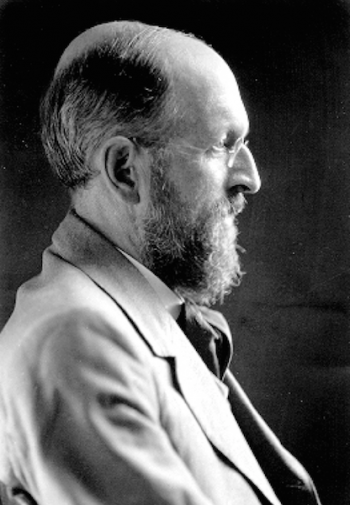 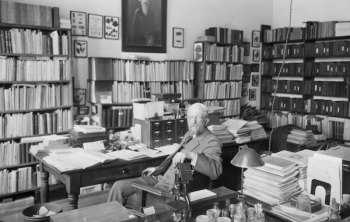 COCKERELL, Theodore Dru Alison (1866-1948), English-born grew zoology professor at the University of Colorado who made several trips to the California Channel Islands in the mid 1930s, including San Miguel, Santa Catalina and San Nicolas islands.

Cockerell was twice married, first in England in 1891 to Ann Sarah Fenn (1858-September 14, 1893). They married in Brentford, Middlesex. Their first son, Austin D. Cockerell (1892-1892), was born and died in Kingston, Jamaica. Their second son, Martin Dru Cockerell (Sept. 9, 1893-November 25, 1901) was born in New Mexico. Cockerell's wife, Ann Sarah Cockerell died five days after giving birth to Martin. Cockerell then married his second wife, Wilmatte Porter in 1900 when Martin was 6 years old. They had no children together, and Martin died of diphtheria when he was 8 years old, two years after Cockerell had remarried. Martin Cockerell is buried in the Masonic Cemetery, Las Vegas, N.M.

Cockerell was noted for his work on North American bees. He worked on specimens brought back by the Los Angeles County Museum Biological Survey, and published his many findings. Both the Lester children of San Miguel Island the Agee children of San Nicolas Island were left with very find memories of his island visits. Cockerell engaged the children in his fieldwork, often drawing pictures and making little books for them.

Cockerell visited San Miguel Island in the late 1930s when the Lester girls were small. Betsy Lester has extremely fond memories of Cockerell, who drew a number of pictures of insects for her. Cockerell visited San Nicolas Island with Loye Miller July 7-16, 1938. At that time Reginald and Evelyn Lamberth lived on the island as managers, with their children Jeanne and Dennis.

Cockerell is quoted as saying: “The scientific man is always on the road, never at the journey's end.”

Cockerell died in San Diego on January 26, 1948. He is buried in Columbia Cemetery, Boulder, Colorado.

September 17, 1948 [Science, v. 108]: Theodore Dru Alison Cockerell 1866-1948. “The scientific man is always on the road, never at the journey's end. Thus wrote Prof. Cockerell, of the University of Colorado, some 12 years before his death on January 26, 1948, at the age of 81, in San Diego, California. His career was the exemplification of his assertion. Decade after decade with tireless devotion he followed the path of knowledge, often blazing a new trail, constantly alert to the things of interest in the landscape about him, eager to become acquainted with the infinite diversity of life, and zealous to make others equally cognizant of it. Yet always there was a horizon beyond, something that awaited completion. Up to that last and undeterred by illness, he gave his failing strength the task of monographing the bees of Honduras. It was fitting that this should be his last scientific endeavor, for from his middle twenties onward bees interested him perhaps more than any other form of life. The constancy of this interest is best evidenced by the fact that up to 1938 he had published 5,480 new names for species, subspecies, and varieties, and 146 names for genera and subgenera. Since 1938 there have been accretions to this total. The description of bees believed to be new was only part of his work. Extensions of the geographic range of species already known was another substantial contribution. Through one channel of publication alone —Annals and Magazine of Natural History— he issued about 200 successive papers devoted to descriptions and records of bees. One student of the bees, Prof. H. Friese, has hazarded the opinion that the total number of species the world over, both described and undescribed, might approximate 20,000. On the basis of this estimate, which is probably not excessive, one can visualize the magnitude of the individual contribution of Prof. Cockerell in making known the diversity and structural significance of the tiny creatures that wither he himself collected or that were sent to him as a gifted specialist.

In the field of entomology there were, however, other rivals that from time to time claimed his attention. At the beginning of his career, during the few years (1891-93) that he served as curator of the Public Museum at Kingston, Jamaica, he selected the Cocidae for special attention and was able to record from Jamaica alone more species than had previously been reported from all the West Indies. His transfer subsequently to New Mexico, where he served successively in the New Mexico Agricultural College and in the Normal University, opened up new opportunities for the study of these insects, as it did for the study of bees. Over the years his active intellect turned to other groups as well, both fossil and recent, and he produced papers dealing with the members of many orders as evidence of his broad interest in the whole field of entomology.

The number of his entomological papers is breathtaking. Those recorded in the Zoological Record from 1888 to 1945 number 1,240, including a few that were written in collaboration with others. In each of at least 15 of those years he published from 30 to 50 papers, and in only one of the years between 1893 and 1937, when he was well beyond the retirement age of most people, did he permit his entomological publications to descend to as low as 10. But what amazes one as much as the output is the diversity of the subject matter. Now and then there might be a dominant trend in the work of a given year. In 1919, for instance, the Philippine bees were evidently the special beneficiaries of his studies, and in 1933 he devoted 18 of a total of 27 papers to African bees. In general, however, he evidenced the range of his interest and his mental elasticity by swiftly turning from fossil to recent, from a given order to an unrelated order, from field experience or description of species to reflective discussion of biologic problems.

While insects claimed the largest measure of his attention and represented the greatest aggregate of publication, hi interest in conchology tended to run in competition with that in entomology. His interest in the snails and the slugs was firmly founded early in his childhood, was reinforced when his family moved, after the premature death of his father, to Margate by the sea, and in a few years reached such a point of development that by the middle '80s, when he was still under 20 (he was born August 22, 1866 at Norwood, England), he was already contributing papers on the Mollusca to scientific publications. In 1886 no less than 17 such papers appeared. Although this maximum was never again attained and the period from at least 1893 onward was to witness a quite conspicuous disproportion in favor of entomological papers over conchological, nevertheless, in the 60 years from 1885 to 1944, there were only 11 in which he failed to contribute at least something on the Mollusca. The aggregate of his publications devoted to these invertebrates exceeds 200 papers.”