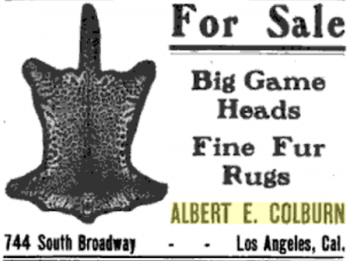 COLBURN, Albert Ernest (1872-1953), born in Washington, D.C., he moved to Los Angeles by 1900 where he became a taxidermist, Los Angeles furrier and entomologist.

Colburn became a member of the Cooper Ornithological Club in 1905. He became a life member in 1915. His address is listed as 806 S. Broadway, Los Angeles, CA.

In 1915 he went to Santa Catalina Island with Irwin D. Nokes.

The eggs he collected at Santa Catalina Island in 1915 and 1915 in the WFVZ are unidentified.

The eggs he collected at Islas Coronados in 1915 in the WFVZ are unidentified.

The 1923 Harrison Williams Galapagos Expedition collected two or three doves for the New York Zoological Park. The actual number is not known to the present compiler, nor is any of their later history, but it is quite possible they were the first to be kept alive in America. Professor E. W. Gifford (1931), who has already described its habits in the wild state, writes : “Mr. Albert E. Colburn of Los Angeles is the possessor of a large collection of living Galapagos Doves. The nucleus of this collection comprised birds brought by him from the islands after a fishing trip. From him I obtained a pair for my aviary in the early part of 1930. When I visited Mr. Colburn’s aviary in December, 1929, there were several pairs with eggs and young. He seemed to be having marked success in propagating the species.” It would seem then that to Mr. Colburn goes the honour of breeding this dove for the first time, presumably in 1928 or 1929, in captivity anywhere. [Aviculture Magazine, 1959].