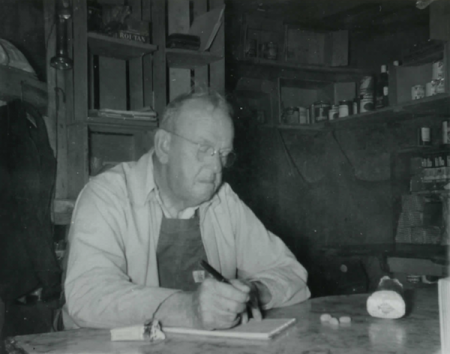 COLCORD, Ralph Mudge (1888-1955) [SS#555-44-2326], World War I veteran and Santa Barbara Museum of Natural History part-time assistant to archaeologist Phil Orr during his work on Santa Rosa Island. Colcord attended Claremont College. He became a regular Staff Assistant for five years, volunteered with Phil Orr from 1948-1953. At the museum, he was affectionately known as “Uncle Ralph.”

January 23, 1951 [SBNP]: “Rugged and windblown are no longer merely adjectives to this reporter [Henry J. Seldis] as far as Santa Rosa Island is concerned. On visiting the campsite of the Fourth Archaeological Expedition of the Santa Barbara Museum of Natural History yesterday, two days before its conclusion, we experienced 50-mile-an-hour winds, four hours of driving in an open jeep from the landing strip to the campsite and back... and discovery which allows men like Phil Orr, Dick Finley and Ralph Colcord of the museum staff to spend months on the island working under the most difficult conditions...”