Difference between revisions of "COMMON POORWILL" 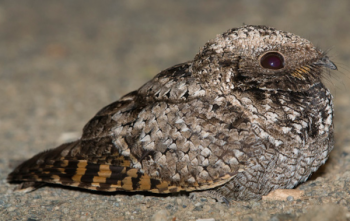 1897 San Clemente Island: “Phalaenoptilus nuttallii californicus—Dusky Poor-will. Heard each evening from March 30 to APril 2; a female was shot March 31. They were on the hillsides back of the Cove. None were seen or heard during the second visit, so this bird was probably only a migrant...The party consisted of Joseph Grinnell, who had immediate charge of the expedition, and gave special attention to the ornithology and entomology of the islands; Horace Gaylord, who collected mammals; and Harry Gaylord and James Brittan [Britton] who devoted their time to archaeology. The party left San Pedro harbor May 11 in a large fishing schooner... [returning June 9, 1897]”
Grinnell, Joseph The Islands of Santa Barbara, San Nicolas and San Clemente, in the Spring of 1897 Pasadena Academy of Sciences Publication No. 1, August, 1897 (26 pages).

1905-1906 Santa Catalina Island: “Phalaenoptilus nuttalli californicus. Dusky Poor-will. Occasionally seen at dusk in the wash back of Avalon. Altho no specimens were taken, the birds seen were probably referable to this form.” [“These notes are the result of two brief sojourns on Santa Catalina Island in the month of April, eight days being spent in 1905, and five in 1906. Fortunately both trips were made after wet seasons; the hills were carpeted with grass, flowers and insects were abundant.”]
Richardson, Charles H., Jr. Spring Notes from Santa Catalina Island The Condor 10(2):65-68, March 1908