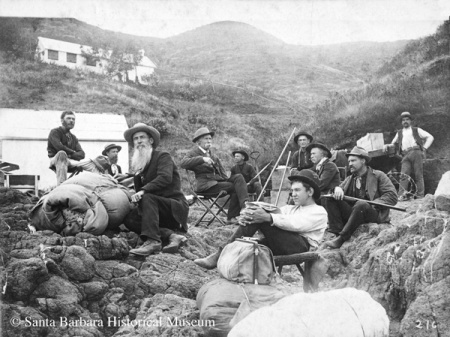 COOK, Isaac Newton (1827-1894), early and prolific Santa Barbara photographer who began taking photographs in the 1860s. In explored and photographed “the weird beauty of rock coves at the eastern end of our Channel Islands” in August 1889 with his assistant Harry Jenkins, local naturalist Lorenzo Yates, and artist Henry Chapman Ford. He sold his studio business to N.H. Reed in 1892. His photographs of various island locations were used to illustrate Martinette Kinsell’s article, The Santa Barbara Islands in Overland Monthly, December 1891.

August 17, 1889 [SBMP]: “The Channel Islands. A ten day’s cruise among their wonderful caverns. One of the most enjoyable places to visit for change of scenery, recreation, and obtaining a good appetite is the eastern of the Channel Islands which is formed by the Anacapas group… Our party consisted of delegations from the Natural History Society, the Grand Army, artists, professional men, mechanics and merchants, the majority of whom were artists and amateur scientists. The artists were Prof. H. C. Ford, Mr. Wm. Ford, and Mr. I. N. Cook the photographer; Mr. I. B. Hardy, contractor, Mr. Wm. Noble and his son, Mr. Harry Jenkins, and the writer. We chartered Captain Elliott’s sloop Brisk, Hugh Walter, Master, and arrived off the Anacapas some time in the first night…”

December 3, 1891 [SBMP]: “The Santa Barbara Islands. The Overland Monthly for December is a peculiarly Santa Barbara publication, this vicinity figuring prominently in at least two of the leading papers. The Santa Barbara Islands, that almost unknown wonderland at our very doors, are glowingly described in a lengthy article by Mrs. Martinette Kinsell of this city, and copiously illustrated with drawings after photographs by I. N. Cook…”