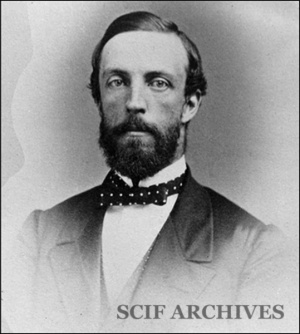 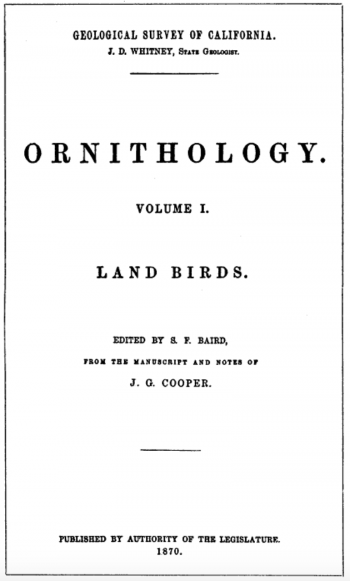 COOPER, James Graham (1830-1902), New York-born physician, ornithologist, field naturalist, and conchologist associated with the California Academy of Sciences. He graduated from the College of Physicians and Surgeons in 1851, spending the two years following in New York hospitals. Cooper served as one of the physicians of the Pacific Railroad Survey Expedition for two years.

Also in 1863, Cooper was elected Curator of Zoology at the annual meeting of the California Academy of Natural Sciences.

January 9, 1866 Cooper married Rosanna McPherson Wells (1843- ), a San Francisco clergyman's daughter. In 1871 Cooper settled in Ventura County, where he remained until 1875. He then moved to Hayward, California where he remained until his death on July 19, 1902. Cooper published may articles on conchology, botany, ornithology, mammalogy, geology, and paleontology.

Spencer F. Baird characterized Cooper's work as: “By far the most valuable contribution to the biography of American birds that has appeared since the time of Audubon.” The authoritative chapter on zoology in T. F. Cronise's Natural Wealth of California (1868) is by Cooper.

Specimens he collected are in the Museum of Vertebrate Zoology, Harvard and the U.S. National Museum of Natural History. Lorenzo Yates modeled his 1890 Mollusca of Santa Barbara County after the work of Cooper. Cooper's Hawk is named in his honor.

COOPER, Dr. James Graham. “Born in New York City, June 19, 1830; died at Hayward, California, July 19, 1902. Army surgeon, naturalist, author of Ornithology of California published in the series of reports of the State Geological Survey, and one of the most prominent resident ornithologists of California. He published a number of shorter papers on birds and contributed extensively on mollusks. The first state ornithological organization, the Cooper Ornithological Club, was named in his honor and he was made its first honorary member. His memory is preserved in Buteo cooperi Cassin (a doubtful species on a bird collected by Dr. Cooper near Mountain View, Santa Clara County, in November, 1855); Melospiza m. cooperi Ridgway, from San Diego; Piranga r. cooperi Ridgway; and Podiceps cooperi Lawrence, a synonym of Colymbus holboelli. Loomis has also proposed Cooper's Shearwater as the common name for Puffinus creatopus, usually known as the Pink-footed Shearwater (Rev. Tubinares, 1918, p. 109).”

July 15, 1863 [letter]: San Pedro, Cal. Dear Professor [Baird], I did not receive your letters of April 24 and May 8 until yesterday, when I arrived here from the islands, having spent the last six weeks on them, 3 of which were unfortunately devoted to Santa Barbara Island where I would have been long enough. I succeeded pretty well however, but would have done better if I could have gone a month earlier in the Coast Survey schooner, which is now here, offered for sale. I have as yet only explored the four southern islands, and may postpone the others until next spring, when there will be more chances of gathering birds and eggs on them. I found few species breeding on Santa Barbara Island… San Clemente I spent five days… On Santa Catalina I spent 17 days and found much more in all classes than on the others…” Smithsonian Institution Archives, RU 6999T Regist., 1834-1958 Access. Rec. #432