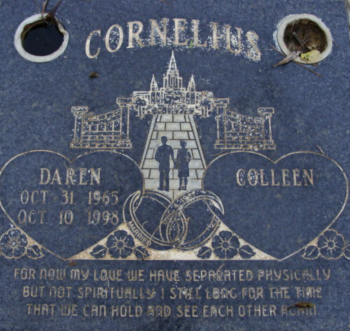 CORNELIUS, Daren James (1965-1998) was born in Contra Costa County, California. He was married on October 4, 1987 in Oakland, California. He and his wife, Colleen Rene Pueblo, had six children. He was 32 years old.

October 11, 1998 [LAT]: “Scuba Diver Pulled From Ocean Dies. A 32-year-old man died Saturday afternoon after scuba diving off the eastern coast of Santa Cruz Island, the U.S. Coast Guard reported. Daren Cornelius of Oakley in Contra Costa County was found in full gear on the ocean floor about 1:20 p.m., said Petty Officer Kerry Kingery of the Coast Guard's Long Beach control center. It was uncertain how deep the water is at that point, and Kingery said ocean conditions Saturday afternoon involved rough currents. Kingery said the cause of the accident and how Cornelius died have not been determined. "Possibly, he may have gotten lost with his [dive] buddy," he said. The incident, which occurred in an area called Yellow Blossom between Santa Cruz and Anacapa islands, was under investigation by the Coast Guard and the Ventura County medical examiner's office. Kingery said a search began after a dive instructor on the 82-foot commercial vessel Vision radioed for help at 12:15 p.m., about an hour after several pairs of people on the boat began diving. There were 43 people on board, officials said. A Coast Guard boat based at Channel Islands Harbor in Oxnard arrived at the dive scene about 12:40 p.m., along with a helicopter dispatched from Los Angeles International Airport. The Coast Guard immediately began air and surface searches while an unidentified dive instructor on the Vision boat and a second diver scoured the ocean floor, Kingery said. Cornelius was found unconscious and had no pulse, Kingery said. Cornelius was pulled to the surface and dive boat personnel administered CPR before he was hoisted into the helicopter and taken to Los Robles Regional Medical Center in Thousand Oaks, where he was pronounced dead on arrival, coroner's officials said. Coast Guard officials said investigators from their Marine Safety Division in Santa Barbara began interviewing boat passengers and dive instructors shortly after Vision arrived back in Santa Barbara, its home base. Coroner's officials said the diving gear worn by Cornelius will be analyzed by a Camarillo firm to determine whether there was equipment failure. Cornelius was married. Vision is owned by Truth Aquatics. The company's owner could not be reached for comment.”

October 12, 1998 [LAT]: “Diving-Trip Death Was a Drowning. A man found unconscious on the ocean floor near Santa Cruz Island drowned, the Ventura County Coroner's office reported Sunday. The man, Daren Cornelius of Oakley in Contra Costa County, was pronounced dead on arrival Saturday afternoon at Los Robles Regional Medical Center after being discovered on the ocean floor in full dive gear. A coroner's official said the official cause of death was asphyxia by drowning. Cornelius was among a group of people diving from an 82-foot commercial vessel, Vision. The Coast Guard is investigating the death. Officials from Santa Barbara-based Truth Aquatics, which owns Vision, could not be reached for comment.”