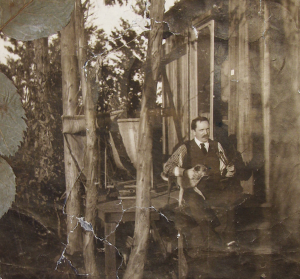 COWLES, John Clifford (1861-1951), was born in Freeport, Illinois on August 21, 1861. Cowles studied painting in Paris at the Sorbonne and was an exponent of the modern French school of painting. He exhibited works in Salt Lake City in 1894 that were highly praised by the local press. Cowles had mining properties in Nevada and Utah. By 1903 he had settled in Los Angeles where he remained until his demise on Feb. 12, 1951.

He was acquainted with Arthur Caire of Santa Cruz Island, and apparently wrote several letters to Caire. According to the family, Cowles “seems to have had quite a taste for the island wine, as he felt it was 'good for what ailed him.' ”

He was the author of The Whispering Buddha. Exh: Calif. State Fair, 1900.

No island paintings have been located to date.