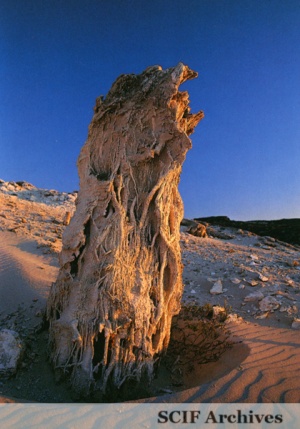 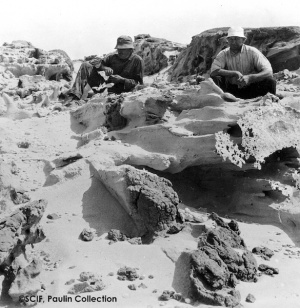 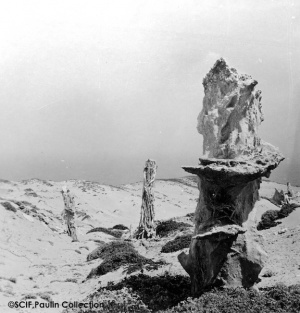 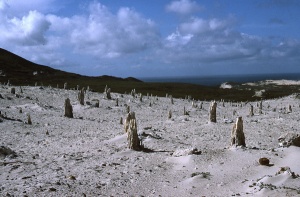 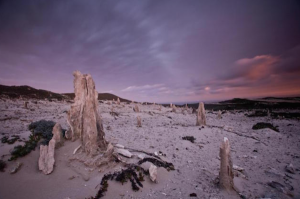 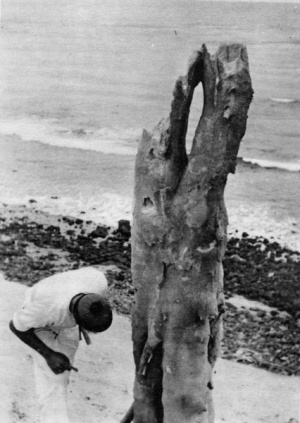 Caliche is derived from the Latin calix meaning lime. Composed largely of calcium carbonate, gravel, sand, silt and clay, caliche forms weird shapes and sizes which have been referred to as “fossil forests” or “rhizoconcretions.” Former trees and root systems turned to caliche form bizarre landscapes, particularly on San Miguel Island. Little or no caliche is found on Santa Cruz, Anacapa and Santa Barbara islands. Caliche on Santa Rosa Island is less dramatic than that on neighboring San Miguel Island to the west.

July 7, 1883 [LAT]: “Island curiosities. The Santa Barbara Press says that the sloop Ocean King, Captain A. Larco, returned to that port last Sunday after a week’s trip to the northern islands. The vessel had on a cargo of twenty-one barrels of seal oil and two tons of seal skins consigned to the Rogers Brothers by the fishers on the islands. Mr. Josiah Doulton, the court reporter, and his son, Les, accompanied Captain Larco on this trip. While at the islands they gathered a large assortment of curiosities. One of them is a petrification of a small tree which is very perfect. Some queer relics of wrecks and the old aboriginal residents were picked up...”

November 13, 1889 [VV]: “San Nicolas Island… In many places may be seen the impressions of roots of trees varying from fine fibers to several inches in thickness. As the stumps and roots decayed, they seemed to be filled with sand which became indurated, and indeed so hard as to clink like metal when struck with a hard substance. The loose sand has blown away and left the roots standing sometimes two or three feet high. In other places thousands of columns of indurated sand may be seen standing from six inches to three or four feet in height… [Steven Bowers]”

1891: “...casts of dead trees and shrubs, whose places in the soil appear to have been filled by concretionary columns of sandstone which stand erect, sometimes projecting from two to four feet above the present surface, like gravestones in a cemetery, showing how the soil in which they grew has been blown away. These again will be covered by sand dunes, which may eventually become solid rock and puzzle geologists of future ages. These casts appear to have been formed by sand falling into the cavities in the soil, the latter having become hardened by exposure to the action of wind and sun, when deprived of the protection of the growth of vegetation; the dead roots of the shrubs decayed, leaving their impress in the mold; these molds filled with sand during the dry season, would, during the rainy season, hold the water which, filling the interstices, furnished the mineral substance which cemented the grains of sand into a solid mass... August 16, 1891” Yates, L. G. On Some Causes which Influence Topographical Changes and Geological Formations in the Channel Islands of California in American Naturalist 26:(1-4), January 1892

January 16, 1894 [SBMP]: “...Dr. Yates had both shells and fossils from the islands, and also a strange growth of decayed wood which, with a sand formation outside, seemed to grow in ghostly shapes all along the shore. It was white and its odd formation made it seem almost weird in its appearance. Discussion followed.”

c. 1910 on San Clemente Island: “ “I remember scuffing over sand-dunes ribbed and shingled by the wind; and I remember a quizzical frown and a look of wonder that came into my companion's eyes and set me staring down upon a weird scene of crumbling dilapidation, impossible on the face if it. It couldn't be, unless... But we sprang on—stumbled down over one bank of disintegrated abalone shells, slid down another till, at last, we stood surrounded by our discovery. White stumps of trees were there—white as the sand, white branches, forks and twigs, all scattered about or protruding from the surface of the dunes until the area resembled a forest destroyed by canon fire. Stooping, I picked up a small fragment of a branch. It crumbled. It was nothing but sand. My comrade's foot, at that instant, plunged itself into a large trunk which immediately fell to pieces, as if made of ashes; and, although on closer observation we perceived that each particle was no more than a tiny granule, these were so crusted together as to resemble the texture of bark or the inner fibre of solid wood. There were unmistakable knots and jutting twigs; but they were sand; they felt and tasted like sand, and compared exactly with the sand upon which we walked. These really uncanny fragments, we thought, must have been buried for ages beneath the dunes before our discovery of them; and, since it was apparent that they could not have withstood a single rain storm, they must have been exhumed by the wind only a few days before our arrival. Some kind of petrification, we thought; but an authority on geology, whom I had the fortune to interview some years later, told me that to his knowledge there was no petrification the texture of which could compare with the phenomenon described... ” [In Mexican Waters by George Banning (1925, p. 5-6)]