Difference between revisions of "California Academy of Sciences" 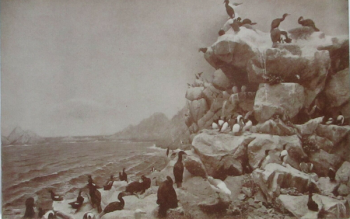 During the 19th century, several women were hired into professional positions, including Alice Eastwood, a botanist, who was hired by the Academy and worked there until she retired in 1949. Eastwood created their collection of rare plants.

The Academy's Market St. facility was destroyed in the 1906 San Francisco earthquake and subsequent fires, with "only a wheelbarrow full of the Academy's library and specimen collections" saved, including Eastwood's specimens.

In 1916, the Academy began development of its facilities in Golden Gate Park with its North American Hall of Birds and Mammals, followed by the Steinhart Aquarium in 1923, the Simson African Hall in 1934, and other facilities. With damage caused by the Loma Prieta earthquake of 1989, the decision was made to completely rebuild the Academy. The $500,000 million project began in 2005 and was reopened in 2008.

The 1905-1906 California Academy of Sciences scientific collecting expedition to the Galápagos Islands (the first of several sponsored by the academy to the archipelago) already was underway when the San Francisco earthquake occurred. It returned seven months later, providing replacement collections for those lost. This 1905-1906 expedition visited multiple Baja California islands en route to Ecuador, including:

The following are known to have visited all eight California Channel Islands:

September 2, 1879 [DAC]: “The regular meeting of the Academy of Sciences was held lst evening, H. C. Hyde the Chair… Several donations to the cabinet were made, the principal being some fish hooks found in a shell mound, 18 feet from the surface, on San Nicolas Island, Santa Barbara Channel…”

June 13, 1897 [SFCall]: “Dr. Gustav Eisen, curator of the department of biology of the [California] Academy of Sciences, has just returned from an exploration trip to Santa Rosa Island and reports that he is highly gratified with what he saw and found there… Santa Rosa Island is about the only place on the coast where abalones can still be obtained. They are still plentiful, although a few years ago the Chinese found out about it and the work of exterminating them is progressing as fast as possible. Last year they secured fifteen tons and expect much more this year…”

January 12, 1905 [SBMP]: “Late arrivals from San Francisco report that the big leatherback turtle that George Gourley caught in the channel last week reached San Francisco, and that it attracted a great deal more attention in the city than it did here. From the time it was unloaded until it was taken to the [California] Academy of Sciences, it was followed by crowds of people who had never before had an opportunity of seeing such a monster tortoise.

March 7, 1911 [LAT]: “Reports reached here today that Mrs. Blanche Trask, who left two months ago to search the deserts for archaeological and botanical specimens for the Academy of Scientists of San Francisco and the Department of Agriculture at Washington has arrived at Thermal, Riverside county. Many specimens of Indian relics have been found and some few rare weeds which have heretofore not been classified… Several years ago, Mrs. Trask commenced to collect products of the early Indians, who formerly inhabited the islands of San Clemente, San Nicolas, San Miguel and Santa Catalina, and her information compiled has been entered upon record with several universities. She is the author of several scientific books.”

October 3, 1912 [LAT]: “J. R. Slevin, of the San Francisco Academy of Science, returned today from a five days’ cruise in the launch Flyer to Santa Barbara Island. He brought back several glass jars of little reptiles and a sack full of live island lizards.”

October 18, 1912 [LAT]: “Prof. J. A. Slevin and two geologists, representing the Academy of Science in California, left today in the chartered launch Neptune for Santa Barbara, San Nicolas and San Clemente islands on a voyage of investigation which may last several weeks. Still other of the Channel Islands in addition to those named may be visited. A search for reptiles common to the various isles will be made and the scientists expect to find many features of interest in their study of natural history. They will spend a week each on Clemente and San Nicolas.

October 19, 1912 [LAT]: “No snakes on San Clemente. After hunting reptiles on the Channel Islands for the past three months, Prof. J. R. Slevin of the [California] Academy of Science of San Francisco, finished a four-day hunt on San Clemente Island and added nine varieties of lizards to his collection. No snakes were found on San Clemente Island… Each specimen has been preserved and will be sent to San Francisco. ‘It is the desire of my department,’ said Prof. Slevin, ‘if possible, to connect the Channel Islands by their reptiles and other scientific proofs. I have found exactly the same species of lizards on San Nicolas, Santa Barbara, Santa Catalina and San Clemente islands. Two of these islands, however, have no snakes…”

September 25, 1917 [SBMP]: “…Miss Eastwood, on behalf of the Academy, very completely botanized Santa Cruz and Catalina islands. On all her exploring trips over these islands, she was accompanied by Mrs. Miller, herself an enthusiastic botanist, and when the two ladies left the sailing party to return home by rail from San Diego a short time ago, they took with then a comprehensive exhibit of the flora of the islands mentioned…”