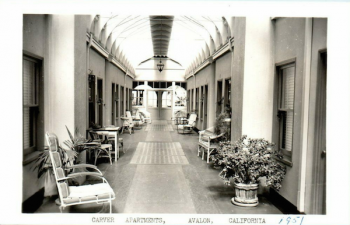 November 25, 2011 [TI/Avalon]: “Couple wed and plan Avalon as their home. Continuing the Carver family's long connection with Avalon, Lisa Moore married Ron Day Nov. 17 at the Wrigley Memorial. Both currently reside in Moab, Utah but hope to very soon become residents of Avalon. In attendance were the bride's mother, Ann Carver Hochberg (Avalon Class of 1961) who is the daughter of the late Dorthee Carver and Frederick Hochberg, Sr. both long time residents of Avalon. Ann is anxious to continue her family's heritage of residency on the Island. Also attending were the daughter of the groom, Anna Day, with her friend, Rob Lingstuyl, both of Salt Lake City, Sandra Putnam and Bob Piacentini of Avalon and Marsha Haney of Westwood. Eileen Van Wuyckhuyse of Moab was maid of honor, while Julie Glass officiated. The bride also has a daughter, Jessica Stephens of Moab. The bride's great-grandparents, Chesney and Amy Carver moved to Avalon as early pioneers (during the Banning years), began the creamery and built The Carver Building on Crescent Avenue (currently where the Vista del Mar is located.) During the Carver years it housed the Carver Apartments, a tea room, grocery, pharmacy (complete with soda fountain where Tini Voci worked) and various other businesses. During the years the Hochbergs owned the property, it was called The Campo Bravo. The bride's grandfather, Fred Hochberg, had an accounting office in the Campo Bravo and this was where he worked on his other local activities which included being an active member of the Rotary Club, Mayor of Avalon in the 1960s and first manager of Descanso Beach Club. Fred was instrumental in bringing to Avalon the mariachi band, Los Camperos de Nati Cano who strolled the streets of Avalon between the Steamer's arrival and departure. Fred's other accomplishments included working in Nicaragua on the building of the Pan American Highway, member of MENSA and founder of Los Aficionados de los Angeles. When Fred left Avalon in 1966, he joined the architectural firm of William Pereira & Associates AIA as CFO. The Pereira firm created land use master plan proposals for both avalon and the Island in the 1960s.”