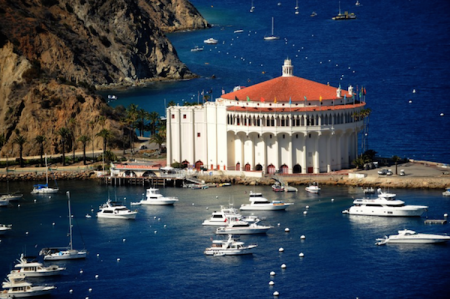 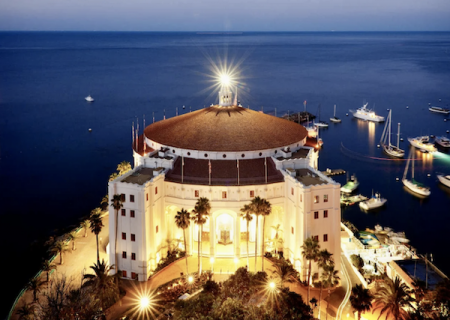 A first smaller casino (1918-1928), designed for William Wrigley, Jr. and built at Sugar Loaf Point, was too small to accommodate the island's growing visitation. Its octagonal steel frame was removed in February 1928 to make way for the large Sugar Loaf Casino, which opened on May 29, 1929. The iconic Sugar Loaf rock was blasted away in March 1929 to improve the view of the magnificent new casino building.

The casino was designed for William Wrigley, Jr. by architects Sumner A. Spaulding and William Webber, who designed the building with a ballroom over a movie theatre in the Moorish Alhambra style, with Art Deco fixtures, furnishings and artwork. The construction of the building lasted 14 months with crews working around the clock.

Artist John Gabriel Beckman was commissioned to decorate the interior of the theatre and the main entrance foyer with extensive murals. The theatre was originally built to accommodate 1250 moviegoers and was one of the first theaters in America retrofitted for both silent and sound motion pictures. The ballroom was designed and built with a cantilever construction that made possible an expansive circular dance floor without supporting pillars. A soda fountain, known as the Marine Bar was built and a beautiful circular terrace surrounding the ballroom added a finishing touch. The Casino opened to the public on May 29, 1929 – a landmark building that remains an architectural wonder and has served as a place if entertainment for residents and visitors for 78 years.

The ballroom dance floor was carefully constructed of maple, white oak and rosewood that rest on a layer of felt and acoustical paper. The felt and paper are installed over a subfloor of pine that floats above support beams on strips of cork. Such careful attention was given to the dance floor to ensure a smooth and comfortable dancing experience for the buildings many visitors.

The Casino opening on Wednesday, May 29, 1929, featured festivities which included marching bands and a screening of Douglas Fairbanks’ The Iron Mask. It attracted thousands of curiosity seekers as well as various Hollywood stars who trekked out to Avalon for the spectacle in the small town of Avalon. The theater contains many secrets, including a fire hose which was hidden in the beautiful lobby as well as a secret door just behind the curtain at the back of the theater, which led to a large, hidden space containing dozens of barrels of food and water. (The theater still serves as Avalon’s civil-defense shelter.) Avalon Theatre was the first cinema built for films with sound. Numerous Hollywood celebrities — from a pre-fame Marilyn Monroe, a onetime resident of Avalon, to Harry Houdini, Charlie Chaplin, Paulette Goddard, Jacques Cousteau, Errol Flynn, Charles Laughton and Louis B. Mayer — worked and played on the island. The top floor of the Casino is home to the Catalina Ballroom. After 90 years of operations and entertainment, the theatre closed after New Year's eve, 2019.

November 12, 2019 [Variety]: “Avalon Theatre Owner Blames Streaming Services for ‘Upside-Down’ Attendance. After 90 years as a haven for movie buffs on Catalina Island, the Avalon Theatre in the Catalina Casino is ending its run as a traditional film venue. The theater won’t be permanently closing its doors, but the Catalina Island Company announced the venue, located on Santa Catalina Island off the coast of Los Angeles, is moving from a first-run theater into a repertory showcase. “It’s just not a sustainable movie theater,” Catalina Casino CEO Randy Herrel told Variety. “Attendance is upside-down. It’s only gotten worse.” In a town of 4,000 residents, it became increasingly difficult to routinely fill the theater of some 1,184 seats. Over the past year, Avalon Theatre found that 85% of movies shown had just 42 people in attendance per night. Sparse attendance is not for lack of investment. In the last five years, the Catalina Island Company gave the theater a makeover, installed a new sound system and screen, and repaired the 43-foot high dome ceiling to enhance the moviegoing experience for its patrons. Avalon also started offering a wider range of dining and beverage options like pizza, hot dogs, and a bar in addition to traditional movie snacks. But Herrell points to the rise in streaming services for the direct decline in ticket sales.”

December 2, 2019 [LAT]: “This theater has attracted movie stars and Catalina Island residents for 90 years. Now, it may call it a night. Lifelong friends Melinda Benson and Wendy Hernandez wept as the closing credits rolled for “Frozen 2” at the Avalon Theater in Catalina Island. But their tears had nothing to do with the movie. Around them, children ran up and down the aisles of the 1,184-seat movie palace, built in 1929 as part of the iconic Catalina Casino and the first cinema in the world designed for talkies. Adults admired the epic Art Deco murals on the walls and craned their necks to look at the silver-leaf stars that twinkled from the ceiling like the sky outside. Screen legends from Charlie Chaplin to Louis B. Mayer to Marilyn Monroe long used the Avalon for premieres and showcases. For Catalina longtimers like Benson and Hernandez, both 48, it was more than just a stage for the stars; it was the setting for first dates and high school graduations and nights out with the kids. “It was a fun, safe place for teens, in an island where there was almost nothing to do,” Hernandez said. “You get your girlfriends together and go off alone together, and your parents didn’t have to worry.” Added Benson: “As corny as it sounds, the Avalon was a way for me to see and imagine the world. It was so big and special and magical. Other theaters were like nothing compared to it. “ And now, it was time to say goodbye. At the end of this year, the Avalon will stop showing first-run films for good, ending a 90-year tradition. The Catalina Island Co., its owner and operator and the main landlord around town, plans to continue daily tours and offer up the theater for special events like the long-running Catalina Film Fest and Silent Film Benefit.

Chief Executive Randy Herrel said not enough people attend the new flicks to make the Avalon financially viable. He said it needs at least 137 theatergoers every night to break even; average attendance this year, excluding blockbusters like the live-action “Lion King” remake, is just 37. “It’s not going to get any better for our movie theater,” he said. “What small town that has 4,000 population has a 1,000-seat theater that’s still open?” The last straw for Herrel was a drive through Avalon earlier this year on one of Catalina’s signature golf carts. “There were so many satellite dishes screwed onto balconies,” he said. “We have no support from the town for the current movies showing…Everyone’s throwing rocks, but no one is coming up with good, viable, sustainable solutions.” That cold economics doesn’t compute with a lot of residents. “It’s indefensible,” said Hernandez, who manages a spa on the island. “A company that big can’t use the excuse of lack of money for closing it down.” “I’m not convinced this closure is necessary,” Benson added. “The experience for us is like a birthright.” She now lives “over town,” Catalina-speak for the mainland. Benson launched a Change.org petition three weeks asking Herrel to keep the Avalon’s nightly screenings. It currently boasts over 11,500 signatures — which is nearly three times Catalina’s year-round population. As a 5-year-old, local historian Chuck Liddell used to give out theater handbills to beachgoers back when the Avalon showed a new film every night. Now 72, he sympathizes somewhat with the Catalina Island Co.'s situation; theymust show the same film for two weeks straight because of studio requirements. Even accounting for tourists, that doesn’t seem a formula to pull in regular customers in a community this small. “They’re stuck, they can’t do much,” Liddell said. “I think we gotta put our money where our mouth is, and stop complaining.” Then again, Liddell admits that “there were two stipulations I’ve always had that if I lost either of these, for the first time I would feel like I needed to leave the island. And one was to be told that you can’t see a movie in the Avalon.” It’s the latest turn in the saga of an edifice whose architects told the press back in 1928 that the theater and its accompanying casino “will be a contribution to western culture and architecture, rather than a business enterprise.” Built for $2 million by chewing-gum magnate William Wrigley just before the Great Depression, the Avalon is one of the few Old Hollywood theaters left in Southern California that specializes in contemporary movies instead of just revivals. But it has struggled to attract large crowds ever since the advent of television. As recently as the 1980s, the Avalon opened only for weekends during the winter. Catalina lost its luster for the Hollywood set and the theater’s stewards allowed its grandeur to fade away until a $750,000 restoration in 1994 saw all the seats reupholstered and the murals brushed clean of grime. In recent years, the Island Co. upgraded the theater’s sound system, switched to a digital projector, replaced the movie screen, and even began to sell alcoholic beverages and pizza in order to boost ticket sales. They introduced more classic movies and performances on the massive theater organ every Friday and Saturday evening. But attendance, which averaged between 400 and 500 during summer nights as recently as 2002, continued to crater. Herrel said that the Catalina Island Co. is talking to a music-promotion group about doing concerts at the Avalon and a “well-known comedy theater” to fill the space. But Ron Truppa, who runs the Catalina Film Festival, argues that today’s movie lords should help keep the Avalon as it is. He has led backstage tours for everyone from William H. Macy to Sharon Stone to Nicolas Cage, who recorded a video declaring the Avalon “my favorite theater in the world.” “When we have these celebrities come through here and they experience it for the first time, it’s like that little-kid feeling all over again,” he said. “It humbles them. Jon Favreau was like a kid in a candy store when he saw the projection room. But since the theater is in Avalon, it’s like out of sight, out of mind. The daily screenings are kind of what kept it breathing and made it a living organism.”

The Avalon certainly buzzed with excitement on the night Benson and Hernandez attended. So many people showed up — 250 — that “Frozen 2" started 15 minutes late. The audience acted as if it was just another night, as they munched on popcorn and Reese’s Pieces and quieted babies and laughed at the antics of Olaf the snowman. But melancholy set in once the lights went up. “It would be a horrible loss to our community,” said Rachel Hammer, 35, of San Clemente. “Closing the theater is going to take it away from the next generation.” “Every resident here should be able to come outside of a tour,” said fifth-generation Catalinan Andrea Carstaphen, who met childhood pals Benson and Hernandez outside the Avalon to ask how she could help. “It’s such a part of our hearts.”

She delivered the Change.org petition to the Catalina Island Co., along with testimonials from others. Inside, 13-year-old friends Alexa Moronez and Jocelyn Reyes lingered in the lobby, ringed with black-walnut panels and gold-leaf accents. Pre-teens bounced on the vintage couches. “This has always been known for those of us who’ve grown up here as a theater to see movies with each other,” Alexa said. “Now, it’s going to be known as just a building.”