Difference between revisions of "Casino" 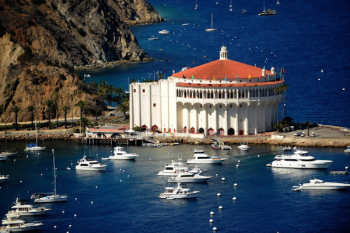 A first smaller casino (1918-1928), designed for William Wrigley, Jr. and built at Sugar Loaf Point, was too small to accommodate the island's growing visitation. It was razed to make way for the large Sugar Loaf Casino, which opened on May 29, 1929.

November 12, 2019 [Variety]: “Avalon Theatre Owner Blames Streaming Services for ‘Upside-Down’ Attendance. After 90 years as a haven for movie buffs on Catalina Island, the Avalon Theatre in the Catalina Casino is ending its run as a traditional film venue.

The theater won’t be permanently closing its doors, but the Catalina Island Company announced the venue, located on Santa Catalina Island off the coast of Los Angeles, is moving from a first-run theater into a repertory showcase.

In a town of 4,000 residents, it became increasingly difficult to routinely fill the theater of some 1,184 seats. Over the past year, Avalon Theatre found that 85% of movies shown had just 42 people in attendance per night.

Sparse attendance is not for lack of investment. In the last five years, the Catalina Island Company gave the theater a makeover, installed a new sound system and screen, and repaired the 43-foot high dome ceiling to enhance the moviegoing experience for its patrons. Avalon also started offering a wider range of dining and beverage options like pizza, hot dogs, and a bar in addition to traditional movie snacks. But Herrell points to the rise in streaming services for the direct decline in ticket sales.”