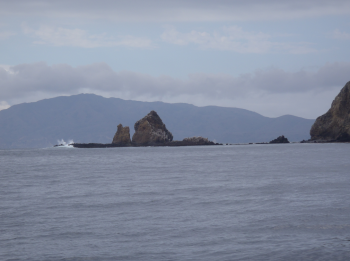 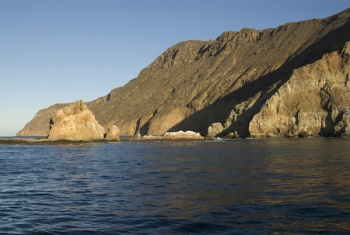 Cat Rock, Anacapa Island is located offshore on the south side of West Anacapa. The 81-foot peak of the rock was used as a survey point in 1933 by C. K. Greene who did not mark the point. Today it is a popular dive spot.

Cat Rock was a favorite place for oologists to collect eggs. Xantus Murrelet (Brachyramphus hypoleucus) egg sets at the Western Foundation of Vertebrate Zoology [WFVZ] include:

Feral cats once preyed on nesting sea birds, presumably resulting in the name, Cat Rock. It is accessible at low tide.

Cat Rock is one of several sites at Anacapa where giant black sea bass are often seen. They were reduced to near extinction from over fishing and incidental catch in gill nets, which are now illegal within a mile of the shore.

October 4, 1974 [LAT]: “Equipment of two experienced divers who died in unrelated accidents off Anacapa Island was examined for possible malfunctions. One victim was Air Force Captain Frank Dugan, 34, of Edwards Air Force Base who had been scuba diving for seven years and was an instructor. He was found floating by others with whom he had chartered a boat for lobster diving. In the same general area, Mark Inouye, 23, of Gardena, a veteran commercial diver, was found dead on the bottom in 35 feet of water at Anacapa’s Cat Rock where he and other divers of the vessel Joini-Air were gathering sea urchins.”