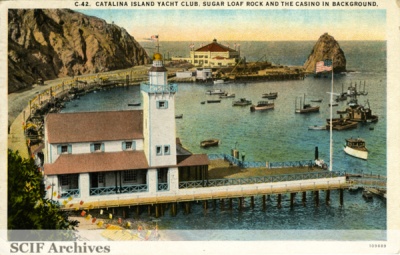 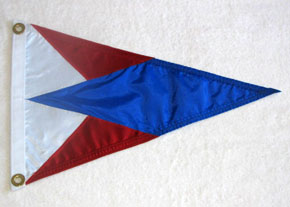 Catalina Island Yacht Club is one of the oldest yacht clubs on the West Coast. The historic club, located on the Avalon waterfront, was founded in 1924.

An initial island yacht club was founded on March 28, 1892 as the Catalina Yacht Club [CYC] by the Banning brothers who owed Catalina Island before the Wrigley Family:

The Catalina Yacht Club [CYC] never got off the ground and was disbanded on May 15, 1914. In the meantime, the Sophia Yacht Club [SYC], formed in 1903, transformed into the Catalina Motor Boat Club, had begun construction of a facility at the beach. Although the first pilings and floor were placed as early as 1903, no further construction occurred. Boat builder, J. E. “Pard” Mathewson built his boat shop at the location, but the Avalon fire of 1915 destroyed the facility.

In early 1924, James Jump and others decided to organize the new Catalina Island Yacht Club [CIYC]. The initial lease with the Santa Catalina Island Company was executed on February 1, 1924. Club Commodore was Jimmy Jump. Attorney was Ralph Bandini. Eighteen members of the Tuna Club provided the capital to build the yacht club facility utilizing the Catalina Motor Boat Club [Sophia Yacht Club] pier site. Classes of membership were set, with all property being vested in no more than 30 charter members, each of whom had to own or have a substantial interest in a boat. Each charter member provided a loan of $400 to the club. The Santa Catalina Island Company, under the direction of D. M. Renton, constructed a two-story frame club house on the existing pier foundation. Club Opening Day was August 23, 1924.

By 1931 membership reached 270 before declining with the Depression. During the War years, from 1942 to 1945, Catalina Island was largely closed to the public and Catalina Island Yacht Club facility was used by the Navy and Merchant Marine.

Catalina Island Yacht Club Club members have included many well-known Hollywood personalities including Jack Warner, Rudolph Valentino, Tom Mix, James Cagney, and Darryl Zanuck. The iconic clubhouse is among the most important and photographed landmarks on the Island of Catalina.

June 3, 1925 [TI/Avalon]: “Catalina Island Yacht Club formal opening and banquet, season of 1925. By Charles H. Smith. Avalon Bay never looked quite so gay as on Saturday and Sunday, when pleasure craft in great variety, from the large stately power yacht to the graceful little Star sailing sloop, gathered on its placid waters, bringing many yachtsmen and their fair feminine friends from near and far to celebrate the formal opening of the Catalina Island Yacht Club for the season of 1925. Naturally, the beautiful clubhouse of this young organization of yachtsmen was the central attraction for the many visitors. The prince of secretaries, Ed Abbott, gave everybody a cordial greeting, and showed them through the beautiful building. Many were the worthy words of praise bestowed because of the lovely furnishings and general comfortable conveniences provided for the ease and pleasure of the members and their friends. The elegant wicker-work chairs and settees, the handsome rugs, the tasteful decorations, the beautiful paintings on the walls, the neat office of the secretary, the convenient rest rooms for both men and women, the attractive array of signal flags, the flashing light in the tall tower — in fact, the general motif of the clubhouse throughout, were enthusiastically and favorable commented upon. An exhibit of special interest was the glittering array of silver cups of elegant designs which are to be offered as prizes in the several Club tournaments this season. The first one will take place july 4th. There will be another on Labor Day, and possibly others. Full particulars concerning these events will be given later. The annual dinner was partaken of in the banquet hall of the Hotel St. Catherine, and the personnel of the company was an attractive one. Men of muscle, bronzed by the salt sea breezes; slim school lads, yearning to become full-fledged yachtsmen — and ladies, sweet and lissom, stately and attractive, lent their presence to the busy scene. As always at this caravansary, the dinner itself was superb, and its appetizing qualities were but added to by the pleasant social converse as the meal progressed. Following dinner there was a general return to the clubhouse, where the floor had been cleared for dancing.”

April 8, 2017 [The Log]: “Catalina Island Yacht Club has a new lease with the city of Avalon, as the two parties came to an accord during the City Council’s April 4 meeting. The Yacht Club will remain at its current location through 2023 and have an option to extend lease terms an additional 10 years. Current lease terms were set to expire in 2020. Avalon city officials offered the yacht club a three-year extension and 10-year option in July 2016. Club leadership, however, sought a longer extension term. Both parties, however, finally agreed to the July 2016 offer after a nine-month delay. Original story 7/20/2017: A planned discussion on lease extension talks to keep Catalina Island Yacht Club at its current waterfront location in Avalon was postponed to a later meeting, according to City Manager David Jinkens. The yacht club lease extension was to be discussed at Avalon City Council’s March 21 meeting. However a representative from Catalina Island YC (or CIYC) was not able to attend the meeting. Catalina Island YC hopes to continue its lease arrangement with the city of Avalon, but final terms of the extension have not yet been finalized. Yacht club staff sought a longer lease with the city, however both sides need more time to negotiate certain details, according to Avalon city staff. “While the CIYC management would like a longer term lease that conforms to previous city extensions they understand that more time is needed to discuss and negotiate terms and the bases and rationale for a longer-term lease,” city staff stated in a report to council members. “City management has suggested … the basis for a longer term lease could be agreement by the CIYC to provide financial support for construction of a new city-owned recreational facility in the harbor area.” Both sides will come to terms on a lease extension, city staff added; it’s just a matter of determining the length of the lease extension. City officials had most recently proposed an extension through 2023, with an option to extend another 10 years. Catalina Island YC’s headquarter was built in 1924. The club funded its construction. The yacht club could remain at its current location through 2033 should both parties reach amenable terms. Current lease terms, last extended in 1995, were originally set to expire in 2020. An agreement could be finalized later this year.”