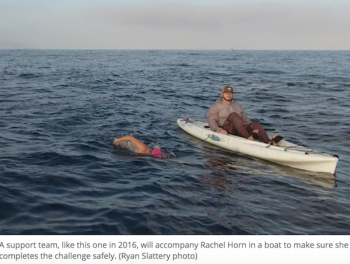 August 10, 1978 [PC]: “Cindy Cleveland touched dry land at Oxnard’s Silver Strand Beach at 10:09 this morning, becoming the first person to ever swim across the Santa Barbara Channel. Ms. Cleveland, 23, of Redondo Beach, made the double crossing in a record time of 12 hours, 48 minutes and 20 seconds, more than 7 hours faster than her trainer had hoped for. The crossing was made under ideal conditions, according to Dr. Jeff Dyyre, who was aboard the boat which accompanied Ms. Cleveland on the crossing. Her main goal was to get to Anacapa Island, her trainer, Hans Albrecht, said Monday. Albrecht was hoping she would be able to make the return swim, but he said that decision would be left until they got to the island. ‘If she can make the return trip,’ Albercht said at the time, ‘that will be the icing on the cake.’ Dwyre said that the water temperature, considered to be one of the most dangerous aspects of this crossing, was 68 to 69 degrees the whole way. That temperature, according to Dwyre, was comparable to the temperature of the San Pedro channel during Ms. Cleveland’s swim to and from Catalina Island last year. The crew was unable to find a beach when Cindy arrived at Anacapa between 3 and 4 A.M. today. So she touched the rock face, pushed off and headed back, Dwyre said. ‘It was just like she was in a pool,’ he related. Talking with the crowd who greeted her at Silver Strand, Cindy said the swim was fun, and easier than the Catalina swim. The swim to and from Anacapa was estimated by her trainer at about 22 miles, much shorter than the Catalina crossing, about 20 miles one way. As she smiled, a reported yelled, ‘Leave it to a woman, guys, to show you the way.’ ‘The crew was great,’ Ms. Cleveland said. ‘They kept my spirits up, kept me entertained, and made comments about my strokes. They kept track of my stroke rate.’ Dwyre said Cindy’s stroke rate did not vary significantly during the night. ‘She stayed between 75 and 80 strokes a minute the whole time, he said.’ Dwyre said a competitive 1500 meter swimmer averages about 80 to 85 strokes a minute. Ms. Cleveland’s triumps comes close on the heels of an unsuccessful attempt by Dave Yudovin, 27, of Tarzana, to swim from Anacapa to the mainland. Yudovin’s attempt July 19 ended 500 yards short of a one way crossing. He was pulled from the water unconscious.”

October 11, 2001 [VCS]: “Huffing and puffing and shaking off a slight chill, Scott Zornig emerged dripping and triumphant from ocean waters Wednesday, having completed a 12-mile swim from Anacapa Island to the Ventura County coast in record time....”

September 25, 2012 [Swimming World Magazine]: “At just 13 years old, Fiona Goh became the youngest female swimmer to swim solo from a California Channel Island to the California mainland, as reported by the Rancho Santa Margarita Patch. The 12-mile swim took Goh just over 10 hours to complete. She started her swim at 4:30 in the morning, battling an array of active sea life to make her way from Anacapa Island to Silver Strand beach in Oxnard, California. The swim took place this past weekend, breaking a four-decades-old record previously set on August 14, 1971. It is reported that Stacy Frezonki, the former record holder, was 14 years old when she swam from Catalina Island to the California mainland. ‘Fiona started her swim at 4:30 a.m. yesterday morning in 65 degree water,’ Santa Barbara Channel Swim Association president Scott Zornig said in a press release. ‘The marine life was very active during her swim as she encountered rays, jelly fish, a pod of dolphins, a half dozen seals and 2 blue whales which breached less than a few hundred yards from her. There are few adults who possess the intestinal fortitude to complete such an endeavor, and only one 13-year-old that I am aware of.’ According to Zornig, there have been approximately 350 solo marathon swims starting from the eight Channel Islands since 1927. Goh recently started her freshman year at Santa Margarita Catholic, and will compete on her school's swim and water polo teams.”

July 11, 2020 [Sports360AZ.com]: “A rising high school senior member of the Arizona State Champion Brophy Swim Team was the first to swim an open water marathon at Santa Barbara Channel after COVID-19 restrictions were implemented. Henry Palmer, 17, says these times have inspired him to keep pushing forward and find new ways to challenge himself. He hopes to inspire others and remind people that this is not the time to give up, but to work harder. “I just wanted to find a new way to challenge myself outside the pool, and do something kids my age have never done before,” said Palmer. “Really just try to inspire people and prove to myself that we do not have limitations specially during COVID-19, this is the time to slow down and not give up, it’s a time to find new ways to excel,” said Palmer. Palmer started off at Hollywood Beach in Oxnard, California with the goal to finish in Anacapa Island. What was believed to be a 12.2 mile course ended up to be 14.3 miles as Palmer faced an obstacle in the water and a strong current against him. Palmer began swimming at 2:30am, and reached the Anacapa shore 6.5 hours later. Palmer swam with no wetsuit in 59 degree water, and covered himself in baby lotion. A technique the athlete likes to do in order to protect his skin from the harsh conditions. “The first three hours were definitely the hardest experience of my life. I couldn’t see anything around me except some flashing lights. The water was 800 feet deep, I had no idea what was underneath me. I was completely vulnerable,” said Palmer. Palmer says the experience was like no other and his drive to keep going came from his goal to become the first young male to complete the California Triple Crown. “Just the thrill of being vulnerable with nature is just a feeling that I cannot find anywhere else and the water was 59 degrees from the start, which is way colder than I have ever swam in. My teeth were chattering, I was shivering all over, my whole body was shaking, I thought I was going to get hypothermia,” said Palmer. “For the first hour I wanted to quit. I thought I could stop right there and no one would judge me, and then something just deep within me kept telling me ‘you got this, keep going, this is what you signed up for and you can do this.’”