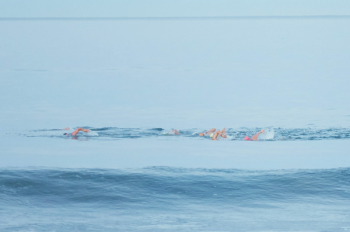 No one person has completed this swim to date.

October 14, 2015 [la.curbed.com]]: “ Six Swimmers Have Become the First to Cross the Channel Between San Nicolas Island and LA. Six swimmers out of Ventura, most of them older than 40, have become the first group to cross the channel between San Nicolas Island and San Pedro, tackling 70 miles of huge swells, strong currents, sharks, and jellyfish in 33 hours 37 minutes and 26 seconds, reports the New York Times. San Nicolas Island is the farthest of Southern California's eight channel islands, lying off beyond Catalina Island (the Catalina/mainland crossing is considered the second hardest challenge in open-water swimming); it's most famous for its role in the book Island of the Blue Dolphins and today is occupied solely by the US Navy (the swimmers had to get permission to start their swim there, since rules require they start on dry land). In "sanctioned open-water swims," swimmers relay, spending an hour each in the water, with a kayaker accompaniment and a support boat; a swimmer can tread water if she gets tired, but if anyone gives up, the swim is disqualified. Six members of the Ventura-based Deep Enders—Zach Jirkovsky, Tamie Stewart, Jim McConica, John Chung, Stacey Warmuth, Tom Ball—paid $12,000 out of pocket on the attempt (they don't have sponsors), with family members acting as kayakers. Jirkovsky began the swim early on Monday morning and the journey was pretty smooth into the afternoon, when a seven-foot swell kicked up about 20 miles in, near Santa Barbara Island, which creates a strong current. They'd been averaging 5,200 yards an hour but most could barely hit 900 yards at that point; then the sun went down and there was no moon. One swimmers tells the Times "All of us have swum in the middle of the night before, but it had never been quite this dark." Another said she "felt like I was in a washing machine." Conditions stayed rough into Tuesday morning. The swimmers, who are not allowed to wear wet suits or rash guards, were also being stung perpetually by jellyfish and occasionally trailed by sharks (one got close enough that it looked like the swimmer might have to get out of the water and end the swim). But the current turned toward their backs midmorning on Tuesday and the group arrived at the Palos Verdes Peninsula at 4:52 pm swimming together in V formation.”