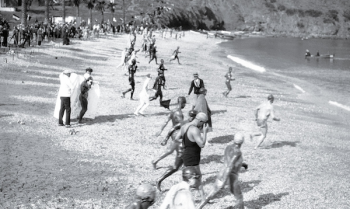 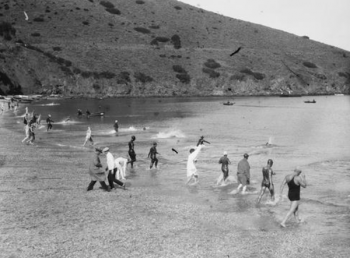 William Wrigley, Jr. initiated the Wrigley Ocean Marathon on January 15, 1927, offering a $25,000 prize to anyone who could swim the Catalina Channel. $15,000 was offered to the first woman to finish, if the prize should be won by a man. The swim began at Isthmus Cove at 11:24 A.M. and went to the San Pedro breakwater. A rowboat accompanied each contestant, and a small fleet of powerboats remained close at hand. Of the 102 entrants, 17-year-old Canadian, George Young, won the $25,000 with a crossing time of 15 hours 44 minutes, landing at Portuguese Bend at 3:08 A.M. Of more than 100 entrants, he was the only one to finish the race.

Two women, Margaret Hauser of Long Beach and Martha Stager of Portland, OR, were awarded prize money, despite not completing the race. Only a mile from the finish line, Hauser was pulled from the water by her husband/trainer after 19 hours and 26 minutes, making her the contestant who lasted the longest. When Wrigley heard the news, he said, "Shucks! That's too bad. Give them each $2500 for their remarkable attempts."

The race was broadcast from aboard the S.S. Avalon, which served as the hospital ship for the swimmers as they attempted the crossing. Today the Catalina Channel Swimming Federation governs, supports and promotes cross-channel swimming between Santa Catalina Island and the mainland. Now more than 80 years after the first channel crossing, according to the Catalina Channel Swimming Federation, more than 200 people have successfully completed their attempts.

September 15, 1926 [TI/Avalon]: “The Catalina Channel ‘froze’ the efforts of another swimmer Saturday night when Miss Dodie Blewett of the Club Casa Del Mar was forced to give up her first attempt to swim from Point Vincent on the mainland to Avalon Bay. Miss Blewett was in the water 57 minutes. She traveled two miles before cramps and the cold water forced her trainer and coach, Frank P. Holborow, to take the young lady from the water…”

February 14, 1927 [Time]: “Guzzling orange juice, milk and broth, munching chocolate, losing 17 pounds, Henry F. Sullivan of Lowell, Mass., swam from Santa Catalina Island to the California mainland last week in 22 hours, 45 minutes. He had previously failed to finish in William Wrigley Jr.'s $25,000 nautical derby over the same course which 17-year-old George Young of Toronto completed in 15 hr. 44 min. (TIME, Jan. 24). Five dawns later, a large woman floundered stupidly in the tide-rips off Point Vicente. She had been swimming all night. Her breast and left arm had been lacerated by a savage barracuda. For a quarter of an hour, while her body lolled like a dying squid, she babbled idly among the waves. From a small boat nearby, her 11-year-old son called out anxiously. Men's voices growled advice. The large woman, momentarily dazed by exertion, then remembered she was Mrs. Myrtle Huddleston, proprietor of a Long Beach, Calif., beauty parlor. Four months ago she could not swim a stroke. Now, after lessons from admirers who had seen she was designed to swim by Nature, she had almost swum the Catalina Channel. She began again her laborious strokes . . . reached the oily shore swells . . . was swept toward a ragged reef . . . caught her footing, stood up, collapsed on her face. . . The men hoisted her into the rowboat. Her time was 20 hr., 42 min. She had eaten nothing. Greasy and tear-drenched, she lay in blankets on the cruiser Ramona. "O, Mom, you did it, dog-gone you, you did it," sobbed 11-year-old Everett Huddleston. ‘I did it for you,’ muttered Mrs. Huddleston. Long Beach, Calif., looked forward to new beauty treatments: ‘The Huddleston Grease Pack,’ ‘The Catalina Clip,’ ‘The Huddle (Shampoo).”

December 21, 1927 [TI/Avalon]: “George Young, Catalina Channel swimmer, realized $38,000 from his achievement, it was revealed in Judge Desmond's court the other day, says Long Beach Press-Telegram, where an accounting of the 18-year-old youth's fortune was made. Of this amount, $25,000 is the prize received by the swimmer and is held in trust by the Los Angeles First National Trust and Savings Bank. This amount is still intact, since only the income is paid to Young and his mother, the $25,000 to be paid when Young reaches the age of 30. An additional $13,000 accruing from the feat through theatrical engagements and written articles already has been spent.”

February 14, 1930 [LAT/HB]: “Walter Tabor, oil worker and well-known swimmer of Huntington Beach, will again attempt to swim the channel between Huntington Beach and Catalina Island... Tabor claims that he swam the channel in 1926 when channel swimming was popular. He wants to prove his prowess.”

February 8, 1937 [Time]: “Died. Myrtle Huddleston, 39, first woman to complete the 20-mile swim from Catalina Island to the California mainland (1927); of heart disease; in San Francisco. During her Catalina swim she was bitten about the arms by a barracuda, landed after 20 hr. 42 min. with her left side paralyzed. In 1931 in a Manhattan pool she set a world's swimming endurance record of 87 hr. 47 sec.”

February 15, 1937 [LT]: “Mrs. Myrtle Huddleston, who was the first woman to swim the 20 miles between Catalina Island and California won the world endurance record of 85 hours and 15 minutes in the water at Rockaway Beach Pool, Long Island, in July, 1930, died on Saturday at San Francisco at the age of 39.”

July 22, 1938 [REG]: “Barrel-chested Paul Chotteau, aquatic violinist, tomorrow will set out on a fifty-six mile ocean swim from Santa Barbara Island to this beach resort… Two years ago, after six previous attempts, the 46-year-old Frenchman swam from Santa Catalina Island to Santa Monica, a distance of 44 miles, in 33 hours. A Paris-trained musician, he swims for the fun of it, he says.”

October 15, 1957 [LAT]: “Jason Zirganos, 48-year old retired army major from Volos, Greece, swam the Catalina Channel from the island to the mainland in 17 hours yesterday. Greased from head to toe, Zirganos dipped into the stormy waters off Howland’s Landing at approximately 8:30 P.M. Sunday. Four boats accompanied the veteran swimmer as he battled huge ground swells and choppy waters. Several times during the night rain-drenched boats lost sight of the swimmer. Zirganos was only a mile from the mainland 12 hours after his start. Bucking a severe tide at that point, it wasn’t until five hours later that he came ashore on the rocks at Portuguese Bend…”