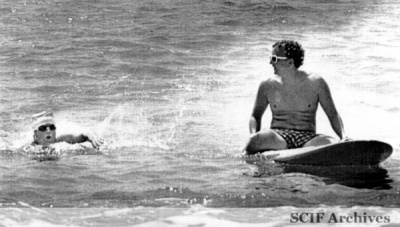 David Yudovin, first person to swim from Santa Cruz Island to California Coast in 15 hours, 11 minutes. Accompanied by John York on a surfboard.

August 23, 1926 [LAT]: “Swimmer fails in attempt at Santa Barbara Channel. An attempt to swim the twenty-two mile channel between Santa Cruz Island and the Santa Barbara mainland failed early today when Zane Steenrod, well-known in Atlantic Coast aquatic circles, left the water after swimming for five hours. Steenrod, escorted by the launch Sea Wolf, started his swim at midnight from Point Diablo, expecting to finish the distance to the mainland in from sixteen to eighteen hours.”

July 18, 1929 [SBMP]: “Paul Swenson, long distance swimmer from New Jersey, will attempt Monday, August 12, to swim from the foot of Chapala Street to Santa Cruz Island, a distance of 30 miles. Swenson says he is confident of his ability to negotiate the swim without serious difficulty. Several months ago Swenson swam across Lake Ontario, a distance of 21 miles, the water being icy cold at that time. He is now training for the Santa Barbara attempt and says he will start his 30 mile journey between 4 and 5 o’clock in the morning. Swenson figures that he will require about 12 and ½ hours to complete the swim.”

July 5, 1956 [DMN]: “Oxnard. High winds, rough seas and widespread seasickness among those accompanying him by boat forced Roy Sutter, 41, to abandon his attempt to swim the Santa Barbara channel Wednesday. The husky aircraft worker had been in the water only two hours on the projected 23-mile swim from Santa Cruz Island to Port Hueneme when he gave up at 1:06 A.M.”

August 19, 1984 [SBNP]: “A couple hours before he set foot on Hope Ranch Beach, 67-year-old Ashby Harper wondered if he would be able to finish the last few miles of his swim across the Santa Barbara Channel. But his persistence won out over his doubts and when he stepped ashore at 6:45 P.M. Saturday, Harper became the first person ever to swim the full width of the channel from Santa Cruz Island to Santa Barbara...”

September 8, 2006 [SBNP]: “An English marathon swimmer has become the first person in more than two decades—and the third person ever—to swim across the Santa Barbara Channel to Santa Cruz Island. Paul Lewis, 45, began the 26-mile journey Thursday morning at 1:20 A.M., before the choppy afternoon waves kicked in, and finished after 13 hours and 16 minutes of straight swimming… The last solo swim across the channel was undertaken on August 18, 1984.”

July 12, 2007 [SB Daily Sound]: “A mere two hundred meters from the shore, Rendy Lynn Opdycke hit a mess of seaweed. She had just swum 26 miles and all she wanted to do was get to dry land and take a nap. 'It was like a carpet of kelp,' she said. 'I wasn't swimming. I was crawling. I started to laugh.' Opdycke eventually made it to Thousand Step Beach in Santa Barbara last Saturday, becoming the fastest documented solo swimmer and the first woman to cross from Santa Cruz Island to the mainland. Her time in the water? A speedy 10 hours and 51 minutes, about an hour and a half faster than England's Paul Lewis, who made the solo journey in September 2006. 'To the best of our knowledge, she has been the fastest,' Emilio Casanueva, president and founder of the Santa Barbara Channel Swimming Association, told the Daily Sound. Casanueva observed the swim and his organization, founded in 2006, officially sanctioned the record, which Opdycke said will also make the International Marathon Swimming Hall of Fame...”

August 12, 2007 [PC]: “Kathleen Wilson, a Charleston City Council member and principal harpist for the Charleston Symphony Orchestra, on Saturday finished the 20-mile Santa Barbara (Calif.) Channel swim in 11 hours and 40 minutes. Sounding exhausted Saturday evening, the 44-year-old endurance swimmer described the marathon swim—from Santa Cruz Island to the beat at Ventura Harbor—as the second toughest of eight that she has completed since 1997. The hardest was the English Channel in 1997… Wilson said she battled nausea from the four-hour boat ride to Santa Cruz Island. ‘I’m much better in the water than on top of it,’ she added.”

September 16, 2012 [Presidio Sports Online]: “Local open-water swimmer Evan Morrison shattered the record for a solo swim from Santa Cruz Island to the mainland in Oxnard on Saturday. Morrison covered the 19 miles from the island’s San Pedro Point to Oxnard’s Hollywood Beach in 9 hours, 47 minutes, 49 seconds. The previous record was 10:27. “Honestly, the record was the furthest thing from my mind,” Morrison admitted on Sunday. “At times, it took all the effort I could muster to just put one arm in front of the other. I’m still not sure how I made it across. Just standing on dry sand at the end seemed more important than any records.” Morrison, a graduate of Dos Pueblos High and Princeton University, jumped into the water at around 12:45 a.m. and finished around 10:30. He becomes the ninth person to complete the swim.”