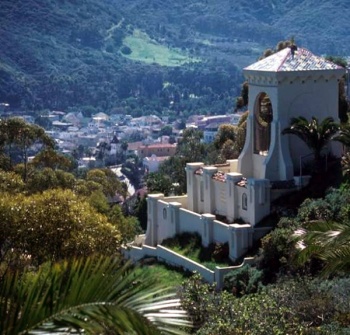 Chimes Tower, Santa Catalina Island was built under the direction of island-owner, William Wrigley, Jr. In 1925, he and his wife Ada Elizabeth Wrigley purchased the Westminster chimes from Chicago’s J.C. Deagan Company. Soon there after, they had the distinctive Spanish-style tower built as the permanent home for the chimes. It was Mrs. Wrigley’s hope that the unique sound of the melodic chimes would waft across the town for years to come, bringing joy to all who visited Avalon and adding another bit of character to the magical island that had captivated the Wrigleys when they arrived six years earlier as the island’s new majority owners. The chimes operate on a timer mechanism. They originally rang out every fifteen minutes from 7am to 10pm. Today they sound from 8am to 8pm and are often taken off the timer when islander, Jani Eisenhut, steps into the tower to play special tunes for Christmas, Easter and other events. Sometimes Jani plays for no reason other than for the sheer fun of it. While the chimes remain in good working order, the tower they call home is beginning to show its age, despite numerous efforts to maintain it. In May of 2013, the Rusack Family and the Catalina Island Company management began setting up a charitable foundation dedicated to restoring, maintaining and operating this beloved landmark for future generations to enjoy. Catalina Chimes Tower Foundation was established and granted both the Deagan Westminster chimes and a perpetual easement over the land. The Catalina Chimes Tower Foundation is now responsible for managing the foundation. Only half of the 440 chimes ever produced by the Deagan Company are still in operation today.

March 11, 2015 [ecatalina.com]: “AVALON, CATALINA ISLAND - One of the most charming features of Avalon is the iconic and beautifully designed Chimes Tower. Wanting to do something special for the community, Ada Elizabeth Wrigley, wife of William Wrigley Jr., purchased the Deagan Westminster chimes and, in December 1925, had a tower built to house them. It was her hope that the unique and melodic chimes would sound across the town for years to come, bringing enjoyment to all who came to Avalon and adding another bit of "character" to the magical island that had captivated her family. Since 1925, the town has awakened to the delightful sound of the bells, originally beginning at 7:00 AM and continuing until 10:00 PM. Currently they ring from 8:00 AM to 8:00 PM. Although the chimes operate on a timer mechanism, this can be turned off, which is what is done when Islander Jani Eisenhut, steps into the tower to play special tunes for Christmas, Easter and other events. Occasionally, Jani plays just for the sheer love of it. The chimes, made by the J. C. Deagan Company of Chicago, are in good order and continue to ring on a daily basis; however the tower surrounding them has greatly deteriorated due to its advanced age, despite various efforts to maintain it. Since May of 2013, Geoff and Alison Wrigley Rusack, as well as the management of the Santa Catalina Island Company, have been working to set up a charitable entity, under 501(c)(3) of the Internal Revenue Code, to restore this beloved landmark, operate it, and keep it maintained for future generations to enjoy. The establishment of the “Catalina Chimes Tower Foundation,” the granting of a perpetual easement over the land, and the donation of the historic structure and Deagan Westminster chimes have now been approved by the Island Company’s Board of Directors. Geoff and Alison have agreed to match any contributions made to the Foundation up to $100,000.00 in order to help kick off the renovation. The Catalina Chimes Tower Foundation Board has also been set up, and is responsible for the management and operation of the entity. Comprising the Board are Charlie Canby, Lourdes Thoricht, Blanny Hagenah, Geoff Rusack, Alison Wrigley Rusack, Packy Offield, Randy Herrel and Catherine Stephens. We all look forward to seeing the Chimes Tower come back to its original glory. For those who would like to help, tax deductible contributions may be sent to The Catalina Chimes Tower Foundation at P.O. Box 677, Avalon, CA 90704. For questions and comments please email info@catalinachimes.org. By Gina Long”

July 16, 2015 [Avalon Bay News]: “The Board of Directors of the Catalina Chimes Tower Foundation is pleased to report that the organization has been officially approved for tax exempt status under section 501(c)3 of the Internal Revenue Code. The chimes, made by the J. C. Deagan Company in Chicago, are in good order and continue to ring on a daily basis; however the tower surrounding them has greatly deteriorated due to its advanced age. The Board is committed to restoring this beloved landmark, operating it, and keeping it maintained for future generations to enjoy! Thanks to all who have generously supported this effort. Alison Wrigley and Geoffrey Claflin Rusack have agreed to contribute a matching gift on the first $100,000 of contributions in order to help kick off the renovation. For those who would also like to help, tax deductible contributions may be sent to the Catalina Chimes Tower Foundation at P.O. Box 677, Avalon, CA 90704. For questions and comments please email info@catalinachimes.org.”

April 29, 2016 [TI/Avalon]: “Structural engineer Tim Canby recently examined Avalon’s iconic Chimes Tower, and declared it to be solidly in place and structurally sound. The newly-formed board of the Catalina Chimes Tower Foundation had feared the worst for this 1925 city treasure. They, like so many who pass by the chimes, could only see decaying wood, cracking plaster and sliding walls, and were concerned that the building would have to be torn down and rebuilt. On a site visit, though, the engineer showed them that the main structure supporting and protecting the Deagan chimes is resting on a solid concrete pad, with no threat of collapse or sliding. The 90 year old Tower has clearly experienced some deterioration, but most of it appears to be cosmetic, rather than structural. Now, having met several times, the Chimes Tower Foundation board has a better grasp on how to go about addressing one of its key goals-- restoring and beautifying this unique building. In 2013 the board of the Santa Catalina Island Company began to look at how best to care for the tower. Recognizing that it was not only cherished by many but, also, that individuals, corporations and more wanted to help with its care and restoration, they decided to create a non-profit foundation and deed the chimes to it. While the process took longer than was expected, in 2015 the Catalina Chimes Tower Foundation was formed, had its first meeting and took ownership of the building. Also, in 2015 the Foundation obtained its tax exempt status, and the Board hired local accountant, Christy Lins, to handle financial matters. Since then, the CCTF has received many gifts from local residents as well as visitors from overtown. In addition, two mainland-based law firms and an architect are donating their services, and the Avalon Rotary and Lions Clubs have offered to help with the physical cleanup of the site. At its recent annual meeting, the Foundation named officers and appointed two new board members, Jani Eisenhut and Gina Long. According to Board Chair Alison Wrigley Rusack,

“Jani and Gina embody the spirit of the community and bring expertise, a wealth of history and energy to the table! We are very fortunate to have them by our side as we embark on restoring and maintaining the beloved Chimes Tower for future generations to enjoy.”

Rusack also said that she and her fellow board members are thrilled that, “without our even having put together the Foundation’s marketing/development plans, so many have opened their wallets and offered their time to this project,” adding, “I just want to say thanks to all of you who have helped get our organization off the ground!” Going forward, Rusack stated that the Foundation’s board is working on cleanup plans, timelines, goals, landscaping, security, a web page, cost estimating, insurance, donor recognition and more. She said that she and her fellow board members can hardly wait to get the renovations started, but they want to ensure that they do it the right way. Tax deductible contributions may be sent to the Catalina Chimes Tower Foundation at P.O. Box 677, Avalon, CA 90704. For questions and comments please e-mail info@catalinachimes.org. The Catalina Chimes Tower Foundation is a nonprofit public benefit corporation. The Foundation’s mission is to restore and maintain the Chimes Tower, an Avalon historic landmark on Catalina Island, for the community and future generations to enjoy.”