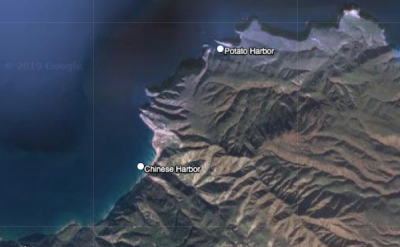 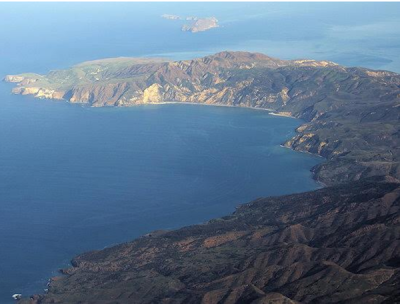 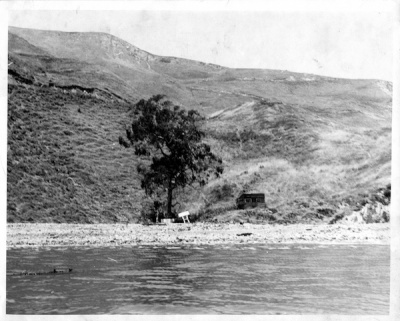 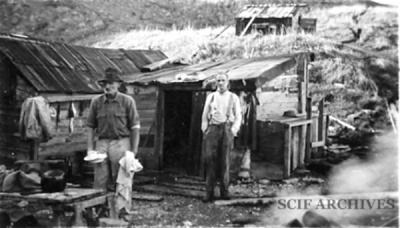 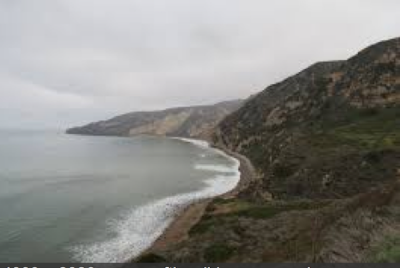 June 21, 1897 [SBDN]: “William Bates’ pride goes ashore on Santa Cruz Island. News was received here this morning of the loss of the Chappo, a yacht recently constructed by W. Bates, in Chinese Harbor, during the windstorm of Monday, a week ago. It seems the yacht was sailed into the harbor and that the men aboard could not get her out. They then anchored her, rowing ashore in a small boat. During the storm of June 14 she dragged her anchor, going shore in the rocks, where it is reported she went to pieces. Besides William Bates there were on the yacht, George Culbertson, Mr. House and a man by the name of Alex.”

June 26, 1897 [Santa Maria TImes]: “The Chappo comes to grief on the rock-bound coast of Santa Cruz. Monday morning the crew of the Chappo, Mr. William Bates newly launched cat boat, reached the city on board the Santa Cruz Island craft, the Young America, after watching the destruction of their little craft on Tuesday of last week on the rocks of Potato or Chinese Harbor on Santa Cruz Island. The party sailed from Santa Barbara on the fifth of this month, and consisted of the owner and Messrs. George Culbertson, Alex. Thorsson and A. F. House. The Island was reached and various points of interest were visited, including Valdez and Ladies' Harbor. Finally, after a pleasant cruise, Chinese Harbor was made. This is situated on the north side of the island, and open to the free sweep of the wind and force from the sea from the north-west. As the trip was undertaken largely or the purpose of testing the sailing qualities of the Chappo, she was put through her paces daily and changes made in her ballast. She had proven herself exceptionally able as a sea boat. The sloop Big Loafer, for this port with a party of seal hunters aboard, and six seals as a result of their labors, also put into the harbor. Finally on Sunday morning, there were signs of a big blow, and the crew of the Big Loafer proved that there is not everything in a name by getting promptly to sea, although the sea rose so rapidly before the gale that they had all they could do to row their craft to a position where sail could be made. They were followed some half an hour later by the Chappo, but the additional force of wind in even this little time made the task impossible. The whole harbor was a mass of breaking waves, and getting two anchors out and the vessel in the best position possible, the crew set to work removing ballast, and then went ashore to their camp. The Chappo rode safely for a day and a night at anchor; but the storm increasing in violence on Tuesday morning her anchor chain and her cable parted and she drifted rapidly on the rocks, which made kindling wood of the shapely little craft in short order. Nothing was saved save the rigging and sails. The crew soon made their way to Prisoners Harbor and thence to the home station, returning home as related above. Chappo means chunky or 'sawed-off,' and her name was typical of the brief career of the second of our new fleet.

The Wrecking of National Importance. Deputy Collector C. M. Bell received Tuesday, the necessary papers blanks and instructions for an official report on the wrecking of the yacht Chappo at Santa Cruz Island. It seems that the boat was without a license and without permission and, had a revenue cutter happened along, Chappo wold have been liable for confiscation. When on a recent visit here, special collector Chas. J. W. Sjoberg gave permission for local crafts, including Chappo and La Olita to sail about the harbor but not to go away, until their masters had received the necessary license, which could not be given until the official number and name of each boat had been properly carved, the boats inspected and other legal requirements complied with. The blanks received require a full statement of the boat, when and where built, when registered; when, where and how wrecked and what she carried at the time, as regards cargo, passengers, crew, etc. Mr. Bell received orders from headquarters Tuesday to not allow Mr. Newton's boat, La Olita to leave port until she is duly registered, inspected and licensed. Mr. Bell has not heard from the coast inspectors, Messrs. Bowles and Phillips in regard to Captain Larco's request for the privilege of carrying forty passengers instead of twenty-five, including the crew on the Lizzie Belle W.

January 24, 1947 [San Pedro News-Pilot]: “Fisherman drops dead on seiner. Succumbing to a heart attack aboard the seiner Progress last night at Chinese Harbor, Santa Cruz Island, Peter Fiamengo whose address was given by the coast guard as 525 Twentieth St., today was taken to an Oxnard mortuary. A post-mortem was to be held this morning, said the navy, which announced the death. Andrew Tomicich, skipper of the Progress, at 11 p.m. last night radioed the coast guard that Fiamengo who was on deck suddenly dropped and that "he had no pulse and appeared to have no life." The coast guard advised the vessel to put into Port Hueneme where an ambulance met the seiner at 3 p.m. today.”

January 27, 1947 [San Pedro News-Pilot]: “Obituary. Rosary will be recited at 7:30 p.m. tomorrow at the 570 W. 5th St. mortuary for Peter Fiamengo, 53, of 529 Twentieth St., who died last Thursday aboard the fishboat Progress at Chinese Harbor, Santa Cruz Island. High mass will be sung at 9 a.m. Wednesday at Mary Star of the Sea church. Burial will be in Calvary cemetery. Pallbearers will be Paul, Pete, George and John Fiamengo and Paul and Pete Mardestich.”

February 20, 1957 [Valley Times]: “Resume hunt for valley fishing trio. Shortly after dawn today the Coast Guard launched a second-day search of the Santa Barbara Channel for a trio of Valley fishermen missing since their boat left Port Hueneme Saturday. Two ships and one airplane were used in the initial search yesterday morning in the vicinity of Chinese Harbor on Santa Cruz Island. Missing aboard the 21-foot cabin cruiser Cor-Ann are Harold M. Loucks, of 13071 Rincon Ave., Pacoima; Hugh A. Davis, 45, of 1530 Pass Ave., Burbank, and Charles E. Felix, 36, of 9304 Hayvenhurst Ave., Sepulveda. One Coast Guard spokesman said that the area being searched covers 8,000 square miles and extends from Point COnception to Point Dume near Malibu and out in the Santa Barbara Channel to include the three Channel Islands. Late yesterday a surface vessel searched the Painted Cave and the Cava [sic] Valdez on Santa Cruz Island near the Arch rocks...”

December 27, 1948 [News-Pilot]: “Coast Guard aids crippled ship. The coast guard today reported that the Visitor 1, a 110-foot converted sub-chaser, had been towed to Santa Barbara after it sought assistance because of a fouled propeller. The craft became disabled about four miles off Chinese Harbor, Santa Cruz Island. The operator was listed as Charles Wieghill, P.O. Box 506, Santa Barbara.”

February 3, 1983 [LAT]: “Fishermen off Santa Cruz Island pulled up a rare catch from the ocean floor — a 500-pound bomb from World War II. Coast Guard spokesman Lt. Noris Turner said the bomb was hauled aboard the 57-foot Karen Marie at Chinese Cove, on the northeast side of the island. An explosives team boarded the fishing boat to retrieve the bomb and take it to the Seabee base at Port Hueneme. Turner said the team indicated that the chances of the bomb exploding were remote.”