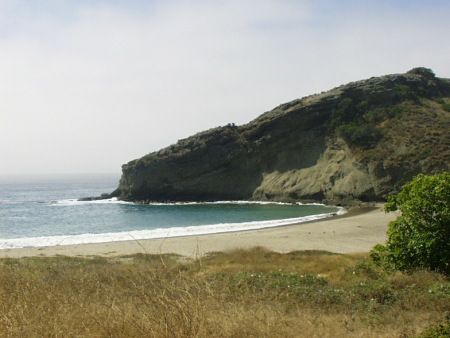 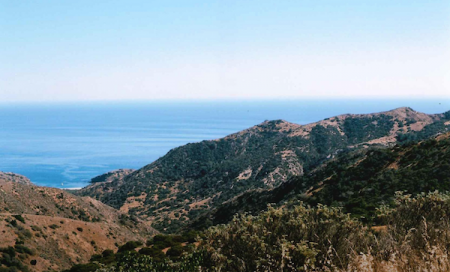 Coches Prietos, Santa Cruz Island (Cochie Prietos) [Sp. dark pigs] is the name of an anchorage, its canyon, and the road through it. It is located on the south side of the island to the west of Albert’s Anchorage. It first appears on Forney’s 1875 survey map of the island as Coche Prietos. The place name appears on the June 1882 U.S. Coast Survey map Pacific Coast from Santa Monica to Point Conception, including the Santa Barbara Channel, California, J.E. Hilgard, Superintendent.

This is one of the most popular anchorages on the entire southern shore due to its broad sandy beach. Two wooden shacks located here. This place name appears as Coches Prietos Anchorage on the Santa Cruz Island Sheet C topographic map. Kroeber gives the Indian name of this site as Nanawani. » Kroeber, A. L. Handbook of the Indians of California, 1925.

April 30, 1878 [SBDP]: “Santa Cruz Island. Researches of a French savant in the island. Lecture of Mons. L. de Cessac, yesterday, before the Santa Barbara Society of Natural History. Mons. de Cessac excused himself from addressing the society in English, he having been only a few months in America… The mission entrusted to him by the French government had principally for its aim the study of the volcanic phenomena and the anthropology of the western coast of North America. The island of Santa Cruz and the neighboring islands of the California archipelago were the first course in his field of investigation…His present purpose was simply to entertain the society with his researched in Santa Cruz Island. The savant opened with a rough sketch of the island, indicating the geological formations… the Tertiary period in which are found numerous beds of silex (flint) and veins of chalcedony, etc., going towards the west, on the northern coast, as far as the neighborhood of Prisoners’ Harbor, and on the southern coast to within three miles of Los Coches Prietos…”

August 18, 1904 [SBMP]: “The sheep shearing campaign is now in full blast and 69 vaqueros came into Scorpion Ranch with 4,000 head of sheep taken from the Cerritos at Coches Prietos. The shearing lasts for about four weeks, when upwards of 45,000 sheep are relieved of their superfluous clothing.”

September 4, 1917 [SCICo]: “On September 3rd we gave notice on Ramon Romo et al at Hazard; Rosaline Vasquez et al at Fry’s Harbor; and Frank Nidever at Orizaba. What is the next move? We will serve Willows, Coches Prietos and Blue Banks on September 4th and Middle Banks, Yellowbanks and San Pedro Point on the 5th.”

September 11, 1936 [OT]: “Fishboat sunk, Skipper hurt. Santa Barbara. September 11. The tuna clipper Columbus, of San Pedro, today rested at the bottom of Coches Harbor, Santa Cruz Island, a total loss following an explosion which seriously injured Captain George Olsen. The explosion was said to have resulted when a spark fell into a pool of gasoline which leaked from a broken feed line. Captain Olsen, who was attempting to fix the leak when the explosion occurred, received first and second degree burns. He was rescued from the water by the crew of the San Pedro swordfisher Angelo, and given emergency treatment on the island by Mrs. Hjalmar Englund, one of the few residents there. Captain Olsen, then was rushed to the mainland aboard the Angelo for hospital care. Surgeons here said he probably would recover.”