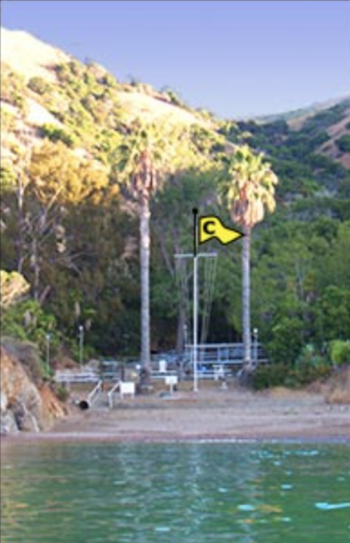 Then came the war years. Many Corsairs went into the armed forces. The Navy occupied the West Basin, and issued orders for the dismantling of the Corsair club house. Staff Commodore Bert Ashbridge, who was then Secretary-Treasurer, banked the club funds and closed the books for the duration of the war. Thus ended a chapter of Corsair Yacht Club activity.

The death of Bert Ashbridge in 1952 revealed the high regard he held for the Corsair Yacht Club. He bequeathed thousands of dollars for perpetual trophies, one for sail boaters and one for power boaters.

EMERALD BAY THE LAST FRONTIER….Until Memorial Day 1961, Emerald Bay was considered an open and very poor anchorage. Staying overnight was done occasionally, but only by the real salty sailor. Between World Way II and 1961 only four moorings were installed in the bay - for the Boy Scouts’ 65’ “MANTA”; John Wayne’s “NORWESTER”; Charly Lafferty’s “SPINSTER”; and Earl Sweinhart’s “HI-DE-HO”.

Until that Memorial Day, Corsair Yacht Club did not have a home at Catalina and held its cruises at various coves - the Isthmus, Big & Little Fisherman, Big & Little Geiger, White’s Cove and occasionally off Sandy Beach at Emerald Bay. In August 1960, Dr. Andy Anderson and Dick Sweinhart went up to Emerald Bay to show Dr. Anderson a gorge and beach that were directly off the stern of the “Hi-De-Ho” mooring. After crawling under barbed wire and into waist-high weeds and inspecting the wash thoroughly they could see possibilities in converting it into a Yacht Club Cove. All they needed was permission from the Island Co., an air compressor, three jack hammers, one bulldozer, 75’ of 24” culvert pipe, 150 concrete blocks and 20 sacks of cement….TO START!

The following winter the Corsair Yacht Club Board of Directors determined they would also need money, 75 strong backs, liability insurance and enough ladies willing to feed the construction crews for the next two summers. The Board of Directors knew the club had some hard workers, but were totally surprised when nearly all of the Corsair Yacht Club members came to the First Work Party on the 1961 Memorial Day Cruise. That was the start of Corsair Cove - with picks, shovels, various tools,

an air compressor and literally tons of construction material.

Construction began in earnest and has never ceased. The excavation and burial of the 24” drain pipe was completed in two weekends and ready for the bulldozer that did not arrive for several more weeks. By the 4th of July the real construction started. There was a separate crew for each project - the block wall, fire ring, barbecue pit, lockers and heads. The tables and flag pole came the following year and the septic tank in 1968. Corsair Yacht Club has some real sand hogs.

It wasn’t very long until the word was out and other yacht clubs wanted to use CORSAIR COVE. The Corsairs’ reputation grew, along with widespread recognition of the Corsair burgee. Corsair members proved Emerald Bay to be a beautiful, (even if not the calmest) mooring area. There are now nearly 100 moorings in the West Emerald area.

Today, one of the strongest Clubs on the Pacific Coast, the Corsairs have a very eventful calendar. It includes nine cruises to beautiful Catalina Island, sail boat races, fishing contests and the Commodore’s Ball.

The Corsair burgee is recognized in many ports of the world. Membership is limited to seventy-five. The membership is usually filled to capacity, with applicants waiting to join.