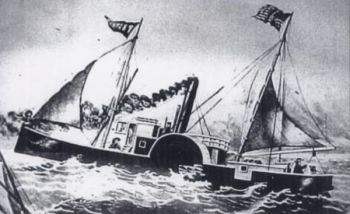 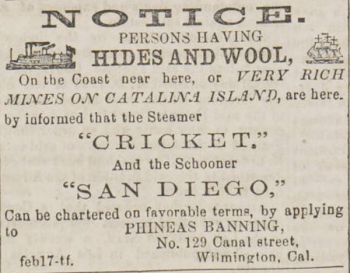 Cricket (# ) (1858-c. 1900), 100-foot shallow-draft wood-hulled steamer built in San Francisco and used primarily to shuttle passengers and cargo from deep water ocean ships through the shallow San Pedro Bay to the Banning wharf in Wilmington. In 1878 Cricket was refitted as a luxury fishing yacht, and purchased by Phineas Banning in 1883 to shuttle passengers to Santa Catalina Island in a trip that took about four hours. In 1884 the Banning family incorporated the Wilmington Transportation Company formed a number of years earlier. Cricket sank off San Pedro after the turn of the century.

March 19, 1864 [LAStar]:“Notice. Persons having hides and wool, on the coast near here, or very rich mines on Catalina Island, are hereby informed that the steamer Cricket and the schooner San Diego can be chartered on favorable terms by applying to Phineas Banning, No. 129 Canal Street, Wilmington, Cal.”

July 28, 1882 [LAT/SCat]: “Santa Ana, July 25. A trip replete with pleasure, incident and adventure… At 2:30 P.M. we boarded the Ida and, in tow of the tug Cricket, we squirm and twist along the crooked channel of Wilmington Creek to the inner bay at San Pedro. There we find business lively, five schooners discharging cargo at the new wharf, and twelve other vessels lying outside. The Ida unfurls her sails to the wind, casts loose from the Cricket, and under the impulse of a brisk breeze, goes skimming over the blue water… In due time Catalina was reached…”