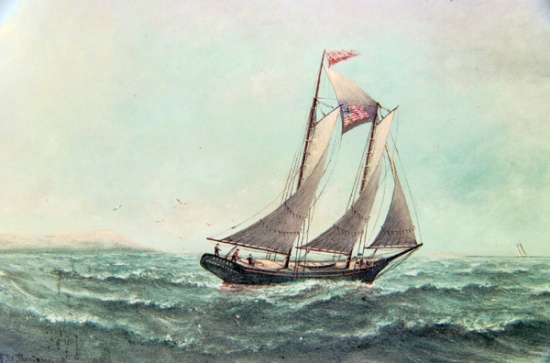 Cygnet (#5149) (+1869-1878), vessel of 28 tons that flourished around the California Channel Islands in the 1870s. Cygnet was operated by well-known seaman, Captain Martin Morse Kimberly. In 1873 as sea otters became more scarce around the Channel Islands, Kimberly traveled to the Sea of Okhotsk off Siberia and northern Japan for otters. Five years later, on his second trip to Japan in 1878, Kimberly’s ship was lost at sea with all on board in a typhoon off Japan.

Cygnet is listed in the Merchant Vessels of the United States between 1869 and 1878.

1872: “Captain Martin Morse Kimberly made a two-year voyage to the Asian coast in 1872 on the Cygnet. His objectives were two-fold: to salvage whale bones from ice-bound whaling vessels abandoned the previous winter in the Bering Sea, and to explore for sea otters and fur seals in the Sea of Japan. He found sea otters in the Kuril Islands and delivered 200 skins in Hakodate, Hokkaido receiving $80-$90 for each pelt. Other adventurers, hearing of Kimberly’s exploits from members of his crew, soon followed in seeking the valuable sea otter.” [Yesaki, Mitsuo. Sutebusuton: A Japanese Village on the British Columbia coast. 2003]

January 31, 1872 [SDU]: “Cygnet has been undergoing a thorough overhaul. Will sail for Santa Barbara in a few days.”

January 28, 1873 [DAC]: “A valuable discovery. A San Diego letter dated December 27th says: The schooner Cygnet, Kimberly, Master, forty-two tons register, went north last Spring into the Ochotisk Sea and loaded with oil. On her way back she got blown off and drifted among some islands north of Japan. Here she found so many sea otter that she threw overboard the cargo of oil and loaded with otter skins. This cargo she ran into Yokohama and sold for $25,000 and has gone back for another load. The Cygnetsailed from this port May 31, 1872, on a whaling voyage.

June 22, 1872 [SBT]: “Heard from. It will doubtless be a source of pleasure to many of our citizens to hear something of the whereabouts of Captain M. M. Kimberly and Z. T. Merritt, citizens of this place who are on a trading voyage to the north Pacific. They left San Francisco in the schooner Cygnet on the 3rd of May, during a heavy blow, and were driven to the Sandwich Islands, from which they started again on the 21st of May. We extract from a letter received from Captain Kimberly, Dated May 18th, giving an account of the trip:

‘We are now close to the port of Honolulu, and thinking you would like to hear of our whereabouts, I thought I would give you a sketch of our trip: We left San Francisco on the 3rd instant at 12 P.M., strong northwest wind; at 3 P.M. wind increased to a gale; hove the schooner to and continued hove to for forty hours; then kept off before the wind and ran down 300 miles southeast of Santa Barbara, when the wind moderated and we steered for the islands. Nothing worthy of note has occurred on the passage. Tomorrow we sail for the northwest part of the Pacific. Will write the first opportunity.’

From the Honolulu Commercial Advertiser we gather the following item of the Cygnet:

‘The schooner Cygnet, Captain Worth, which arrived on Sunday from San Francisco and sailed on the following day for Petropaulski, is on a trading and wrecking voyage to the Arctic Ocean, for which she goes well prepared.’”

November 23, 1875 [SBDN]: “Otter hunting. The schooner Cygnet will be occupied for some weeks in otter hunting in the vicinity of the outlying islands. This little vessel is just through with a fair sealing season in arctic waters. The summer in the northern sea is reported to have been unusually boisterous.”

January 11, 1876 [SBDN]: “The schooner Cygnet, Captain Kimberly, has returned from a cruise about the outlying islands for sea otter. Something more than a thousand dollars worth of furs were secured. She will go hence northward.”

November 3, 1876 [SBDP]: “The schooners Cygnet and Matinee were in the harbor this morning.”

November 9, 1876 [SBDP]: “The schooners Star of Freedom and Cygnet were at anchor in the offing this morning.”