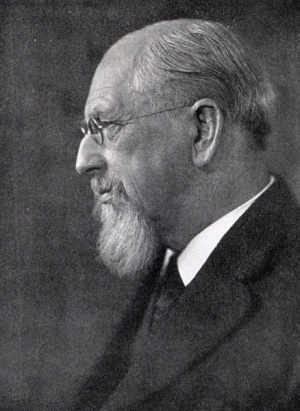 DALL, William Healey (1845-1927), Massachusetts-born paleontologist, malacologist and naturalist who studied zoology under Louis Agassiz. Dall collected and studied west coast mollusks from 1865 until his death in 1927. Through the influence of Spencer F. Baird, Dall worked for the U.S. Coast Survey (1871-1884); he was made honorary curator of mollusks in the U.S. National Museum; and in 1884 he accepted a transfer to the U.S. Geological Survey as paleontologist from 1884 to 1925.

In the winter of 1873 and 1874 Dall paid short visits to San Miguel and Santa Rosa islands where he collected shells and conducted brief archaeological explorations. In January 1874 he and Marcus Baker made a general natural history collecting visit to Santa Catalina Island, and plants collected are in the U.S. National Herbarium. A small number of artifacts he collected on Santa Catalina Island are in the Smithsonian.

May 10-November 10, 1876 the Centennial Exhibition, the first official World's Fair, was held in Philadelphia, PA. Dahl supplied the Smithsonian Institution with artifacts from the Chumash region for the Exhibition, as did Paul Schumacher and Stephen Bowers.

Dall described and named several mollusks and shells from the California Channel Islands. Dall sheep and Dall Bank are named for him.

[1876]: “Little attention was paid to this most valuable archaeological discovery [San Nicolas Island] until 1872 and 1873 when Mr. W. G. W. Harford, of the United States Coast Survey, happened on the islands of San Miguel and Santa Rosa, lying to the northward and westward of the islands before mentioned. From these islands this gentleman procured a small but exceedingly valuable collection of interesting objects, which came into the hands of Mr. William Dall, a most intelligent and enthusiastic collector, from which he deemed the locality of sufficient importance to visit it in person. This he did in the winter of 1873 and 1874. Mr. Dall visited San Miguel and Santa Catalina, but as his time was limited, no thorough examination was made of this mine of archaeological wealth lying then temptingly open to view. He, however, procured many interesting specimens…” [Wheeler, George. Annual Report upon the Geographical Surveys west of the one hundredth meridian, in California, Nevada, Utah, Colorado, Wyoming, New Mexico, Arizona, and Montana. Appendix JJ. Washington:GPO, 1876.]

July 23, 1882 [LAT]: “…Little attention, writes Assistant Surgeon H. C. Yarrow, was paid to these islands until 1873 when Mr. W. G. Harford, of the United States Coast Survey, happening to visit San Miguel and Santa Rosa, obtained a collection of interesting objects. This falling into the hands of Mr. W. H. Dall was deemed by him of such interest as to induce him to visit these islands in 1874…”