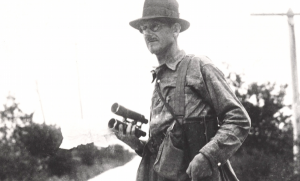 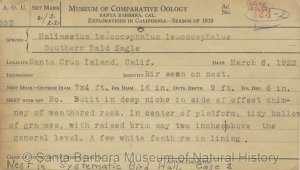 Dawson met his wife, Frances Etta Ackerman, when they both attended Oberlin College in Seattle, Washington. They married on May 1, 1895. In 1910, Dawson, his wife and two young sons, William Oberlin (1899-1959) and Giles Edward (1903-1994), moved to Santa Barbara, where their daughter, Barbara Dorothy was born in 1913. For 35 years Dawson was an unusually active and highly competitive egg collector, and he built one of the finest collections of bird eggs in the world.

On March 6, 1922 Dawson collected a set of bald eagle eggs on Santa Cruz Island [SBMNH]. His disagreements with the museum board and subsequent resignation from the Santa Barbara Museum of Natural History in 1923 opened opportunities for the museum’s expansion into other natural history fields besides eggs.

Dawson authored Birds of California in four volumes published in 1923. He drew upon photographic images taken by Donald Ryder Dickey in completing many of his illustrations.

Dawson died at age 55 in Columbus, Ohio on April 30, 1928. His ashes were spread at Crystal Lake in the Sierra Nevada. Copies of Dawson’s field notes can be found in the library holdings of the Western Foundation of Vertebrate Zoology in Camarillo, California.

DAWSON, William Leon. “Born in Leon, Iowa, February 20, 1873; died in Columbus, Ohio, April 30, 1928. Well known as the author of numerous publications on birds, and especially the “Birds of Ohio”, the “Birds of Washington”, and his great work the “Birds of California”. His contributions to ornithology have been commemorated by Grinnell who named the Sierra form of the Rosy Finch, Leucosticte t. dawsoni, in his honor.”

January 27, 1911 [LAT/LB]: “W. Leon Dawson, who is a guest of Clarence B. Linton and leaves for a trip to San Clemente and San Nicolas islands, is at work on a book which will sell at $750 a copy. It is a work on California ornithology and will require five years to complete. The edition deluxe will consist of fifty copies of which twenty-five have been subscribed for.”

March 20, 1915 [SCICo]: “U. Revel, Supt. Santa Cruz Island, Santa Barbara, Calif., Dear Sir: The bearer, Mr. W. Leon Dawson, is engaged in the study of birds of California and desires to spend a few weeks on Santa Cruz Island. Mr. Dawson desires to camp out at various places and we, therefore, grant him permission to pursue his studies on the island, as we have assurances that he will do everything in his power to avoid, in any way, injuring our property. Kindly extend to Mr. Dawson every courtesy in your power, and you will greatly oblige Yours very truly, The Santa Cruz Island Company, AJC.” 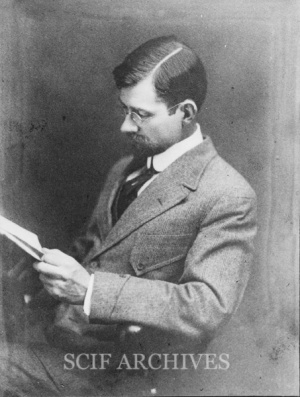 1915: “Through the courtesy of our distinguished fellow-member, Mr. Joseph Mailliard, and his friend, Mr. Arturo Caire, one of the present owners of Santa Cruz Island, I was permitted to spend nearly three weeks, viz. April 3rd to 22nd, with my son William, on this enchanted spot…” » Dawson, William Leon Supposed New Records for Santa Cruz Island in Condor 17:5 (203-204) September-October 1915.

August 23, 1916 [SBDN]: “The Museum of Comparative Oology, of which William Leon Dawson, local birdman is promoter, was open for the first time this summer this afternoon from two until six o’clock. It will be open the same hours Friday and Saturday. Mr. Dawson will be on hand to explain the exhibits which have been increased by about 2000 eggs during the last five months.”

August 30, 1916 [SBMP]: “Santa Cruz has jays found only there. Interesting fact revealed by oology study conducted by Mr. Dawson. One of the most curious facts brought to light by the field work carried out this past season by staff of the Museum of Comparative Oology is the effect of isolation upon the color of bird’s eggs. Isolation, that is, of the parent birds. Santa Cruz Island has a jay found upon that island only, and not even upon its neighbor, Santa Rosa. It is like the mainland type, or crestless blue jay… save that it is considerably larger and more deeply colored…” 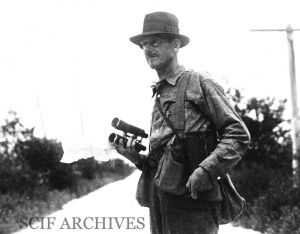 September 3, 1915 [SBMP]: “Protection of wildlife is a problem. William Leon Dawson discusses suggestion made for Channel Islands… William Leon Dawson, the ‘Bird Man’ of Santa Barbara who may be considered as competent authority on this matter can be found, writes as follows: …’Before we invoke the aid of so powerful a person as Uncle Sam, we must bethink ourselves of what his administration involves. Experience has proven him to be a very jealous, and somewhat unreasonable, as well as very efficient guardian of wild things… Something ought to be done, of course. But, are we ready to invoke the aid of this very powerful, yet no less clumsy giant, federal control? Prepare then to forego the pleasure of ever setting foot upon any island brought thus under federal jurisdiction, save by express permission and in company with a government warden…”

September 28, 1915 [SBMP]: “The federal government has already taken notice of the movement for the creation of a game reserve on the Santa Barbara Islands. This has come about through the activities of David Starr Jordan and Charles E. Davis… With Washington authorities taking such keen interest in the proposal, it is not improbably that something will come out of it… The views of Mr. W. Leon Dawson, the ‘Birdman,’ have already been expressed in The Press; and as they are now recalled, it seems the subject, like many others, may have two sides.”

March 17, 1916 [SBMP]: “Oologists go on expedition. Slipping away noiselessly into the fog yesterday morning, the steam schooner Santa Cruz carried two veteran oologists, who constitute the first expedition sent out by the new Museum of Comparative Oology... A. G. Vrooman of Santa Cruz city, who leads the expedition, is well known among oologists as the discoverer of the egg of the rare black swift. After a sojourn on Santa Cruz Island, he will return and accompany W. Leon Dawson on an extended itinerary lasting until August 1...”