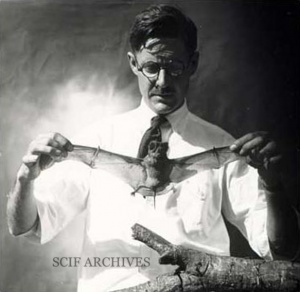 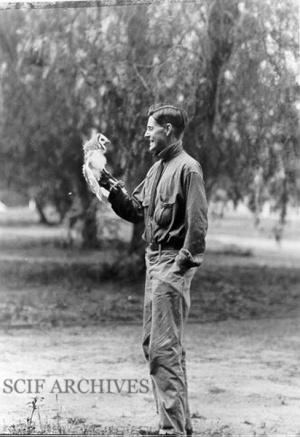 DICKEY, Donald Ryder “Dick” (1887-1932), a 1910 Yale graduate, well-known photographer, ornithologist and biologist of his time, whose goal was to establish a research center for vertebrate zoology in southern California, and to build up a study collection of specimens with photographs and books. After graduation, Dickey moved to southern California, taking two years to recuperate from heart-related ill health. With his strength regained, Dickey went on to conduct extensive field work in not only California, but also in Canada, the mid-Pacific, Mexico and Central America. Ornithologist William Leon Dawson drew upon many of Dickey’s images in compiling his Birds of California, published in 1923.

By 1926 Dickey had amassed a sizable library, a collection of 60,000 specimens of mammals and birds, and thousands of photographic images. That year the California Institute of Technology at Pasadena assigned space for work in vertebrate zoology where Dickey’s specimens and library were established. Mention of Dickey’s work appeared in popular periodicals, including Outing, Recreation, Country Life in America, and The National Geographic. The name Dickey (dickeyi) is perpetuated in the systematic nomenclature of American fauna in ten birds and mammals.

Dickey died in Pasadena at the age of 43. His widow, Florence Van Vechten Dickey donated the Donald R. Dickey Collection of Birds and Mammals to the University of California, Los Angeles where it is housed in the Biomedical Library History & Special Collections.

Dickey became a member of the Cooper Ornithological Club in 1910. He became a life member and he contributed to the Club's Endowment Fund.

DICKEY, Donald Ryder. “Born at Dubuque, Iowa, March 31, 1887. An active and prominent ornithologist and patron of science of Pasadena, who has brought together a large private collection of west coast mammals and birds. With A. J. Van Rossem, he has undertaken a comprehensive survey of the mammals and birds of Salvador. He is an expert photographer and has made some wonderful motion pictures of the big game of New Brunswick and of the birds of Laysan Island. In recognition of his work a gigantic fossil goose from the Pleistocene asphalt of McKittrick, California, has been named Branta dickeyi by L. H. Miller, a Reddish Egret from Lower California has been dedicated to him by Van Rossem under the name Dichromanassa rufescens dickeyi, and a race of Poor-will from Lower California has been called Phalaenoptilus nuttallii dickeyi, by Grinnell.”

Howland had lived on San Clemente Island for 15 years when A. B. Howell, Donald Dickey and L. Huey visited in 1915. (L. Kiff ‘Historical Changes in Raptor Populations’)