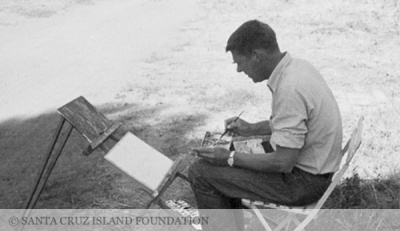 DIEBENKORN, Richard (1922-1993), Oregon-born painter who taught at the California School of Fine Arts (1947-1950). Diebenkorn helped to define Bay Area sensibility before and after his teaching years in Los Angeles. According to an article in the New Yorker, Diebenkorn was one of the last artists left who sustained the grand authority of American abstract painting of the fifties.

Diebenkorn met Carey Stanton (1923-1987), whose family owned Santa Cruz Island, when the two were freshmen at Stanford. Diebenkorn was already bent on the artistic life from the beginning, and Stanton entered the pre-med program at Stanford, determined to become a doctor. They became close friends during their undergraduate years together, and their friendship remained strong throughout their lifetimes. Stanton, who referred to him as “Witz”, was best man at Diebenkorn’s wedding to Phillis Gilman in Santa Barbara in 1943.

After getting his medical doctorate in 1947 and after nearly a decade of medical practice, Stanton moved to Santa Cruz Island to manage ranch operations. Over the next 30 years, Diebenkorn and his family made frequent island visits. Stanton began to acquire Diebenkorn's work, eventually accumulating 45 pieces. Many of the works were painted on Santa Cruz Island. The intimate but intense Diebenkorn works chart friendship between the artist and Carey Stanton.

After Carey Stanton's death in 1987, the collection of paintings became property of the Santa Cruz Island Foundation, which Stanton established in 1985 to preserve and document the culture of the Channel Islands.

Flag of Santa Cruz Island was designed by artist Richard Diebenkorn for Carey Stanton in 1958. It depicts the 19th century island symbol of a cross on a hill, flanked by green pastures and blue sky and ocean. It flies on the island, at the Santa Barbara breakwater, and at the office of the Santa Cruz Island Foundation. Santa Cruz Island is the only California Channel Island with its own flag.

May-June, 2015 [Stanford]: “Psychologist and Muse, Phyllis Diebenkorn was a partner in every way to American painter Richard Diebenkorn. His wife and muse, she helped catalog and organize the artist's work over the span of their 50-year marriage. Phillis Gilman Diebenkorn, ;42, died in her sleep at her San Francisco apartment on January 19. She was 93. A native of Southern California, she enrolled at Stanford in 1939. A year later, Phyllis met Richard, '44, and they married before he joined the Marine Corps. After World War II, they returned to the Bay Area, where Richard used the GI bill to study at the California School of Fine Arts (now the San Francisco Art Institute). Phyllis completed her undergraduate work at the University of New Mexico while her husband finished a master's degree in painting. In 1953, the Diebenkorns settled in Berkeley. Phyllis was accepted into the doctoral program in psychology at UC-Berkeley and worked at the Institute of Personality Assessment and Research. Gretchen Diebenkorn Grant, '67, MFA '69, said "While my mother was very involved in the lab at UC-Berkeley, my father made it clear that his focus was on his art, and my mother agreed to go with him wherever he went. Where he wanted to live, what he wanted to learn, even how each house was going to look — this was all decided by him. Yet they were a very loving couple. She kept meticulous track of all of his art and exhibitions; they made a fascinating, complicated team." The couple returned to Stanford in 1963, after Richard was invited to be artist-in-residence. Later they moved to Santa Monica, where he taught at UCLA, and then to Healdsburg, Calif. Their final move, in 1992, brought them back to Berkeley, where Richard died the following year. Phyllis continued to promote her husband's legacy, helping with museum retrospectives of his work and founding the Richard Diebenkorn Foundation in Berkeley in 2007. The foundation's main project is to build a complete catalog of the artist's paintings and works on paper from 1922 to 1993, a compilation it expects will include nearly 700 oil paintings and close to 4,000 works on paper. Last year, Phyllis donated 26 of her late husband's sketchbooks to the Cantor Arts Center at Stanford, a collection containing upwards of 1,200 drawings. According to Connie Wolf, '81, director of Cantor, "Not only was Phyllis Richard's model — she features prominently in many of his drawings — but she recognized the important role that Stanford played in both her and Richard's lives, the university's focus on art history and its importance as a place of interdisciplinary learning." A selection of Diebenkorn's sketchbooks will be part of Artists at Work, an exhibition scheduled to open this fall. Phyllis Diebenkorn is survived by her children, Gretchen and Christopher; two grandchildren and three great-grandchildren.”