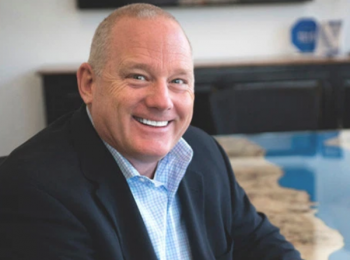 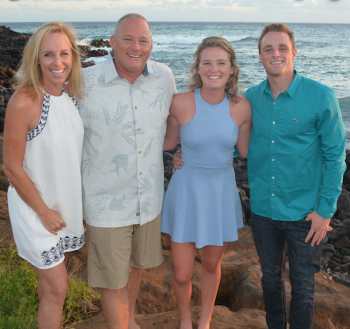 "With a broken heart, I will lead us vigilantly as we await confirmation from the authorities," wrote Big Fish Employer Services president Jeff Hill. "We are honoring Justin with our actions by continuing to run the business that he built with honor and commitment."

USA Water Polo CEO Christopher Ramsey released a statement saying Justin was a passionate longtime member of the water polo community since playing in college and they're heartbroken to hear of his passing.

Dignam was from Anaheim Hills, CA. He is survived by his wife, Christine, and children Taylor and Chandler. He was 58 years old.

FAMILY MAN: Justin met his wife, Christine, on a Nantucket Christmas stroll in 1987. Two years later they were married. The couple had planned to visit Nantucket this October to celebrate their 30th anniversary. Justin and Christine raised two wonderful children together, Taylor and Chandler, and he was a proud father. While Justin loved his hobbies, worked hard to build his business, and was a friend to so many, his family was always his top priority. Justin was so involved in the sports and activities of his kids, and was over the moon with them both graduating from University of Colorado Boulder. Justin was an incredibly committed father and mentor to his two children. They were his proudest achievement. Justin spent countless hours providing guidance and support to the children as they navigated high school and college academics, competitive sports and social life; and more recently, he advised them with their career decisions. Justin looked forward to the time in life when he and Christine could relax their roles as involved parents and enjoy their own time together watching their children live their lives as wonderful young adults.

HE LOVED WATER: Justin’s love for the water began at an early age. He and his friends would start their days in the water having fun, finish their days in the water having fun, and lifeguarding in between to make some money in the middle. He was a natural fish in the water, excelling at the backstroke and swimming his way into the University of Richmond on scholarship. It was at Richmond that Justin started playing water polo. It was a love that evolved into coaching at the college level and in more recent years, being involved with the USA Water Polo Association and competing at the Master level. It was Justin’s water polo coach at Richmond that certified him for his first scuba class. To date, Justin had completed around 700 dives. In addition to swimming and water polo, Justin loved his 500 gallon salt water tank in his office, his involvement with the Friends of the Sea Lions organization, and jumping in the ocean with his daughter Taylor whenever she’d visit from college, no matter how cold it was. He and his daughter shared a passion for diving, which led to exotic and beautiful vacation spots for the whole family. In fact, the family traveled the world sharing numerous memorable adventures, including The British Virgin Islands, Belize, Cayman Islands, Costa Rica and one of his favorite dive places, Cozumel.

ENTREPRENEUR: It was that adventurous spirit that had him starting "Big Fish Payroll Services" in 2003 from a room in the family home in Anaheim Hills and building it to the successful business of today that has become Big Fish Employer Services. He was committed and loyal, not only to the success of the business, but also to his employees and his family. He did it all beautifully and it took hard work. In his own life and at Big Fish, Justin believed in the importance of a work/life balance. To his children and his employees, Justin “walked the talk,” taking time from work for family time, friendship, travel, diving and volunteer work. In an era where a man’s word doesn’t always carry meaning, his word was his bond and this gave the people in his life confidence, security and love every single day. This was the culture he wanted for his team and it became the attitude and modus operandi for Big Fish Employer Services.

September 6, 2019 [mynewsla.com]: “Authorities Confirm Anaheim Man Died in Conception Boat Fire. Justin Carroll Dignam, 58, was positively identified by Santa Barbara County sheriff’s officials during a Friday morning news conference. Dignam was the founder and CEO of Big Fish Employer Services, a payroll management company. According to the Orange County Register, Big Fish Employer Services president Jeff Hill sent an email to the company’s clients on Tuesday informing them that Dignam was aboard the vessel when it caught fire and sank early Monday morning off the coast of Santa Barbara. “With a broken heart, I will lead us vigilantly as we await confirmation from the authorities,” Hill wrote in the email, according to the Register. That confirmation came Friday morning during a news conference in Santa Barbara. The Register reported that Dignam, a married father of two, was a veteran water polo player, having played at the University of Richmond and coached at Iona College and Wesleyan University. According to his biography on Big Fish website, Dignam worked for payroll company Automatic Data Processing for more than 17 years before starting his own company in 2003. “He is also active on the athletic playing field, having coached baseball, soccer and basketball in Anaheim Hills and Orange,” according to his biography. “Current hobbies include scuba diving and competing in masters water polo.” Only five people, all crew members, were able to escape the inferno that engulfed the dive boat Monday morning. Authorities said Friday morning the bodies of 33 of the 34 people who died have been recovered, but efforts were continuing to locate the remaining victim.”

November 11, 2019 [losangeles.cbslocal.com]: “Widow Sues Truth Aquatics Owner In Conception Boat Fire That Killed 34. LOS ANGELES (CBSLA/AP) — The widow of a man who died when a dive boat caught fire off the Santa Barbara coast leaving 34 people dead is suing the vessel’s owners. Christine Dignam, who lost her husband Justin Dignam, filed her claim Monday in Los Angeles federal court. The lawsuit against Santa Barbara-based Truth Aquatics is the first from a relative of those who died on the boat. The lawsuit is a counterclaim to a lawsuit filed pre-emptively by owners of the boat, called the Conception, to protect them from liability under a quirk of maritime law. Three days after the boat burned and sank into the Pacific, the vessel’s owner filed a lawsuit in federal court asking for help blocking victims’ families from filing lawsuits and limiting how much can be paid out. The fire is the subject of ongoing criminal and safety inquiries by federal authorities. On Sept. 27, investigators had finished examining the dive boat but so far have found no cause for the fire. A two-week examination of the Conception ended without a conclusive cause, an official with knowledge of the investigation told the Associated Press. At 3:15 a.m. on Sept. 2, the U.S. Coast Guard and Ventura County Fire Department crews rushed to a mayday call that the “Conception” — a 75-foot-long charter dive boat carrying 39 people — was ablaze 20 yards off Platts Harbor on the north side of Santa Cruz Island, located about 30 miles west of the city of Ventura. Those aboard included six crew members and 33 passengers. Five crew members, including the captain, were above deck and jumped off the burning Conception. They somehow made it into a dingy and paddled to safety, where they were rescued by a nearby good Samaritan’s boat called the “Grape Escape.” The passengers, meanwhile, were all below deck at the time. Lawyers for the boat company did not immediately respond to emails seeking comment on the lawsuit.”

November 12, 2019 [ ]: “Widow sues boat owner in fire off Santa Cruz Island that killed 34. LOS ANGELES (AP) — The widow of a man who died in a fiery dive boat disaster that killed 34 people in waters off California is suing the vessel's owners. Christine Dignam, who lost her husband Justin Dignam, filed her claim Monday in Los Angeles federal court. The lawsuit against Santa Barbara-based Truth Aquatics is the first from a relative of those who died on the boat. The lawsuit is a counterclaim to a lawsuit filed pre-emptively by owners of the boat, called the Conception, to protect them from liability under a quirk of maritime law. The fire is the subject of ongoing criminal and safety inquiries by federal authorities. The blaze's cause has not been determined. Lawyers for the boat company did not immediately respond to emails seeking comment on the lawsuit.”