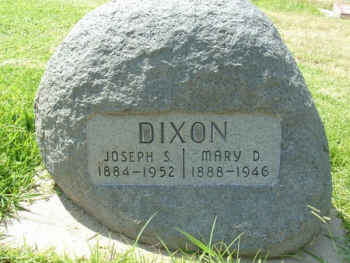 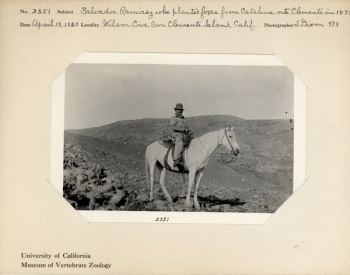 DIXON, Joseph Scattergood (1884-1952), Kansas-born ornithologist hired as a field collector by Joseph Grinnell in 1908. In 1915 Dixon became Assistant Curator of Mammals at the Museum of Vertebrate Zoology. From 1920-1931 he held the post of Economic Mammalogist in the Museum until he left to work for the National Park Service. Dixon collected on Santa Catalina Island April 6-12, 1920, and on San Clemente Island April 12-17, 1920. One of his most significant notations is that of information he recorded in an interview with Salvador Ramirez, who relocated Santa Catalina Island foxes to San Clemente Island in 1875, and who also placed goats on that island the same year:

“Salvador Ramirez, a Spaniard of the old school who came to San Clemente in 1875 as a young man to tend sheep and who has lived for the most part on the island since then gave me the following information regarding foxes on Clemente: There were no foxes on the island (Clemente) previous to this time (1875), so being naturally interested in birds and animals, he asked and received permission from his employers on Catalina Island, to catch and bring over some foxes and goats. One pair (male & Female) were caught, brought over and turned loose near Wilson Cove and from this pair have sprung the entire present population of foxes on Clemente. Ramirez says that the foxes varied in color somewhat on Catalina, that some were brighter (redder) than others and that he picked good ones hence the bright foxes on Clemente.”

Dixon’s field notes are on file at the Museum of Vertebrate Zoology, Berkeley. Dixon died in San Diego on June 23, 1952 at age 68. He is buried in Oak Hill Memorial Park, Escondido, CA.

DIXON, Joseph Scattergood “Born at Baxter Springs, Cherokee County, Kansas, March 5, 1884. A member of the American Ornithologists' Union and Cooper Ornithological Club, who has published a number of papers on the mammals and birds of the west coast. He is a remarkable careful observer, has made many important observations on the life histories of various species, and has recently discovered the nest and eggs of the Surf-bird in Alaska. In recognition of his work, W. S. Brooks has named the west coast White-winger Scoter, Melanitta f. dixoni, in his honor. This bird is common on the coast of California but is not generally considered distinct from the typical form.”