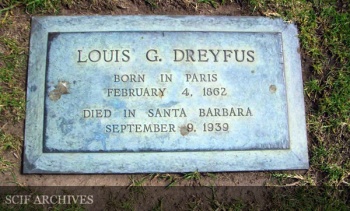 Dreyfus was a collector of Indian artifacts who participated in an archaeological investigation on San Miguel Island. According to historian Francis R. Holland, subsequent to Paul Schumacher's island work, and prior to 1919, there were excavations on San Miguel Island by Stephen Bowers, E. L. Doran and Louis G. Dreyfus. Dreyfus hired ‘Chico’ Leyva, from an old Santa Barbara Californio family, to excavate for him.

Dreyfus died in Santa Barbara at age 77 on September 9, 1939, and is buried in Santa Barbara Cemetery. He was survived by his wife, namesake son, and daughters Isadora [Mrs. Oliver Parsons of Carpinteria] and Constance [Mrs. W. H. Lazear of Sacramento].

March 1, 1892 [SBDI]: “A portion of the Santa Cruz Island Company’s land, consisting of a strip of 100 x 300 feet, situated on the beach on the site of the proposed boulevard was appraised by a committee consisting of J. E. Goux, Louis Dreyfus, Judge Crane, Harry Stoddard and W. E. Noble, yesterday afternoon. Two of the committee were chosen by the city, two by the Santa Cruz Island Company and one at large. The committee decided upon $600 as the land’s value.”

April 30, 1895 [SBDI]: “The schooner Santa Cruz sailed this morning for Santa Cruz Island, having on board Mrs. Caire and the family of Louis G. Dreyfus.”

May 19, 1895 [LAT/SB]: “Louis Dreyfus and family returned today (Saturday) from a trip to Santa Cruz Island, where they have been sojourning for the past two weeks.”

June 29, 1898 [LAT/SB]: “Frank Anduagua has been sentenced by Judge Gammill to a hundred days in jail for stealing a valuable Indian relic from Louis G. Dreyfus.”

September 10, 1939 [SBMP]: “Louis G. Dreyfus, one of Santa Barbara’s best known pioneers, and prominent local realtor, died yesterday at his home, 221 Constance Avenue. Death came as the aging businessman slept. He was 77 years old. Born in Paris in 1861 [1862?], Mr. Dreyfus came to American with his family 10 years later. He attended Charlier Institute in New York, continuing on to Columbia University. In 1886 he came to Santa Barbara, to assist his father in the operation of a business started two years before…”