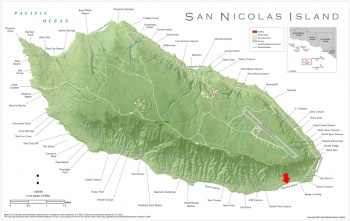 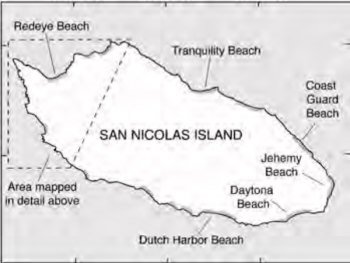 Datona Beach is located on the southeast end of the island.

Sept 2002: it was announced that the contract for a new pier at San Nicolas Island had been awarded to Nova Group, Inc for $11,500,000. Currently, barges that bring supplies to the island are landed on the beach and are routinely delayed due to weather and sea conditions. The barge delays cause vital military testing and training on the NAVAIR Weapons Division Sea Range to slip. The new pier will significantly reduce the delays and impacts on the growing population of seals and sea lions that breed and pup in the area. Contract Number N68711-02-C-2004 was awarded by the Southwest Division, Naval Facilities Engineering Command, San Diego, with assistance from the NAVAIR Weapons Division, and the Naval Facilities Engineering Service Center. The contract includes the design and construction of a 460 foot long pier including mooring systems and a ramp to facilitate offloading the barges. A new operations building, and transit shed for cargo are also included. The pier will be built on the southeast end of the island in an area called Daytona Beach. Design is underway, with construction expected to be complete in Spring 2004. Once the pier is completed, barges will be able to pull up to a horizontal, mechanical ramp that will lower from deck elevation to water level for roll-on roll-off cargo transfer. As of September 22, 2004, construction was under way on the world’s first open-ocean, roll-on roll-off pier off the California coast. The $12 million construction project on Naval Outlying Landing Field San Nicolas Island is meant to enable the Navy to safely offload equipment and supplies for use by the island’s Navy and civilian population. Prior to the pier's construction, supplies were brought aboard the island by being offloaded right on the beach, using an old pontoon system where the barge had to be beached on the shore. One drawback with that method was the small window available resulting from the tides to safely onload and offload trucks and equipment from the barge. The contractor for the project, Nova Group of Napa, Calif., precast more than 80 percent of the concrete for the pier and dolphin structures, including pile caps, planks, piles, and pile caps for dolphins. The pier and dolphin structures are approximately 640 feet long, with a deck elevation that varies from 10 feet to 29 feet.”

2005 [VCStar~The Lighthouse]: “On April 25, about 50 military and civilian personnel from Point Mugu, China Lake and the local community attended a ribbon-cutting for a new pier on San Nicolas Island. Public Affairs officers from Naval Base Ventura County were on hand to document the event. Their story appeared in the May 5, 2005, edition of The Lighthouse. The $11.5 million, one-of-a-kind pier allowed cargo — vehicles, trailers and heavy construction equipment — to roll on or off a supply barge. It was expected to reduce the unloading time by more than an hour, as barges would no longer have to run aground on the beach, an inefficient and dangerous operation that was frequently delayed because of weather, surf conditions and marine mammals. In some cases, such delays lasted as long as six weeks. Located in the Daytona Beach area on the southwest end of the island, the 460-foot pier had mooring systems, a ramp for offloading the barges, lighting, a staging and parking area and a transit shed for the temporary storing of cargo. “This has been a long day coming” U.S. Rep. Elton Gallegly said during the ceremony. “It has taken more than a decade to plan, finance and build this pier.”