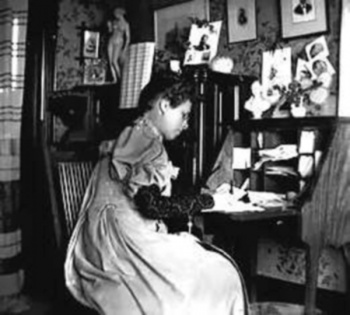 In December 1892 when Ninetta was 40 years old, an article she wrote about San Nicolas Island ~ Three Weeks on a Weird Island, was published in Popular Monthly: XXXIV(6-42):657-671. She visited the island aboard the schooner Hattie, run by Captain Conlan and a crew of two others. In the party visiting the island were five people plus three crew:

Professor Borland, “an authority on geology and archaeology”, had been hired by the California State Mining Bureau “to make a report of this island”. During the voyage, Ninetta's uncle, Edward Bruner, recounted his visit to see the Lone Woman of San Nicolas Island in Santa Barbara with his father in 1853 when he was a young boy.

Ninetta became an editor and author, and for a time a follower of Charles Keeler's “Cosmic Religion”. She married her first husband, Roscoe Lorenzo Eames (1846-1931), and together they raised Ninetta's niece, Charmain Kitteredge, after the child's mother died in 1877. During the 1890s, Ninetta and Roscoe Eames became editors of the Overland Monthly, where Charmian helped out in her spare time by writing reviews and articles. She met author, Jack London, during his visit to the editors, and they became casual friends. In 1905 Charmain Kittredge married Jack London.

On November 10, 1910 Ninetta, divorced from Eames, married her second husband, Vermont-born Rev. Edward Biron Payne (1847-1923). Jack and Charmain London attended the wedding. Payne was a Unitarian minister. In 1894, he and thirty of his followers had founded Altruria, a short-lived Utopian community in Sonoma County, California. The group published the magazine the Altrurian, which informed its supporters of the colony and sought to promote its ideals and the formation of Altrurian clubs. Several such clubs were created in the San Francisco and Los Angeles areas. In 1923, Ninetta became a widow.

Three Weeks on a Weird Island

1937 “Pioneer literary woman, 84, to wed engineer, age 72. Mrs. Ninetta Eames Payne, 84-year-old widow, and Fred Foster Springer, 72-year-old retired telephone company engineer, will spend the next two weeks honeymooning at Shasta Springs. That was learned today after the couple had filed intentions to wed in Eureka. Relatives of Mrs. Payne in Berkeley said that they left here to be married in Northern California and to spend their two-weeks' honeymoon at the watering place. She is the widow of the late Rev. Payne, writer on the subject of communication between worlds, who wrote a book on the soul of Jack London before he died several years ago. Her niece, Charmian London, is the widow of the famous Oakland writer. Mrs. Payne, who formerly edited the magazine, Overland Monthly, is one of the pioneer literary figures of California. Springer, the father of four grown children, has been a friend of Mrs. Payne and her family for many years. After the honeymoon, the couple will make their home at Mrs. Payne's, 1282 Oxford Street, Berkeley.”