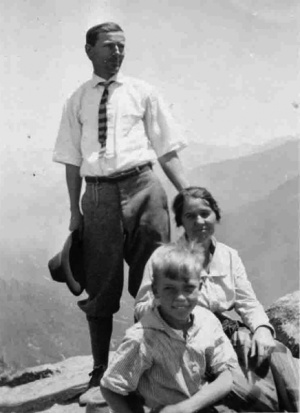 EDWARDS, Howard Ardenlex (1884-1953), Indiana-born man who became self-taught in many activities, including stunts as a professional daredevil in his youth, teacher, artist, and eventually egg collector, anthropological collector and pothunter. In 1910, Howard Edwards and is wife, Rose, moved to Eagle Rock in northeastern Los Angeles, the year before it became in incorporated city. They then staked a homestead claim on land in the desert area in the Antelope Valley, California, where they built a Swiss chalet-type home. In the 1930s, the Edwards’ staged annual pageants portraying concepts of early California Indian life. The Edwards and Lester families were friends in the 1930s when the Lesters lived on San Miguel Island, and Elizabeth Lester and her children stayed with Howard and Rose Edwards. Edwards died on July 19, 1953 at age 68. His unique desert house is now home to the Antelope Valley Indian Museum State Historic Park, owned by the State of California since 1979, and open to the public since 1982. Copies of his field notes can be found in the library holdings of the Western Foundation of Vertebrate Zoology in Camarillo, California.