EHLEN, Peter (1933-2015), structural engineer and watercolorist who is among the first artists known to have painted on Santa Rosa Island. March 22-24, 1996 the Santa Cruz Island Foundation sponsored a trip the the Vail & Vickers Ranch on Santa Rosa Island where artists Peter Ehlen, Ed Lenvik, Bill Mahan and Fred Sweeney painted island scenes. Architect Dave Jones accompanied their trip. Each artist donated one work to the Santa Cruz Island Foundation in exchange for sponsoring the trip, including flights to the island from Camarillo. 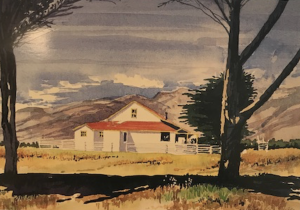 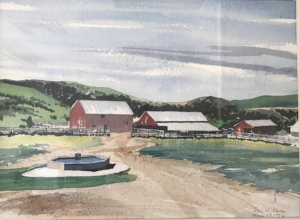 October 15, 2015 [SB Independent]: “ Peter W. Ehlen. Peter W. Ehlen, beloved husband, father, respected Santa Barbara Structural Engineer and esteemed watercolor artist, passed away peacefully on October 1, 2015 with his wife Jean Clarke Ehlen and immediate family at his bedside. Peter had been courageously navigating his gradual decline from Parkinson's Disease with Lewy Body Dementia. During his illness he never complained and was always smiling and thankful. Peter was the only child born to John Henry Ehlen and Paula Weller Ehlen in Pasadena on Jan. 5, 1933. He grew up in Pasadena but made many trips over the summer months to the midwest to visit cousins and the legendary Ehlen and Grote mercantile store started by his Grandfather. During his youth, Peter was a member of the Pasadena Boy's Choir and was chosen from 200 boys for a 20-boy choir that sang with the San Francisco Grand Opera Company in a production of "Boris Godounoff" in the Shrine Auditorium in Los Angeles. He also sang "La Boheme" and "Carmen" at the age of 12. He was in school leadership and lettered in football and track in both Jr. High and High School. He envisioned starting his college career in Architecture at UC Berkeley but changed course to major in Civil Engineering when given the opportunity to attend Stanford University. Graduating from Stanford in 1955 in Civil Engineering, Peter then spent two years in Anchorage, Alaska as a private in the Army and was newly wed. After his service he and his wife moved to Santa Barbara and started a family. He was blessed with three children, Pete, Mark and ALison. Peter leaves a strong structural engineering legacy in the City of Santa Barbara. Many of the Santa Barbara engineers currently practice today worked for him and benefited from his mentorship and generosity... With a keen eye for beauty in older buildings, Peter joined the Victoria Street Group (Bill Mahan, Ed Lenvick, Fred Sweeney, Jack Dewey), a small group of Santa Barbarans who painted every Saturday and exhibited their work at shows... Peter loved to sail on "Wet Wednesdays" with long time friends Tom and Nancy Bollay...”