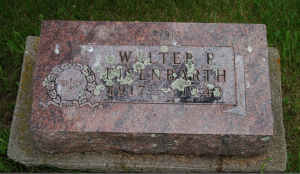 EISENBARTH, Walter Peter (1917-1943)[Service Number 37312876], gunner killed along with all twelve passengers in the Consolidated B-24E that crashed into Green Mountain on San Miguel Island on July 5, 1943. His hometown was Hazelton, ND.