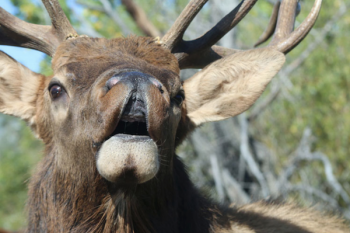 ELK were reported on Santa Rosa Island as early as 1879. They were supplemented by additional animals, most of them in 1930. The elk herd was numerous enough to manage by hunting, until they were eliminated under a forced agreement with Channel Islands National Park.

September 29, 1879 [SBDP]: “Mr. H. H. More shipped that elk doe to the island on Saturday, and expects in the spring to send over half a dozen of the same animals.”

March 10, 1880 [SBDP]: “The island of Santa Rosa… is a perfect paradise for stock, and has proved to be a bonanza to the owners… The More brothers have made a number of substantial improvements thereon… The place contains at present some 40,000 head of sheep, 250 head of Durham cattle and 150 head of horses and mules, besides a number of deer and elk that roam at will…”

December 20, 1905 [SBMP]: “The steam schooner Santa Rosa Island was in port yesterday morning taking on cattle to be fed on that island. Two live elk, a fine pair of antlered beauties were also taken aboard the ship for transportation to Santa Rosa. These will be added to the herd of 15 live elk now feeding on that island. The Santa Rosa schooner will sail early this morning for the islands.”

September 6, 1907 [LAH]: “Santa Monica, September 6. ‘Twas a sad farewell that characterized this parting today of Bruno, the tame elk which, at its birth two years ago, was adopted by the local Elks’ organization and members of the lodge. Bruno had grown into the hearts of the lodgemen and it was because they deemed it best for him that they agreed to his being transported to Santa Rosa Island, where he will have the freedom of 11,000 fertile acres during the remainder of his days. The animal was presented to the lodge by Bruno Enderlein. A launch conveyed Bruno from here to his destination.”

November 6, 1906 [SFCall]: “Extermination of elk fought with preserve. Animals will be propagated on private land. Santa Barbara, November 5. — Vail & Vickers of Los Angeles, owners of Santa Rosa Island, have started the propagation of elk on the island, and Frank Pepper, superintendent, says that it is the beginning of what will be a domain of game animals. Two years ago Pepper obtained two elk in the Sierra and took them to the island. There are nine fine specimens of this tribe grazing there. Other game animals are to be taken to the island in the near future. Pepper will bar hunters, the property being private. It is proposed to make the island a guard against the extermination of elk.”

November 5, 1911 [SBMP]: “A herd of elk, now numbering nine, is the nucleus of a game preserve that has been started on Santa Rosa Island under the management of Frank Pepper, superintendent of the big ranch property across the channel. About two years ago, Mr. Pepper secured from the Sierras, three specimens of elk, and transported them to the island, where they soon became acclimated. They have since thrived, the number increasing each season. It is an ideal range for them, and the day may come when the island may well be stocked with this species of game, now becoming extinct in other portions of the continent. Absolute protection is guaranteed on the island.”

August 31, 1927 [LAT]: “Santa Barbara. Ancient hut of seaweed found… announced today by David B. Rogers of the Santa Barbara Museum of Natural History… During his trip, he and his guide sighted a herd of elk on one of the plateaus…”

November 2-11, 1927 [HSD]: “Cervus nannodes (elk). Seventeen years ago [1910] three of these elk were taken from the herd at Buttonwillow, Kern County by the Vail Company and liberated on the island—a male and two females. For a while they seemed to do well in their new and different environment, increasing their number to about 20. But in recent years the herd has become smaller and smaller, until at present time, there appears to be only about half that number. Though the same blood would have a tendency toward degeneration over such a period of time, the animals seen were splendid specimens and most interesting in comparison to the Buena Vista ranch herd I have recently visited. The horns are of much larger proportions than any I noted of the valley animals… They are rarely seen by the cowboys as it was indeed fortunate to be treated to such a picturesque congregation of tule elk…”

April 27, 1930 [LAT]: “Twelve elk from Yellowstone National Park arrived at the Wilmington terminal recently and have been sent out to Santa Rosa Island off Santa Barbara, where they are to be the original stock of a herd that the Vail Company expects to raise on that protected tract of land. The herd consists of nine females and three males and cost $100 apiece landed at their new home. These animals are the gift of a well known sportsman, who is interested in the preservation and the propagation of wild game for California. This seems like an ideal place to try this experiment of raising elk in the State for the Vail property is inaccessible to other animas that might disturb them and yet is a fine range for elk. The increase will be given to municipal, State and private zoos if the experiment works out as anticipated. There are over 14,000 elk in the Yellowstone and each winter the park directors dispose of a number of them at cost of catching and shipping, yet local people feel that ones raised here in California and acclimated to this section will be more hardy and easier to care for in the zoos of the State. A herd of twenty-six deer from Kaibab forest, Arizona, was placed on this same island last fall.”

January 27, 1950 [LAT]: “Santa Barbara. Bing Crosby party has good hunting. Three elk and one deer were bagged by Bing Crosby and his hunting party on Santa Rosa Island, it was learned here today after the party arrived at Stearn’s Wharf.”

October 13, 2011 [SBNP]: “Helicopters were flying at Santa Rosa Island on Wednesday, but the Roosevelt elk and Kaibab mule deer, targets of sharpshooters aboard those helicopters, were nowhere to be found in the mid-morning sun. The News Press joined KCOY-TV on an aerial trip over the island courtesy of Shawn Knight of Knight Broadcasting. It was a cat-and-mouse game at times, with helicopters lifting off from the island’s airstrip, only to set back down once the plane carrying the media came into view off in the distance. All the while, on the ground trucks scurried about. The elk and deer, however, were out of sight. Numbering about 200, the animals are all that remain of herds introduced to the island in the 1920s by its former owners, Vail & Vickers. Their days are numbered as Santa Rosa Island moves from private to public ownership. Federal officials want to return the island to its natural state, before the non-native elk and deer were put there. And under a court-approved settlement stemming from the sale of the island 25 years ago, all elk and deer must be removed by the end of this month. The original plan was to slaughter the animals, leaving carcasses where they fall, but the National Park Service eventually agreed to a plan where much of the usable meat would be given to charity. The kill has set off a firestorm of anger from people who want to know why the remaining animals could not be left on the island, which, after all, they have inhabited for about 90 years. Short of that, others are decrying the fact that the animals were being killed instead of moved to some other long-term home. The final kill was to start on Tuesday, but officials say now it will happen sometime this week. The island is closed to the public through Halloween.”

October 15, 2011 [Noozhawk]: “Santa Rosa Island is in the middle of its final hunting closure and Channel Islands National Park officials have brought in professional hunters to kill the last of the non-native deer and elk living on the island 30 miles southwest of Santa Barbara. Vail & Vickers Cattle Co., which had owned the 83-square-mile island since the early 1900s, sold it to the National Park Service in 1986 for $30 million. Afterward, the company was contracted to manage an annual private hunting operation on the island that targeted the deer and elk. A legal settlement with the National Parks Conservation Association demands that all of the animals be gone by the end of 2011, Channel Islands National Park spokeswoman Yvonne Menard said in a news release. Commercial hunting began in August and the island is completely closed this month to allow park rangers and “a cooperator” to remove any remaining deer and elk, which had been imported to the island as game animals nearly 100 years ago. There will be restricted public access only on weekends through December, Menard said. After that, the entire island will be open to the public year-round. Santa Rosa Island is home to more than 100 bird, mammal, amphibian and reptile species and colonies of sea lions, seals and seabirds. To protect those habitats, the park has a policy to prevent non-native species on the islands and prohibits bringing pets, live or potted plants, cut flowers, soil or firewood to them. “These temporary closures are meant to ensure safety during this final removal of deer and elk from Santa Rosa Island,” Park Superintendent Russell Galipeau said in a statement. “Beginning in 2012, there will be no visitor restrictions for hunt management.”