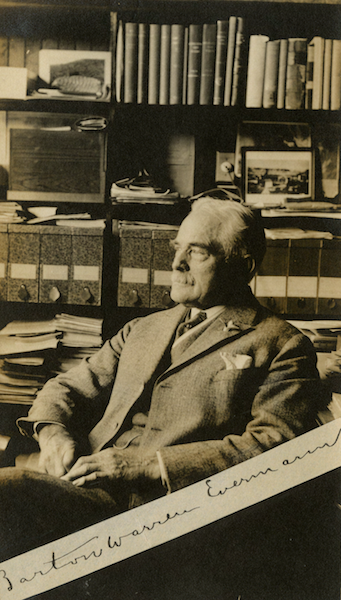 EVERMANN, Barton Warren (1853-1932), Iowa-born naturalist and ichthyologist, and 1886 graduate of Indiana University. During his career, among other things, he served as ichthyologist for the United States Bureau of Fisheries in 1891; lecturer at Stanford (1893-94), Cornell (1900-03) and Yale (1903-06); and director of the California Academy of Sciences from 1914 to 1932. Evermann was also interested in birds and botany.

During the 1880s, Evermann came to Ventura County early in the decade and enthusiastically collectedand studied birds there for several years. He published his observations.

Evermann made collecting trips to all eight California Channel Islands in 1918 and 1919, thus becoming one of the earliest known scientists to visit all of eight islands. Plants he collected on Santa Catalina Island in March 1918 are in the herbarium at the California Academy of Sciences. He also collected eggs on several islands.

His specimens are located in the California Academy of Sciences. In addition, Evermann also served on the Board of Governors of the Cooper Ornithological Club. The November 1928 Santa Barbara Museum of Natural History Leaflet congratulated Evermann on the occasion of his 75th birthday “for his long and active career, and his energy and vision in the field of scientific work.” Evermann died in Berkeley, California at age 78.

March 22-31, 1918: During the latter part of March (March 22-31) the Museum sent an expedition to the Channel Islands off the coast of Southern California. The party consisted of the Director of the Museum [Evermann], the Curator [Van Denburgh] and Assistant Curator [Slevin] of the Department of Herpetology, Mr. Joseph Mailliard of San Francisco, and Mr. J. Eugene Law of Los Angeles. Through the courtesy of the California Fish and Game Commission the party was able to visit San Clemente, San Nicolas, Santa Barbara and Santa Catalina islands. This opportunity is taken to express to the officials of the Fish and Game Commission, especially Mr. Carl Westerfield, Executive Secretary; Mr. N. B. Scofield, assistant in charge of commercial fisheries; and Captain H. B. Nidever of the Commission’s patrol boat Albacore, the appreciation of the members of the party of the courtesies extended. Equal appreciation must be extended also to E. G. Blair, President of the San Clemente Sheep Company, for permission to land on San Clemente Island and for making our stay on that island very pleasant. We are also indebted to Captain H. W. Rhodes, Inspector 18th Lighthouse District, for permission to land on several lighthouse reservations. The trip to the islands proved quite successful. A large collection of lizards was obtained on San Clemente, and considerable collections of birds, nests and eggs, insects, shells, and plants were obtained from the various islands. One interesting result of the expedition was the addition of several birds to the known fauna of the islands, including the Pied-billed Grebe and Arkansas Kingbird on Santa Catalina; a species of Junco (probably Thurber’s), Western Chiping Sparrow, Lincoln Sparrow, Dusky Warbler, and Audubon Warbler on Santa Barbara, and what was believed to be the Cactus Wren on San Clemente.” [Evermann. Director’s Report for 1918 CAS Proceedings 4th Series VIII: 321-322].

May 15, 1919 [SBDN]: “With Dr. Barton W. Evermann, curator of the Academy of Science, San Francisco, and a party of scientists aboard, the State fisher patrol boat Albacore, Captain H. V. Nidever, left last night for Santa Cruz and San Miguel islands, where the scientists will conduct research work. The Albacore has headquarters at San Pedro, and patrols the coast as far north as Monterey.”

May 15-21, 1919: “A collecting party consisting of Dr. Van Denburgh, Mr. Slevin, Mr. Van Duzee and the Director [Evermann] spent a week (May 15-21) on the Channel Islands off the California coast, the particular islands visited being Anacapa, Santa Cruz, Santa Rosa, Prince, and San Miguel. The party was able to visit these islands through the courtesy of the California Fish and Game Commission, and I wish to take this opportunity to express to the officials of that Commission, especially Mr. Carl Westerfield, Executive Secretary; Mr. Norman Scofield, assistant in charge of commercial fisheries; and Captain H. B. Nidever of the Commission’s patrol boat Albacore, the appreciation of the members of the party of the courtesies extended. Captain Nidever did everything possible to make the trip a success. Our thanks are due also to the Messrs. Arthur and Fred Caire of the Justinian Caire Company for permission to land on Santa Cruz Island, to Vail and Vickers for permission to land on Santa Rosa Island, and to Captain H. W. Rhodes, Inspector of the 18th Lighthouse District, to land on Anacapa and San Miguel islands. The trip to these islands proved quite successful and considerable collections of natural history specimens were obtains, the most important in the following departments: entomology, 1965 specimens; herpetology, 201 specimens; oology, 190; conchology, 100.” [Evermann. Director’s Report for 1918 CAS Proceedings 4th Series IX: 375].