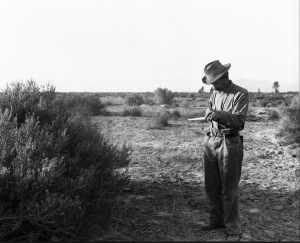 EYTEL, Carl A.(1862-1925), German-born artist of a wealthy family, he studied forestry and spent a year in the military service before immigrating to America in 1885. He became obsessed with the Old West and painting western and desert scenes. For a time he worked on a cattle ranch in Kansas. He died on September 17, 1925 in a tuberculosis sanitarium in Banning, California. Eytel is buried at Agua Caliente Indian Cemetery, Palm Springs.

October 20, 1912 [LAT]: “Gerald Cassidy, the Denver painter who has been sketching for the past three months in Southern California, has just returned from a trip of several weeks in the little-visited, but picturesque island of Anacapa, where he found many interesting scenes, which he has placed on canvas. He has been urged to exhibit them in California before leaving, as he is the only artist who has been at Anacapa to sketch, with the exception of Carl Eytel, who was there many years ago.”