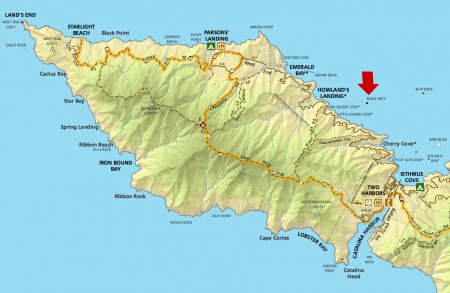 Eagle Reef, Santa Catalina Island is located 800 yards offshore to the north of Cherry Cove. Its highest point is about three feet underwater, depending on the tides, and it is marked with a warning buoy and flashing light. The reef is 450 yards in length, running east to west.

August 9, 2010 [LAT]: “Coast Guard ends search for missing Catalina boater. The U.S. Coast Guard on Monday called off its efforts to find a missing boater off the coast of Santa Catalina Island, ending a nearly 24-hour search. Frank Cipriano, 45, has been missing since about 10:45 a.m. Sunday, when his shipmates on The Indecent Proposal, a vessel anchored in Cherry Cove, woke up to find that he was no longer aboard. The Indecent Proposal's dinghy was found about a mile away in Eagle Reef. Two Coast Guard cutters and a helicopter scoured about 144 square miles of ocean, according to spokesman Matthew Schofield, but they found no trace of Cipriano. Cipriano is about 160 pounds and was last seen wearing a polo T-shirt and black board shorts, according to the Coast Guard.”

August 21, 2013 [Orange County Register]: “ SANTA CATALINA ISLAND – Rescue teams were searching Sunday for an Orange County man whose boat was found drifting about a mile offshore from the island cove where he was staying overnight. Frank Cipriano, from the Newport Beach area, anchored his 46-foot-long powerboat in Cherry Cove on Santa Catalina Island on Saturday night; he was with a family who hired him to pilot the watercraft, the U.S. Coast Guard said. Cipriano told the family he was going to nearby Isthmus Cove in his smaller boat, a dinghy, presumably for supplies, said Coast Guard Lt. Aaron Dwoskin. Cipriano took two dogs with him. When the family of four woke up Sunday morning on the larger vessel, the dogs were back on the boat, but Cipriano and the dinghy were gone. By 10:45 a.m., the family grew concerned and contacted authorities. "They didn't think it was unusual when they didn't see him around in the morning – until they were ready to get going," Dwoskin said. Search teams found Cipriano's dinghy about a mile offshore near a diving spot called Eagle Reef, but Cipriano was not on board. The U.S. Coast Guard and Los Angeles Sheriff's Department harbor patrols spent all day Sunday searching for Cipriano, covering 400 to 500 square miles by 6 p.m., the Coast Guard said. Four watercraft and two helicopters were involved in the search. Two of the watercraft were expected to continue searching all night, and the helicopters were expected to resume at dawn Monday. Rescue teams also will revisit the same areas they've already covered. "We don't know what time he went in, but if he was wearing a life jacket, his chances (of being found alive) are increased," Coast Guard Lt. Anastacia Thorsson said. Diving teams also searched for a body underwater in the Eagle Reef area, Dwoskin said. Cipriano is described as in his late 30s, about 160 pounds, wearing black board shorts and a polo-style T-shirt. He is from Newport Beach or a neighboring city; authorities are still working to confirm his exact address, Thorsson said. There is no evidence of foul play, Thorsson said. The Coast Guard is asking boaters to immediately call 911 if they see a man resembling Cipriano. "We also would like to remind people if they are boating, to have their life jacket on," Thorsson said.”