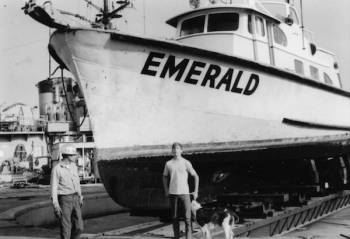 June 1980 [Soundings]: “Historic California vessel goes down. The Emerald was used as a mailboat and a logging tug at Lake Tahoe and rests at the bottom of the Santa Barbara channel. The 93-year-old Emerald, part of California's nautical history, lies at the bottom of the Santa Barbara channel. The restructured fishing and diving vessel, believed to be one of the oldest commercial boats in service in the United States, went to the bottom March 14 about 12 miles south of Santa Rosa Island in waters about -00 feet deep. "The insurance company isn't giving us any word on whether a salvage attempt will be made", said Jeanette Bueno, who, with her husband Alex, a fisherman, is the registered owner of the 65-foot power boat. Emerald's value was reportedly about $85,000. Salvage attempts may not be undertaken because of the depth at which the vessel lies, the couple said. Bueno and Bill Nunes were aboard Emerald when the stuffing box, which holds the packing around the propeller shaft, apparently gave way and water began pouring in. "I put out the mayday call and a Navy helicopter responded," said Bueno. The helicopter had to return to its Port Hueneme base to get a pump, and when it returned about an hour later it was too late, Bueno said. The two men took to a rubber raft and soon were taken aboard another boat. The fishermen did manage to take some items and mementos off the sinking boat, including the wheel. It carried the number 1887, worn away by time. That was the year the iron-hulled logging steamer was completed by the Union Iron Works in San Francisco. Its beam was only nine feet, intentionally narrow to allow it to be shipped by train from the coast through wooden tunnels and snowsheds of the treacherous Donner Pass. Historians recorded that it took 36 oxen 10 days to haul at Carson City to the mountain-locked Lake Tahoe. The craft plied the lake for nearly half a century, carrying mail for gold miners. It was also used as a tug in the thriving logging operations of that era. Its name apparently is derived from the picturesque Emerald Bay area of the lake. It was retired in 1935 and sold six years later to an Oakland shipyard. In the mid-1940s an individual whose name is lost to the past, bought the vessel. The craft was to have been used on San Francisco Bay, but it was considered unseaworthy for the bay's tempestuous waters because of its narrow hull. The owner had the vessel moved to Terminal Island near Los Angeles and, using the original hull as a form, built a new hull around it in 1948. Originally 60 feet long and 9 feet wide, it grew to 65 feet, with a 16-foot beam. Emerald was owned and operated for 11 years as a skin diving and charter boat by Glenn Miller, a Santa Barbara businessman and longtime sailor. He sold the boat to the Buenos in 1974.”

November 1982 [National Fisherman]: “The Emerald — an unforgotten gem of a steam tug. A grand old lady, the Emerald, reluctantly slipped beneath the waves off Santa Cruz Island in the Santa Barbara Channel on the morning of March 14, 1980. She sank in the line of duty after 93 years of active service. The Emerald was built in the shipyard of the old Union Iron Works in San Francisco. Originally, this foundry made mining machinery during the California gold rush. Later, as San Francisco continued to prosper, the company decided to open a shipyard, and in 1885 it launched the first iron-hulled ship ever built on the west coast, the 800-ton Arago. The yard built many more commercial ships as well as warships for both the American Navy and foreign nations, but Union Iron Works' fifth hull proved to be one of its most durable. In early 1887, the keel was laid for a steam tug designed for use in the lumber industry that was beginning to boom around Lake Tahoe in eastern California. The new vessel, which was to be the Emerald, was unlike any tug seen today. She was a sleek as a greyhound — 60' long but only 9' wide, and odd size that permitted the new ship to be transported by rail through the tunnels and snow sheds of the high Sierras that lay between the bay and Lake Tahoe.

A tall pilot house stood near the bow, with a low engine housing extending almost to the stern. The bow was plumb while the stern had a small overhang and was pleasantly rounded. A thin smokestack extended skyward amidships. A high railing ran the length of the vessel. The Emerald was strongly built, though no one then could have predicted her longevity. The keel was a solid 1' x 6" flat iron plate, and her frames were closely spaced 1-1/2" x 3/4" I-beam-type wrought iron. Hull plating was 1/8" iron, double riveted on the seams, and the deck was 3/8 -thick iron. An 85-h.p. steam engine turned a 4' propeller, providing enough power to drive the vessel at 15 knots.

Historians differ as to the exact route taken by the hull as it was transported from the shipyard to the lake after completion. According to one version, the boat was taken off a rail car at Truckee in California and then hauled to Tahoe City for launching. Another account has the train proceeding to Carson City, Nevada, with the boat then taken directly to Glenbrook on the east shore of Lake Tahoe for launching. Whichever route was actually followed, the 15-ton hull had to be transferred carefully from the flatcar to waiting high-wheeled lumber wagons, which hauled it 10 miles or so to the lake. The journey was surely horrendous for man and beast, for the lumber trails were rough and primitive, and the drovers, some say, had to manage as many as 24 to 36 teams of oxen and mules. One slip could have spelled disaster for the men, the animals or the ship, for it would have been well nigh impossible to place the iron hull back on the wagons if it had fallen off. Relief must have been widespread when the hull arrived safely at the lake shore in the middle of May 1887. There, workmen installed the machinery and boiler. On June 15, 1887, the task was finished, and the Emerald was launched on her career at last.

Lake Tahoe Tug. The site of her work was what many consider the world's most lovely high mountain lake. Lake Tahoe is 6,223' above sea level, runs almost 1,000' deep in places and extends roughly 22 x 12 miles. It is surrounded by towering mountains on all sides, with some ranging over 6,000' above the lake. Many of the peaks are snow-clad much of the year.

The Emerald's first task was to haul the immense timber rafts around the lake. The intensive lumbering industry had developed to provide timbers for the Comstock silver mines in Nevada and firewood for boilers to run the mining equipment. To meet this demand, Messrs. Bliss and Yerington and several other investors formed a company known as the Carson and Tahoe Lumber and Fluing Co. in 1873. The company bought up lakefront property in Glenbrook, Nev., for its mill site and added some 7,000 acres of forested mountain land to begin operations. Logs from the giant virgin pines covering the slopes were hauled by wagon or sent rumbling down long V-shaped flumes to crash spectacularly into the lake. There the logs were gathered and into great rafts which the Emerald towed to the mill... As the Comstock Lode dwindled...Closure of the lumber mills followed quickly... [Emerald] was placed on a cradle on the shore near Tahoe City, and there she sat for some six years... at war's end she found herself back on a truck, this time bound for Los Angeles. Her second career was about to begin, some 60 years after her launching at Lake Tahoe...

[Lester Carlson] bought the Emerald in 1948 and moved the old hull to Booth's Brickyard on Stanford St. in Santa Monica, just down the street from where he lived... By 1949 his renovation was complete. The vessel was formally documented for the first time, and Carlson had a mooring off the famous Santa Monica Pier. He was all set-to-go into business as a charter boat captain, taking sport fishermen out for halibut and other species...

In the spring of 1964, the Emerald was sold up the coast to Glenn Miller of Santa Barbara. For $14,000, Miller took over the Emerald, turning her back to charter work, this time out of Santa Barbara... In 1974 Miller sold the Emerald to an associate who had worked with him, a young Cuban refugee named Alex Bueno...

March 14, 1980, dawned gusty winds and rough off Santa Cruz Island in the Santa Barbara Channel. Bueno and a friend were hook-and-line fishing for rock cod and trying to remain as comfortable as possible while rolling heavily in the steep swell. Suddenly the Emerald no longer seemed to be responding to the regular motion of the sea. Alex darted below and found water up to the floor boards. Suspecting a plate in the stern section, or a loose fitting, Bueno dropped into the engine compartment to seek the source and plug it if possible. Working in the rising waters, he was unsuccessful... There was nothing left to do but to call the Coast Guard... But a large air pocket in the bow let go and the remarkable ship settled slowly below the surface to plunge 100 fathoms into the ocean bottom...”