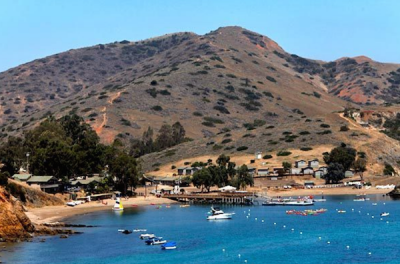 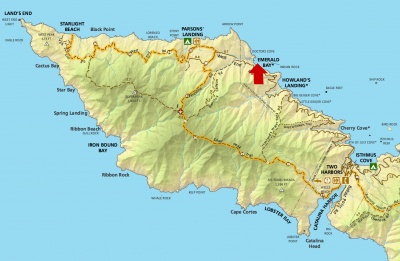 Emerald Bay, Santa Catalina Island, called Wilson's Valley in 1864, appears on an 1893 topographical map of "The Island of Santa Catalina in part from the U.S. Coast Geodetic Survey." It is also shown on a map in The Islander on August 1, 1916. It is located on the more remote west end of the island, to the west of Howland’s Landing. It is the burial site of Samuel Prentiss (c. 1784-1856). Indian Rock is located in the bay.

Historically the bay was occupied by the Johnson brothers, John and Charles, who used the area to graze cattle and sheep. Parts of their fences can still be found today.

In 1925, the Crescent Bay Area Council founded the Boy Scout facility at Emerald Bay. It operated for 15 years until the Navy requisitioned the camp for underwater demolition training. Some of the oldest cabins are the remnants of the officer and trainee housing from this era. In 1946 the camp reopened with 15 staff serving about 80-100 campers. Today the camp serves up to 5000 scouts over a summer and needs 150 staff to operate.

The bay has 100 moorings and anchorage for five to ten boats. This cove offers a long strip of natural sandy beach that boaters an access. The Corsair Yacht Club and a Boy Scout Camp have facilities here which are private and not open to the public.

The Corsair Yacht Club, limited to 75 members, secured a lease at Emerald Bay with the SCICO, and for more than 50 years has sponsored the annual Two Harbors Easter Egg Hunt.

June 12, 1864 [DAC]: “Letter from Santa Catalina Island. June 3rd, 1864... Wilson's Valley [Emerald Cove], a mile further westward [from Howland's Landing], is the largest and most pleasant of the three last named [Fourth of July Valley; Cherry Valley; Howland's Valley]. It has a fine beach in front, and equals Howland's in its water privileges. Its proprietor, after whom it is named, is a man of some wealth, and has been located here with his family for quite a number of years. His sheep and goats range the mountains undisturbed, and at the proper season of the year return to yield him their golden fleeces. The only grave I saw upon the island was at this place. Opposite his residence, scarcely a furlong distant, on a pleasant slope near the seashore, is a solitary grave, surrounded by pickets painted dark brown. The lonely occupant of that small enclosure doubtless sleeps well. I looked upon it and sighed, wondering if his days had been spent in toiling—mining—or busy trade: envied the lot of the sleeper, and passed on to the shore, to hold communion with the deep, dark, rolling, restless sea...”

April 30, 1904 [LAT/SCat]: “Avalon. C. A. Bryant, proprietor of the stage line, gave a picnic to a party of friends yesterday taking them to he Isthmus on one of his stages. The start was made at 8 o’clock, a perfect day favoring the excursionists… Arriving at the Isthmus, and lunch being disposed of, Mr. Bryant, leaving nothing undone for the entertainment of his guests, took them over the speedway, only just completed, to Emerald Bay, a most charming drive. At 4:30 they boarded the Meteor for the trip by water home, arriving at 5:30.”

March 12, 1918 [TI/Avalon]: “The site selected by the English syndicate, who once controlled the island, for the principal town. The little valley and the hillsides adjoining were all staked out, and the hills are yet bristling with white stakes. Here was located the Bauchet mine, which was worked up to a comparatively few years ago, when he disappeared suddenly, leaving all his belongings, furniture, clothing, etc., in his cottage, but he never returned to claim it.”

August 17, 1991 [LAT]: “After 65 years, the Boy Scout camp on Santa Catalina Island's Emerald Bay is losing its lease and will close after the last group of boys leaves Aug. 24, the end of the summer season. The Santa Catalina Island Co. has canceled the Scouts' lease to make way for a $2.5-million aquatic resort and education center to be built by the Cousteau Society. Scout officials have appealed to the island company to save the camp, but their prospects of success look grim. "We are hoping for a big miracle . . . (that will) keep Scouting here," said Toby Sharp, director of the camp that over the years has introduced more than 100,000 Southern California youngsters to the island's marine environment. The Cousteau facility is seen as a major step in the company's plan to increase the number of resort and recreational developments on the island 22 miles off San Pedro. "We're not picking on the Boy Scouts," said Paxson H. Offield, president of the island company. "We're looking at all of our coves . . . to develop more environmentally sensitive, year-round uses." At least one other youth camp, operated by the Girl Scouts at White's Landing, may also lose its lease by year's end, officials said. The Santa Catalina Island Co.--owned by the Wrigley family since 1919--owns most of the developable land in the coves and harbors on the rugged, 76-square-mile island. The remaining 86% of the land is owned by the Santa Catalina Island Conservancy, a nonprofit organization created by the company to protect the island's environment. More than 42,000 acres of the mountainous interior and coastal headlands are preserved as open space under state law. The company and the conservancy have embarked on a program to restore and protect the island's native plants and animals. Officials say one of their goals is to eliminate the impact of hundreds of Scouts in one place. The West Los Angeles Council of the Boy Scouts of America has operated Camp Emerald Bay since 1926. It is one of only two or three such ocean-based camps in the nation, and officials rank its aquatic program as the best of its kind. The Cousteau resort would offer marine environmental studies and cater to what Cousteau officials call "ecological tourism,"--upscale, relatively costly recreational diving and other aquatic tourist activities aimed at educating adults and children to protect the marine environment. "We realize (the Scout camp) has been there a long time, but we had to make a decision about what was best for Catalina Island," Offield said. "We've made a commitment to the Cousteau Society." The news that the camp will close saddened Scout leaders. "It's like a death in the family," said Steve Kofohl, a high school math teacher who has given 30 of his summers to the camp. Jerry Kleeman, a Redlands Scoutmaster agreed, adding: "We love this place; there's no program like it anywhere." Others were angry. "This is the opening wedge for the commercialization of Emerald Bay," said Steve Martin, a Woodland Hills attorney and former Scout leader who is spearheading the drive to save the camp. Martin said the company was insensitive to the role the Scout camp played in providing opportunities for boys who cannot afford the upscale Cousteau program. During its two-month season, the Scout camp takes 400 boys a week from troops throughout Southern California and the West. By summer's end, 3,200 will have slept on cots in the green tent platforms, eaten in the rustic old dining hall and canoed in the bay. The Scouts still hope to work out a compromise that will preserve some Scouting on Emerald Bay. Scout leaders said they were meeting with Cousteau officials to attempt to work with them on the development, but even that proposal seemed doomed. "There just can't be any joint participation," said Larry Callahan, director of Cousteau's Emerald Bay project. Callahan said the Cousteau Society is planning a low-impact environmental resort and education center that will accept only 50 to 100 paying guests at a time. A Scout camp taking hundreds of boys a week does not fit that concept, he said. "As required by the lease, we're proposing to reduce the number of people using the area and reduce the impact on the environment," he said. Island company and conservancy officials said they elected to go with the Cousteau proposal because it offered a year-round, low-density, environmentally sensitive development. Scout officials heard that the lease was in jeopardy in April and had been negotiating to save the camp. Discussions centered on a $3-million Emerald Bay renovation plan that would have opened the camp for year-round use. The Girl Scouts were equally disappointed to learn that they, too, may be forced to move from their camp at White's Landing when its lease with the conservancy expires in December, said Florence Newsom, executive director of the Angeles Council of the Girl Scouts of America. "The conservancy is looking for alternatives at White's Landing. It is an area that is way underused," Offield said. "This doesn't necessarily mean the Girl Scouts would have to move out, but that is a possibility." As word of the lease cancellation spread through the old camp this week, Boy Scouts and their leaders were stunned. "This is my 10th summer on the island as a Scout, then a Scout leader," camp director Sharp said, standing on the dock watching scores of happy youngsters paddling red canoes around the bay. "I really hate to think we'll lose the cove. It's a very sad thing."”

July 9, 2017 [TI/Avalon]: “Deputies responded to Emerald Bay Boy Scout Camp regarding a person not beathing. Upon their arrival, deputies learned first responders had been giving a 60-year-old man, from Santa Ana, CPR for over 45 minutes trying to save his life. The man did not respond and ultimately passed away. It was determined the man died of apparent natural causes.”

Cousteau Family Camp “Jean Michel Cousteau Family Camp is a cooperative effort between Ocean Futures Society and Catalina Island Camps. Each summer since 1997, Jean-Michel Cousteau and Dr. Richard “Murph” Murphy and other Ocean Futures staff have come to Howlands Landing for a 5 day 4 night family camp adventure. Jean-Michel brings the spirit and excitement of a Cousteau expedition to families in the fun and relaxed setting on Howlands Landing. Family Camp is a unique opportunity to get to know Jean-Michel personally and experience his message of inspiration and hope. Explore the program information, then download the application, request us to mail a packet to your home or call us with questions. Please be aware that Family Camp fills quickly each year since there are only spaces for 20 families in camp cabins. If you have your own boat that you can live on during the camp, there are special arrangements on the application.”