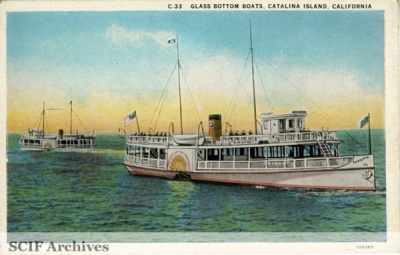 Emperor (#209755) (1912-1930) 107-foot, gas-powered, side-wheel glass-bottom passenger vessel built in Los Angeles for the Banning's Wilmington Transportation Company before WWI. Emperor operated at Avalon, Santa Catalina Island and carried a crew of four. Construction cost $65,000. Emperor was built with a viewing well so passengers could observe underwater sights. After 18 years of service, Emperor was battered beyond repair during a heavy Santa Ana wind storm in November 1930. She sank while on her bow mooring in outer Avalon Bay. Parts were salvaged for future use in construction of the Phoenix, which was launched to replace the Emperor.

December 18, 1917 [TI/Avalon]: “Captain George B. Johnson passed away Tuesday morning, at his winter residence in Banning, Cal. He was 41 years of age… During the past ten years he has been Master of the different vessels operated by the Meteor Boat Company, and last summer was compelled to resign his position as Master of the Emperor, (the largest glass-bottomed powerboat in the world) owing to ill health. Six years ago he made a trip to Lower California as navigator of the yacht Comfort.”

April 30, 1918 [TI/Avalon]: “The glass-bottomed powerboat Emperor, taken over by the U.S.A. and used as a ferry at San Diego, is doing fine war work in spite of its name — and what some of the boys say about that name makes Captain Halstead laugh.”

January 14, 1925 [TI/Avalon]: “Capt. Claude Walton left for Long Beach Sunday, to bring back the glass-bottom boat Emperor, which has been recently overhauled and redecorated.”

November 26, 1930 [TI/Avalon]: “The derrick barge of the Wilmington Transportation Company arrived here Monday and Captain C. E. Morris and Captain Claude Walton with the equipment, successfully raised the sunken hull of the glass bottom boat ‘’Emperor’’. After the water had been pumped out of the disabled vessel it was towed to the Wilmington Boat Works, where a survey will be made of the hull to determine whether or not to rebuild the superstructure thereon. ”

December 17, 1930 [TI/Avalon]: “It has been announced that the contract for building a new glass bottomed boat to take the place of the ‘’Emperor’’, wrecked during the November gale, has been let to Wilmington Boat Works. The craft [‘’Phoenix’’] will be 107 feet in length, and is to be completed by June 1, 1931.”

February 5, 1931 [LAT/SCat]: “Avalon. In ‘recognition of the saving of life on the high seas,’ the Mrs. William Wrigley, Jr. awards of a handsome gold watch to each were presented to Captain William Cummings, First Officer Frank Penoyer and Second Officer Gustav Metji of the S.S. Avalon and to Harry Boosinger of the glass-bottom boat Emperor… Harry Boosinger, the fourth man to receive recognition for valor from Mrs. Wrigley, was cited for his courage in leaping overboard into a seething sea during a storm when a companion was swept overboard from the glass-bottom boat Emperor, through being drawn down through the suction created as the boat sank at its mooring.”

March 25, 1931 [TI/Avalon]: “Captain Claude Walton informs us that arrangements are being made for launching the new glass-bottomed boat, the Phoenix, successor to the Emperor, wrecked during a winter northeaster. It will probably occur next Wednesday, April 1st. Furthermore, the vessel will probably be placed in commission May 1st. We understand that the new boat has several improvements over such boats heretofore built.”