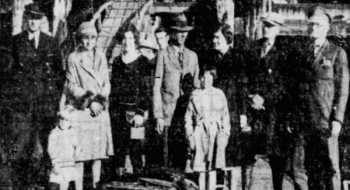 December 7, 1930 [San Berdardino Sun]: “Rescue Yacht Party After Wreck of their Boat. San Diego, Dec. 6.—Nine members of an ill-fated yachting party marooned November 30 when the motor ship Eola was wrecked on the northeast coast of Guadalupe Island, 220 miles south of here, tonight were being returned here by the U.S.S. destroyer, Aaron Ward. The party was rescued late today when the airplane carrier Langley , searching for the lost fishing smack Fidelity, sighted the wreckage of the yacht. While details of the rescue were lacking in the radio message, which the Langley sent the eleventh naval district headquarters here, it was declared all members of the party were saved. The group was taken aboard the Langley and later transferred to the U.S.S. Langley, one of the 10 navy craft which left here yesterday on an intensive search for the Fidelity. In the party were Captain L. Sayers, S. J. Frisbee, Anna, Lucille and Hazel Frisbee, Mrs. Martie Johnson, J. N. McFate, H. R. Tiffany and the engineer. The latter's name was not available. All but Sayers were said to be residents of San Diego. The Eola left Los Angeles harbor on Nov. 26, bound for the southern end of Guadalupe Island where McFate, in charge of the party, is establishing a goat farm. McFate had chartered the yacht from J. P. Kilkenny of Los Angeles, for the trip, Killkenny, reached late tonight at his home, knew little of the venture and was unfamiliar with the passenger list. He said McFate had obtained a concession from the Mexican government to capture bands of the wild goat which inhabit the island. The San Diego promoter, according to Kilkenny, hoped to establish the largest Angora wool farm in the world. He had launched the project weeks ago, but was returning to determine its progress. Guadalupe Island is about 220 miles south of San Diego and is noted for abundance of wild game. The waters surrounding it abound in fish and many professional and pleasure craft go to the vicinity. A radio received at the naval station from the Langley indicated that the Fidelity and its 11 crew men may have touched at the island but the owner of the missing craft said he did not believe this possible. The Langley message said that a caretaker on Guadalupe Island reported the Fidelity dropped anchor on Nov. 23 and sailed away in a northeast direction the next day. Tony Estosite, owner, was informed of the message and replied that he believed the boat referred to must have been the Vitality. The Fidelity, he said, could not have been in Guadalupe waters on Nov. 23.”