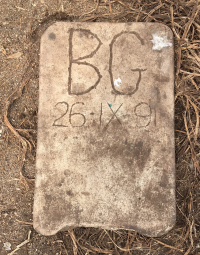 1862: “In the season of 1862, a young adventurer, who had joined the party of egg-pickers for perhaps no other reason than to obey his own impulse, thoughtlessly ventured so far upon the brink of a towering height, that, casting a glance at the waves below, the effect was such as to nearly paralyze him, when he fell, and was dashed to atoms.” [C.M. Scammon Beacons of the Golden Gate, July, 1875]

June 16, 1863 [SDU]: “The Italian captain of the schooner Red Jacket, who was wounded in the Farallon Island fight, died tonight in the hospital.”

March 18, 1879 [SDU]: “William Borgirandt, a fisherman belonging to the schooner Mary E. Donovan, was lost overboard about 11:30 last night near the Farallones. Efforts to save him were unavailing. He was heard to cry "Oh My God!" then a gurgling sound followed as he sank.”

April 22, 2012 [SFGate]: “On a warm spring day, the Farallon Islands are easy to see from San Francisco and Marin County - they look like painted islands on the horizon, on the edge of the Pacific Ocean. The Farallones are 28 miles out at sea, but are officially part of the City and County of San Francisco. They were the scene of the worst yachting accident in years on April 14, when a 38-foot boat called Low Speed Chase was driven on the rocks while rounding the islands as part of the Full Crew Farallones Race. One sailor was killed and four are lost at sea. What exactly happened in the seconds when the boat was overwhelmed by a breaking wave is still a mystery. But according to veteran sailors, there could only be two causes: bad luck or a fatal error in judgment. There were also risky choices: The eight sailors aboard the Low Speed Chase wore survival gear but were not clipped to lines tethering them to the boat, so that when the wave hit, five of them were instantly swept overboard. At that point it was too late to do anything - too late to head the boat around and try to pick them up, too late to turn away from the rocks. It was an impossible situation; five of the eight crew members were in the water, the boat was on the edge of foundering, and there were only three people left to handle the sails, or start the engine. They were close to the rocks, and the waves were coming from every direction, and they were about to be hit by another wave. They were seconds from death. "Even a Navy SEAL would feel panic in that situation," said Kimball Livingston, editor at large of Sail magazine and an experienced ocean sailor. "I'm surprised anyone survived." The day began at the San Francisco Yacht Club in Belvedere, home port of the Low Speed Chase. The club is the oldest yacht club on the Pacific Coast, founded 143 years ago in San Francisco; yachting is one of the oldest sports in California. The club opened in 1869, the same year college football was born on the East Coast. The Low Speed Chase was of Australian design, "a high-end racing boat, fast, a good boat," said Andy Turpin, editor of Latitude 38, the sailing magazine in Sausalito. Boats like this would cost about $200,000, he said. The boat was owned by James Bradford, a 41-year-old San Francisco investor. Bradford had seven in his crew, all experienced yacht sailors: Alexis Busch, Alan Cahill, Bryon Chong, Jordan Fromm, Marc Kasanin, Elmer Morrissey, and Nick Vos. Cahill, who like Morrissey was born in Ireland, was a professional sailor. It appears likely that he was at the helm during the race. Bradford, Chong and Vos survived. The others were lost. The lives of the crew were intertwined, in the way of people who follow the salt water. Busch and Vos were sweethearts who met at Redwood High School in Larkspur 10 years ago. The others were from boating families: Kasanin, whose father was a maritime lawyer from Belvedere, had been sailing since he was 5 years old.”