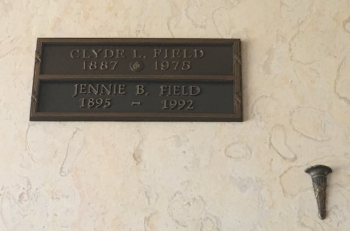 FIELD, Clyde Leon (1887-1975)[SS#562-07-6463], native of Kansas who moved to San Diego County with his family when he was two years old. Field became an engineer with Standard Oil Co. where he worked for 35 years. Field was an active oologist, advertising egg sets for trade in 1926 when he was almost 40 years old.

The Cooper's hawk has few enemies, except for the farmer or the sportsman with a gun, but the following account, sent to me by Clyde L. Field, shows that the spunky little kingbird can make life miserable for this hawk and defend its territory successfully against it: Published in 1937: Smithsonian Institution United States National Museum Bulletin 167: 112-125

James Rooney has sent me the data for a set of four eggs of the black-fronted warbler, taken by Clyde L. Field in the Santa Catalina Mountains in Arizona, June 2, 1938.

September 24, 1948 [Chula Vista Star]: “Elizabeth Field to wed Ray Livesay. The traditional box of chocolates were passed to the members of Alpha Delta Chi sorority at San Diego State College Monday evening to announce the engagement of Miss Elizabeth Eugenia Field, daughter of Mr. and Mrs. Clyde Field of National City to Ray Livesay, son of Mr. and Mrs. Virgil Livesay, 695 F. Street. No wedding date has been set. Miss Field, a native of National City, received her schooling there and graduated from Sweetwater Union High School in June 1946, after which she attended State College. She attends the First Baptist Church in Chula Vista.”

September 9, 1975 [SDU]: “Clyde L. Field. Services will be at 3 p.m. today in Berge-Roberts Mortuary for Clyde Leon Field, 88, of 2534 K Avenue, National City, a county resident for 86 years. Entombment will follow in Cypress View Mausoleum. Field, a stationary engineer with Standard Oil Co. here for 35 years, died Friday in a hospital. A native of Kansas and a Navy veteran of World War I, he was a member of Southwest Lodge 283, F&AM. Surviving are his widow, Jennie B.; a daughter; three brothers, including Hollis of San Diego and Paul of National City; a sister; three grandchildren, a great grandchild.”