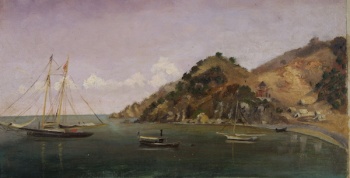 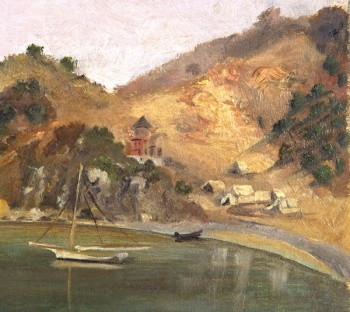 FISH, Mary Stevens (1841-1895) was born in Sidney Plains, Delaware County, New York on February 24, 1841. She became one of California's earliest professional women painters. Mary Stevens Fish was born to Rev. John Berrien Fish (1794-1869) and his second wife, Nancy Stevens Fish (1803-1887). Mary's determination to be a professional artist is evident in almost every historical fact known about her. She arrived in California at the age of 33 already a trained artist. She studied with one of the finest early California artists and she herself becomes an art teacher. She never married and she went on to become one of the first women artists to ever have a solo exhibit in California. In an era when it was unheard of for women to make their living as an artist, she persisted in hanging our her sign, "Mary Stevens, Professional Artist."

In 1875, at the age of 33, Fish and her mother traveled by train to Los Angeles and came to live in Carpinteria, California. She studied art with the prominent landscape painter Henry Chapman Ford who also arrived in Carpinteria in 1875 with his wife.

In May 1882, Mary opened her own studio in Santa Barbara, on Anapamu Street. This established her as the first professional woman artist in the Central Coast and one of the first in California. She also took in students for instruction. During this period she continued to paint local adobes and missions as well as landacapes. In 1886 Fish and Ella Goodwin published a unique booklet of hand-painted scenes and flowers with accompanying verse. Several copies remain.

In late 1886, Mary Fish moved to Los Angeles and tried to make a living from her painting. Times were hard for her, and she moved many times in a few years. In 1894 and in poor health, she returned to Carpinteria to live at Walker Place at the foot of Shepard's Mesa. Mary Fish died on April 10, 1895. She was 54 years old. She never married. She is buried in Carpinteria, California.

July 6, 1878 [San Luis Obispo Tribune]: “ Mr. and Mrs. H. C. Ford, J. G. Lemmon, Mrs. H. G. Otis, Miss Mary Fish and Mr. George Webster, of Santa barbara, passed through our city on Tuesday last, en route to the Yosemite. Mr. Ford is an artist, and will take sketches along the route of all the principal places of interest. Mr. J. G. Lemmon is a botanist, entomologist and ornithologist. He will make it his duty to gather everything in his business that is new, and send to the Academy of Science at San Francisco. Mrs. H. G. Otis, the wife of the editor of the Santa Barbara Press, will from time to time, transmit effusions from her pen to the Press, and we presume they will be read with interest. The party propose to be on their trip for about four months, and will return in October.”

August 19, 1878 [SBWP]: “ Santa Barbara Art and Artists. Last evening a feast of good things was enjoyed by the lovers of art at Miss Plummer's rooms on State Street. There was a fine display of paintings and the social element was charming. Altogether about two hundred people visited the rooms in the course of the evening and all seemed to enjoy this first step of Santa Barbara toward the creation of a well-defined art circle in our progressive city...For the benefit of those who were not present at the reception, I will mention most of the pictures on exhibition, with names of the artists:

September 30, 1878 [SBMP]: “ Return of the artist Ford and Party. Mr. Henry C. Ford and party, consisting of the artist and wife, Mrs. Otis, correspondent of the Press, Miss Mary Fish, and Mr. George Webster, arrived from the Yosemite last Saturday evening at 6 o'clock, glad to be home in Santa Barbara once more. They have made a notable wagon and tenting trip of fourteen weeks, during which they traveled more than eight hundred miles and saw a large amount of California out of doors. Going to the Yosemite to see and study it, they set about their pleasant task deliberately and with loving and conscientious devotion to the grand subject. Instead of "doing" the valley after the fashion of the average tourist, in a "flying trip" and a few days, they spent weeks there, and took it in detail, peak by peak, point by point; and it is safe to say that few tourists have come away with a better knowledge of this wonder work of Nature, or with a truer conception of its magnificent grandeur and its sublime beauties. Their studies and conceptions are embodied in the artist's numerous sketches, made with reverent and loving care, and in our correspondent's letters, written under the grand inspiration of the majestic mountains and in sympathy with Nature in her noblest creations. Having brushed off the dust of travel and doffed the hardy habiliments of camp for the festive garments of an effete civilization, so to speak, the members of the party are ready to meet and greet their friends at home. As soon as the artist brushes up and retouches his Yosemite sketches, he will be pleased, no doubt, to show them to all who may call at this studio.”

November 16, 1880 [SBMP]: “ Last evening the members of the Chatauqua Literary and Scientific Circle had a very pleasant meeting at the residence of Miss Mary Fish. There was a very full attendance, and the class manifested great zeal and interest in the work. It was decided to organize a circle to be known as the Santa Barbara Local Circle, and the following officers were elected...”