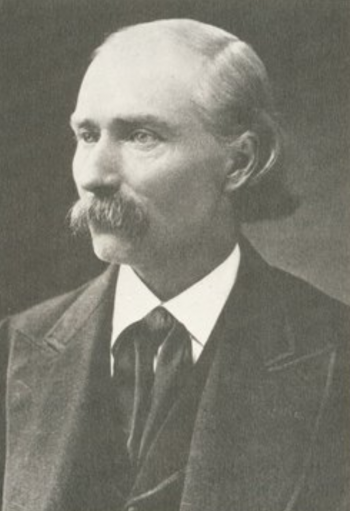 Henry Chapman Ford in Chicago, prior to his move to Santa Barbara in 1875. 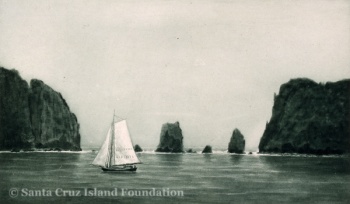 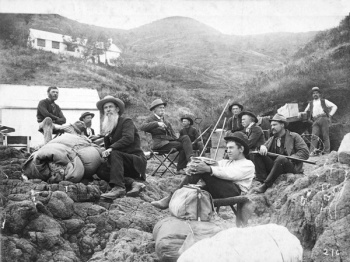 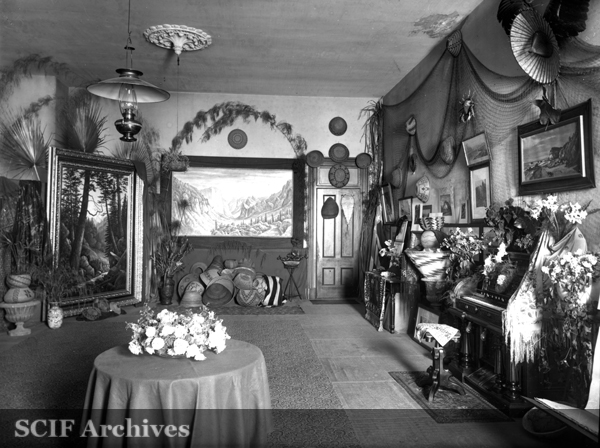 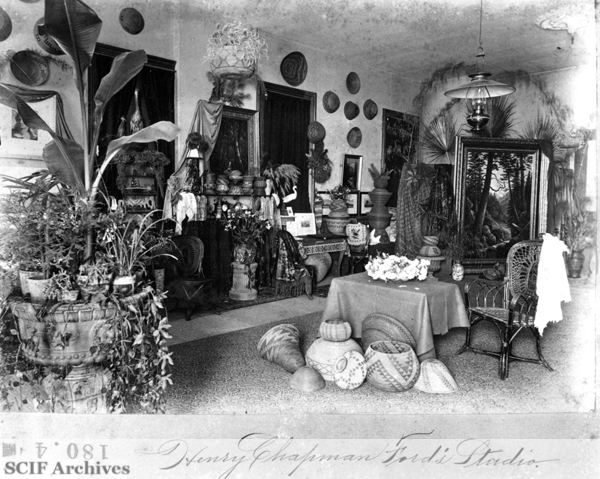 FORD, Henry Chapman (1828-1894), New York-born artist and founding member of the Chicago Academy of Design where for several years he served as president. He pursued his studies in Paris, France and Florence, Italy during the late 1850s. Ford was a Civil War illustrator and veteran, and as soon as he was discharged from service, he settled in Chicago, Illinois where he became an accomplished landscapist, "the first professional landscape painter in that city." He was one of the founders of the Chicago Academy of Design and served as President in 1873. The studio that Ford kept in Chicago burned down in 1871.

In 1875 at age 47, Ford moved to Santa Barbara where he spent the rest of his life. He is primarily known for his etchings of the California missions. It is said his arrival signaled the beginning of the city becoming known as a significant art colony.

Ford was very interested in archaeology, botany and geology, and is known to have made multiple trips to the islands over several years. He camped on Anacapa Island for 10 days in 1889, and he is known to have painted at least one large oil on canvas of Santa Cruz Island. He was one of the original founders of the Santa Barbara Natural History Society in 1876 with his close friend, Lorenzo Yates, and he also served as president of the society. Together Ford and Yates collected plants, including a number of ferns, on Santa Cruz Island in April, 1887 and again in 1890. Yates named a new shell from Santa Barbara County, Venus fordii, stating: “I take pleasure in dedicating this shell to Mr. H. C. Ford, who has for many years presided at the meetings of our [Santa Barbara] Society of Natural History.”

September 21, 1875 [SBDP]: “Mr. Ford, having been offered a passage to the islands in the U.S. steamer Hassler, has availed himself of that courtesy, and consequently his pictures will remain on view in the Odd Fellows’ building the whole of this week.”

September 22, 1875 [SBDP]: “On his return from the islands Mr. Ford will occupy a studio on the second floor of the Odd Fellows’ building.”

January 17, 1878 [SBDP]: “Mr. Ford is spending a few days at his country place, and making numerous additions to the list of plants in his botanical gardens…”

April 4, 1878 [SBDP]: “Our amateur naturalists. At the last meeting of the Society of Natural History, as the expected article on ferns was not forthcoming, H. C. Ford read an article by Prof. J. G. Lemmon on the Darlingtonia californica… Miss Plummer exhibited a specimen of Leptoyne giganteam from Santa Cruz Island…”

August 9, 1882 [SBDP]: “Mr. and Mrs. H. C. Ford leave on the Ancon this evening for a few months of eastern travel. We wish them in equal proportion as a result of this absence, a large allowance of health, pleasure and profit, as well as a speedy return. Their plan is to arrive here about the first of January. Mr. Ford hopes to sketch some of the scenery of the Southern route, a region with which few of us are familiar. Careful studies of that section cannot fail to have a permanent value. A warm welcome will await Mr. and Mrs. Ford on their return.”

January 31, 1885 [SBDP]: “The strange crustacean caught lately at the end of the wharf by Larco’s son, with a fishhook, is pronounced by Mr. Ford as belonging to the order Stomapoda of the group of Crustaceans… It is from the shallow water of the Channel and is said to be new to the fishermen…”

May 8, 1887 [SBMP]: “Tent and sail. Afloat and ashore at the Island of the Holy Cross. In the sea lion’s liar… Last week a memorable trip was made to Santa Cruz Island by a party made up of the following persons: Mr. And Mrs. Frank Sleeth, Mr. Eltinge Roe, son of E. P. Roe the novelist, H. C. Ford, the landscape painter, Mrs. Ford, Mrs. E. A. Otis of the Los Angeles Times corporation, Miss Sadie Roe, Mr. and Mrs. W. G. Kinsell of the Press. The taunt and trim little sloop Genova manned by Captain Andre Larco and sailor Joe, sailed away to the west…”

June 15, 1887 [SBDI]: “Mr. H. C. Ford, the artist, will hold a reception at his studio in the Odd Fellows’ building tomorrow (Thursday) afternoon. He will have on hand water color studies made on his recent trip to Santa Cruz Island and the San Rafael mountains, showing the novel, striking and interesting features of those localities.

August 17, 1889 [SBMP]: “The Channel Islands. A ten day’s cruise among their wonderful caverns. One of the most enjoyable places to visit for change of scenery, recreation, and obtaining a good appetite is the eastern of the Channel Islands which is formed by the Anacapas group… Our party consisted of delegations from the Natural History Society, the Grand Army, artists, professional men, mechanics and merchants, the majority of whom were artists and amateur scientists. The artists were Prof. H. C. Ford, Mr. Wm. Ford, and Mr. I. N. Cook the photographer; Mr. I. B. Hardy, contractor, Mr. Wm. Noble and his son, Mr. Harry Jenkins, and the writer. We chartered Captain Elliott’s sloop Brisk, Hugh Walter, Master, and arrived off the Anacapas some time in the first night…”

March 8, 1890 [SBDI]: “The Natural History Society met Saturday afternoon, March 1. The corresponding secretary handed the treasury a receipt for $2.50—amount paid by the society for Pittonia, a botanical publication edited by Prof. E. L. Greene of the State University at Berkeley... The President read a carefully prepared list of shrubs and trees on Santa Cruz Island by H. C. Ford…”

July 31, 1890 [SBMP]: “Some of the interesting features of the Anacapas sketched by Mr Ford. A visit to his studio. Look across the beautiful channel waters to where their mountained isles lie sleeping. They are an every day picture in Santa Barbara’s landscape, and ages ago they were linked with its mainland shores… Santa Barbara has one man — her artist Ford — who has studied them faithfully; who has climbed their precipitous heights; penetrated their rock-roofed caves with their watery floors; sailed beneath their mighty arches, which the seas have gnawed in their basaltic sides, and reproduced them in colors of Nature’s own upon his canvas… But especially attractive are his recent water color paintings of various island scenes. If you cannot go to the islands, he can bring the islands to you in his studio. Most pleasing are the various views which he presents of the three Anacapas…”

July 24, 1891 [SBMP]: “Prof. H. C. Ford , Josiah Doulton, I. B. Hardy and W. E. Noble left yesterday in the Lottie, Captain Burtis, for the islands. They will be absent about ten days, and will visit San Miguel, Santa Rosa and Anacapa islands.”

March 1, 1894 "In the midst of his paintings, oil and water colors, art treasures and in a coffin laden with floral tributes lay the body of the late artist, Professor H. C. Ford, during Wednesday morning…”

January 31, 1909 [SBMP]: “Professor Yates passes away… In 1881 at the instigation of the late Dr. Dimmick, Dr. Yates moved to this city and began the practice of dentistry. He named all the undetermined specimens embraced in the private collection of Professor H. C. Ford, Dr. Dimmick and Stephen Bowers, besides adding from his own duplication…”