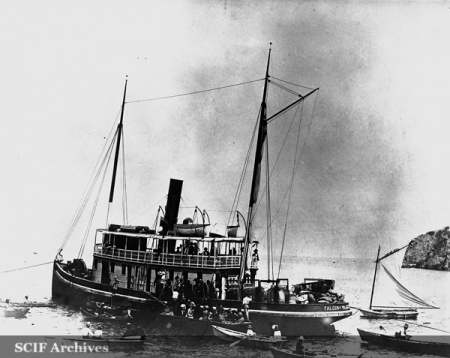 Arrival of the Falcon 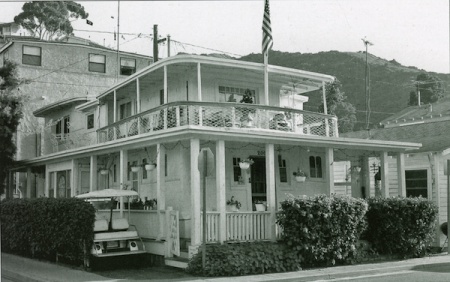 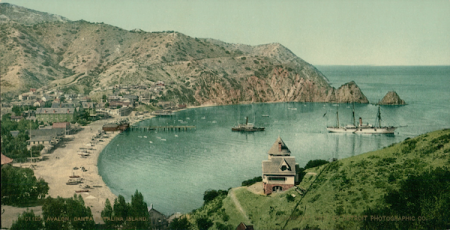 Falcon was later remodeled and converted into a double-deck passenger ship. By 1888 the steamers Falcon, Ferndale and Eureka were all making the run from San Pedro to Santa Catalina Island. Falcon made her first trip to the island in 1886, and served Santa Catalina Island through the turn of the century.

On June 18, 1915 Falcon was sold to F. Lindsay, San Francisco, who used her exclusively as a tugboat. On July 10, 1915 Pontus Stanbourg and Martin Oldenbourg acquired an interest in her. On September 27, 1915 Stanbourg sold out his interest to Lindsay and Oldenbourg. From then on, various owners had interests in Falcon for short periods. On August 26, 1944 her sole owner was Ernest A. Judd. On March 23, 1945 Falcon was sunk off the Standard Oil Pier, El Segundo, California.

Today, an Avalon house located on the corner of Third Street and Descanso Avenue, built just after the turn of the century, used dismantled pieces of both the Falcon and Warrior. [Huntington. Banning Collection. Album 180(419a)]

July 30, 1886 [KEJI]: “My trip this summer to Santa Catalina Island… We started for home on the steamer Falcon to San Pedro…”

July 13, 1893 [SBDI]: “The Santa Fe office in this city is advised by General Passenger Agent Thompson that the steamer Falcon having been withdrawn from service, there will be no steamer plying between Avalon, Catalina Island and Redondo on Sundays, until further notice.”

June 7, 1894 [LAT/SCat]: “A great amount of interest is manifested in the inauguration of The Times’ special carrier pigeon service between Los Angeles and the island. This letter is to be dispatched under this novel system of transportation. The pigeons, sixteen in number, arrived in good condition on the Falcon yesterday…”

February 19, 1895 [LAH]: “The steamship Falcon is being repainted and renovated. For the next ten days, the W.T.Co's staunch and last ocean tug Warrior will make daily trips, Sundays excepted. The company reserved the right to change steamers and their days of sailing.”

May 17, 1903 [LAT/SCat]: “Avalon. The sheep men are having all sorts of picnics in rounding up the island sheep to place them in enclosures recently fenced off for their reception. Wednesday the rodeo resulted in corralling 1200 sheep and 100 goats. Thursday after an all-day chase in which their horses were run to a standstill, and the men in little better condition, they had about fifteen hundred sheep just at the entrance of the chute leading into the corral, when three burros which have been running wild on the island for a number of years, appeared at the mouth of the chute and started a stampede among the sheep which it was impossible to stay, and the entire number fled to their fastness in the canyons, leaving half a dozen riders saying things that would have burnt blue holes in the fleece of every one of them. The Banning Wool Company shipped 500 fine wethers today from Empire per steamer Falcon to the Los Angeles markets, and this will be followed by others.”

July 18, 1905 [LAT/SP]: “Captain Disler makes charges against Falcon. John H. Disler of this city, owner of the launch O.K. of San Pedro, had a thrilling experience Saturday morning in mid-channel off Catalina. Disler was returning, after taking Joe Singer and half a dozen other sportsmen to San Clemente Island for a goat hunt, and was exhausted with the run over. When about nine miles out of Avalon homeward bound, the O.K.’s crank shaft broke… the steamer Falcon came up with a load of passengers, and passed within half a mile. Additional signals of distress were made, but Mr. Disler states that the Falcon passed them up apparently unnoticed, though he avers the crew and passengers were looking his way… Captain Disler stated yesterday that the Falcon might have picked him up without losing more than fifteen minutes or going half a mile out of her course.”

April 28, 1906 [LAT/SCat]: “Avalon. W. B. Alexander, buyer for the Simon Maier Packing Company, is here superintending the shipment of two boatloads of Catalina mutton today. The schooner Brothers and the Falcon were loaded at Empire this morning...”

April 4, 1916 [TI/Avalon]: “Some recollections of the Avalon of twenty-five years ago… The little steamer Falcon brought the first passengers that came by steamer and they were landed on the beach in skiffs. Soon a wharf was built…”